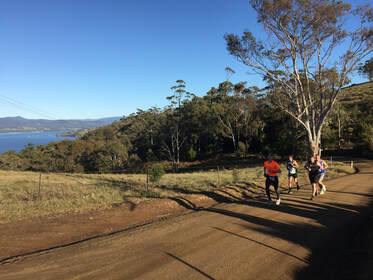 In what is becoming a semi-regular pilgrimage, I made my way down to Bruny Island on Friday night ready for the Bruny Ultra the following day.  The forecast was a bit foreboding, but I figured ignoring meteorologists has been working for the Liberal Party so hopefully it would work for me too.

Driving to the start line was electrifying- the sun was rising behind us and mist was rising off the still water of the bays we drove through.  We got to the start line to cheer for a few runners I knew setting off.  I was particularly excited to see my friend, Naomi starting her first ultramarathon.

​After stuffing around for 20 minutes and generally getting less done than Josh Frydenberg in a crisis, we were eventually ready to start.  My regular ‘Bruny buddy’, Lewinski, was joining me of course and the lovely Annie would be Mum to both of us for the day, as long as we stayed within reasonable distance.  We were also joined this year by Marcus, as well as Will from Team Runphoria, who was going to keep us company for the first 12km.

For a number of reasons I have had to be pretty creative with my training schedule this year, which has meant I have done most of training on my own.  So I was super excited to be lining up with this awesome bunch.
​
We set off up the hill at an easy pace chatting cheerfully as we ran and enjoying the stillness of the morning.  The views of the bays on either side of the ridge are pretty epic and aside from our chatter (I say ‘our’ but I suspect I was responsible for about 70% of it) it was quieter than a climate change denier during bushfire season.

I had been a little cool at the start, but quickly warmed up and my blind optimism from the previous day had actually been reward with a milder morning than I had expected (individual experiences may vary, this is not intended as anecdotal support for ignoring climate scientist, Mr Morrison).  After taking it easy on the initial climb we leant into the downhill and let our pace pick up naturally. The scenery, the cool air and the steady conversation (not to mention fresh legs) made this a really pleasant start. 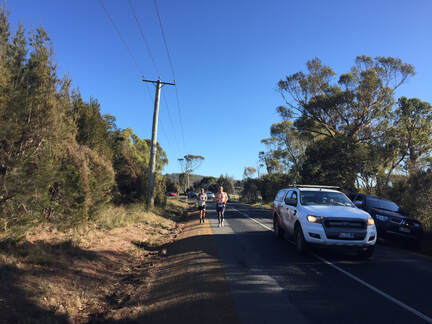 I had wondered if I’d regret not packing more warm clothes to run in, but it was actually perfect.  I hadn’t expected to be able to lose the shirt and run in comfort, but within about 5km I was already heating up rapidly.  It was instant relief when I threw my shirt into the car and knew I wouldn't have to think about chafing for the rest of the run.

We hit the main road after about ten kilometres and noted we were about a minute slower than the previous year.  We were actually pretty happy about that as all three of us felt we had gone a bit hard and wanted to try for a more consistent race this time.  But of course as soon as we hit the smooth gentle downhill of the main road, any thoughts of going slow disappeared for a while and we let momentum carry us for a few kilometres before eventually settling back into something approaching our target speed again.

​We said goodbye to Will as we met up the rest of the Runphoria team, but we were carried along by their support for many kilometres more, with Maddie running another leg with us and Simon, Elaine, Courto and Xavier all giving encouragement at different times.

It was still cool and still by the time we hit the neck, but we were definitely seeing more cars and runners.  Given that the two topless blokes I was running with appeared to have negative body fat (I know- I didn't think that was possible either), I was slightly worried about them causing a traffic accident, but my fears proved as baseless as the moronic ‘Muslims are going to stop you celebrating Christmas,’ dog whistles that have been happening at this time of year for the last decade.

​We met up with Naomi a little bit after the Neck and shared a few jokes before continuing on.  There are a couple of decent hills on the run into Allonah (and plenty more after as well actually) and we deliberately dropped our pace and cruised our way up as easily as possible, not wanting to burn too much physical or mental energy on them.  I saw another friend, Tash, on another of these hills and shared a bit of banter as we passed.  These little exchanges of friendly conversation with other runners are one of the things that I really love about this race. 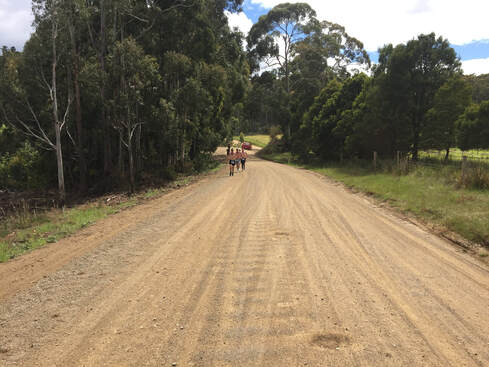 Having expected to run in long sleeves through the rain, I hadn’t put much sunscreen on, but as it got closer to 10am, I had no intention of putting more clothes back on so we had to make a short stop at the 38km mark to coat up in sunscreen.  We only stopped for less time than it takes for Alan Jones to embarrass himself and then we were away again, feeling pretty good as we ran through Allonah and began the climb up the hill the other side. We rewarded ourselves with passing the marathon mark and another long hill with cold oranges, making Annie feel even more like a soccer mum.

I did another time check at this point and I was about two and half minutes slower than the same point last year.  I was happy with that as I hadn’t wanted to drop too much time, but definitely wanted to keep a bit more strength for the final third.  Marcus announced he had just run a marathon PB, which was pretty crazy considering the hills we had already run and how strongly he was running!

Having run this race a few times now I knew that the main challenge came in the final 14km of hills from Lunawanna to the end.  And while I was really up for this challenge I struggled a little bit mentally in the 10km before this.  I was beginning to feel like I was losing a bit of strength and could feel considerable pain in my knee and feet along with developing fatigue in my quads.  As a result I was beginning to worry about just what state I would even be in by the time I got the challenge I had set myself for. 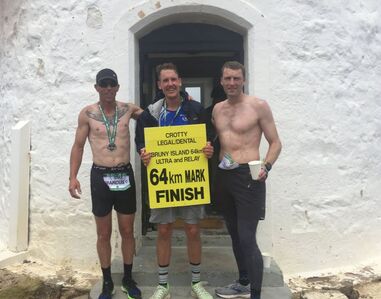 After what seemed a long time we were finally onto the gravelly road to the lighthouse.  A sign to motorists advised we were something like 25 minutes (I think that was the number but Angus Taylor has set the bar so low for truth in public discourse now that it doesn’t seem to matter if I’m telling a mistruth) from the lighthouse and I tried to joke that it was meant for us, but all three of us were hurting a bit by now so the joke fell flatter than Australia’s wage growth over the last decade.

​It had been awesome to run so far with two legends but as we finally started to separate on the long hills.  With ten kilometres to go, we all just had to finish the race as best we could.  My swollen feet were killing me by now and the kilometres were going by pretty slowly.

After holding a very consistent average pace to 45k, it had begun to slow since then.  Looking ahead was a bit dispiriting with the distance seeming to stretch so I put my head down and tried not to think about how badly I wanted to reach the finish line.  Some runners I know try to contextualise the hardest parts of the race by reminding themselves there are worse things happening in the world, which would have been super easy given the Medevac Repeal legislation was likely to be passed the following week (seriously all jokes aside, the people that voted for that are irredeemable monsters), but I have never found this type of thinking particularly helpful for myself.   Instead I just focused on keeping my feet on the uneven ground and trying to stay strong through to the end of the race.

The brutal climbs were interspersed with steep descents which were mildly hazardous on the uneven dirt roads.  Every now and then I would hear the rapid footsteps of a team runner quickly catching and overtaking me, before they soon disappeared into the distance.  At about 60km I was passed by a runner who looked about 12.  This was a bit of moment for me and I decided maybe I had a bit more left in the tank.

​I attacked the final 4km with renewed intensity, gritting my teeth through the building pain in my feet and quads.  Although it wasn’t much fun at the time, this final burst of effort got me most of the way to the end before cramping in my legs forced me to slow a little once more.  The last section of road was busy with cars so it took a bit of weaving and the occasional jump into the bush beside the road to get through, but eventually I passed the boom gate and made my way to base of the final hill.

​I was more sore than Kevin Rudd's pride by now, but managed to keep running (or at least imitate a running action in slow motion) right to the top, taking great satisfaction in stepping on the finish plate and finally coming to a stop. Despite separating in the last ten kilometres, Lewinski, Marcus and I still all finished within a couple of minutes and we were quickly reunited and thanking each other for making the run so much easier than if we had run on our own. 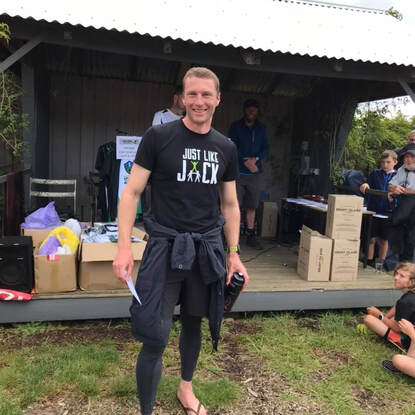 Although we were encouraged to head back to Allonah where there is an excellent recovery function set up at the pub, I love watching people finish so I stayed at the lighthouse for a couple of hours after.   I saw many friends finish in that time, especially from Tasmanian Road Runners and Solemates, so I spent most of my time chatting away.  But I was especially thrilled to see Naomi finish, supported by Team Runphoria (who seemed to spend the whole day running support with different solo runners).

Eventually we began the slow shuffle back down the hill to find the car and head back to Allonah.  Despite running a relatively similar time to last year, I was in markedly better spirits.  Having paced the race a little better, the final section had still been really hard, but nowhere near as demoralising as it was last year.

As I drove back towards the ferry, I could only think what an amazing day it had been in every way.  I was (and continue to be) grateful to the two guys I ran with and all the people who offered support and encouragement on the day, the organisers and volunteers who made it possible and of course the wonderful Annie, without whom I wouldn’t have even finished the race.
Powered by