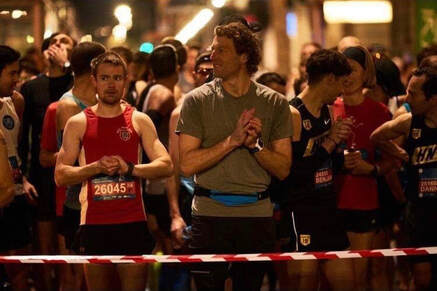 Apart from the Point to Pinnacle, which is a little different, I don’t run a lot of half marathons, but I had heard a number of my friends rave about Run Melbourne over the past few years.  So when circumstances aligned to make it fit nicely this year, I was pretty happy to give it a crack.

Interstate running trips are always fun and some of my favourites were also coming up for this trip so by the time I got to Melbourne on the Saturday I was excited.  Fast forward to early the next morning and I’m waiting a little nervously in the starting bay, with a fair bit of uncertainty about how this race will actually unfold.

The starter must have been as excited as me, because the countdown had only reached three when the starting siren went off and we accelerated out of the starting gate and down Flinders Street, before turning and crossing Queens’ Bridge.  Once across the bridge, we turned right and followed the river past Crown Casino.  Having read the recent revelations about Crown’s nefarious activities, I kept my eye out for anyone who might be involved in organised crime.  There were a few people hanging around but, no one was decked out like a 1930’s mobster.  Still, I figure nothing good happens at Crown Casino early in the morning, or any casino for that matter (yeah you heard me, Federal Group- piss off out of my state).
​
We soon crossed the Yarra once more, before turning into Collins Street and being caught out by the first of a number of unexpected little hills that were a little harder than I had anticipated.  I was pretty relieved to get to the crest the rise and run down the other side into Docklands. 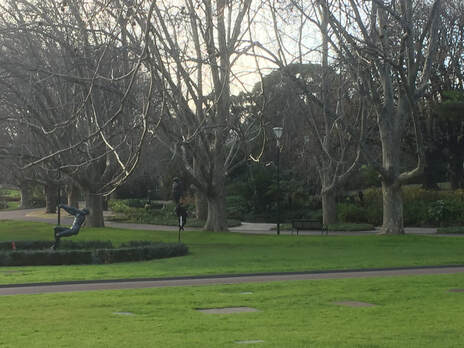 By the time we were running past Marvel Stadium, I had settled into what felt like a pretty consistent, but challenging, pace.  I was pleasantly surprised at this, as I’m often caught up by the excitement and the speed of the runners around me at the start of a race and end up running my first few kilometres a bit quick.  Today I was determined that wasn’t going to happen.  As a stream of runners passed me in the first kilometre, I had kept a close eye on my watch to ensure my pace didn’t rise.  I actually spent so much time looking at digital numbers on a screen, I could have been watching an episode of 24.

We looped around the far end of Docklands and came back, passing the latter section of the field as they were going the other way.  We crossed the river once more via the Webb Bridge, which forced me to momentarily drop some speed as it doubled back on itself more than arguments against renewable energy.

​The next section of the race was particularly pleasant, as we followed the edge of the river along Southbank for about a kilometre before passing under the Princes’ Bridge and turning away from the river following winding tree-lined paths around the park.  We briefly returned to St Kilda Road before heading up past the Tan on what seemed an unnecessarily circuitous and hilly route.

​Unlike arguments about Israel Folou’s right to free speech, I’d been able to maintain a lot of consistency to this point.  I was tucked in with a group of three other runners as we began the first gentle climb.  However my companions slowed noticeable as we began the first gentle climb.  As I mentioned earlier, I had little confidence in my own race plan (or lack thereof) so I was tempted to drop some pace to stay with the group.  I was feeling too good to slow down though so I struck out on my own, hoping this didn’t cost me at the back end of the race. 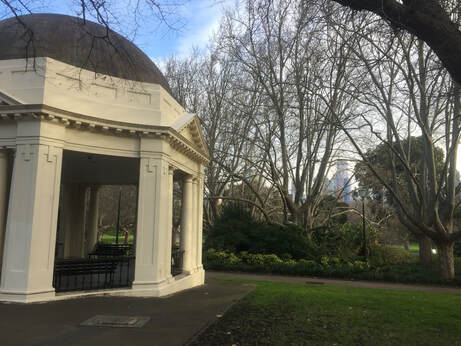 After a full lap of the Tan and a few other turns and cutbacks, we were heading back towards the Yarra, crossing further upriver at the Swan Street Bridge and then following Batman Avenue back towards the CBD.  I was actually a bit worried as we ran close to the Herald Sun building.  Based on the writings of its employees, it seems that anyone who spends too much time there develops an irrational fear of refugees, Muslims and renewable energy.  Whilst I didn’t notice any signs of xenophobia rising in me as I approached, but I was relieved to be able to turn around the marker and run back over the Batman Bridge (it was probably the fastest I ran all day).

With around a quarter of the run to go, I was starting to feel a bit of fatigue in the legs and the kilometres were ticking over a lot slower than previously, but as long as the course stayed flat I wasn’t slowing down yet.  But the course didn’t stay flat.
After the Tan, I had assumed I had pretty much finished most of the hills, but there was a surprising amount of climbing left in the last quarter of the race.  I ran up a ramp and over a bridge (another one) crossing the railways next to the MCG, then followed the concourse around to another gentle rise than felt anything but gentle.

After a bit more sharp cutbacks through the parkland, the path led us down a gentle slope back to the Yarra where we turned right and began to make our way towards the finish.  It had been about 18 months since I ran my last and only other flat half marathon and my preparation had been anything but thorough so I was not real confident in my race plan or ability to hold my pace for the whole run.  In fact there were computer programmers in December 1999 who were less worried about a crash than I was (for those of you too young to remember that is a Y2K reference- you can ask your parents). 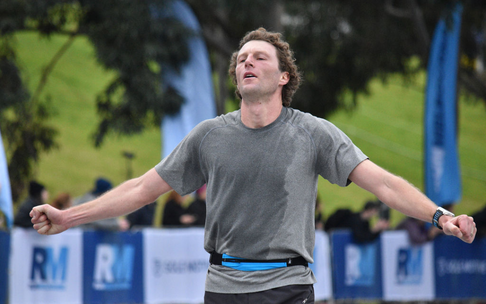 But just like Y2K, the crash I was expecting never happened.  I was able to lean in a little bit in the final two kilometres and increase speed slightly.  We ran hard along the flat section next to the river before following Jolimont Street to a left turn leading to the final climb of the run on Wellington Parade.  Having run the Melbourne Marathon a few times, I knew this was coming before we hit the turn, so it was less of a psychological blow than it would have been otherwise, but at the time I still wasn’t thrilled about it.

But the hill wasn’t going anywhere so I put my head down and just let my feet carry me as I concentrated on keeping my arms and legs moving.  I crested the hill (uncomfortably close to the Herald Sun building once more) and began to pick up speed again as I sensed how close I was to the finish.

I crossed the Batman Bridge for the third time and turned right into an extended finish chute at the bottom.  There was plenty of noise as I ran the final hundred metres before the chute opened out into a wider finishing gate, which I ran under thankfully.   I took a few relieved slower breaths and swapped congratulations with athletes I had seen on the course, before collecting my medal and about five glasses of water from the wonderful volunteers who I was sure to thank gratefully on my way through.   Full results for the event are at this link.

As with any race, the joy and excitement didn’t end when I crossed the finish line.  With so many other friends in the race I got to see many awesome people (I actually teared up a little seeing my amazing wife refusing to let illness stop her from completing her comeback race after giving birth to our daughter last year) crossing the line and relive highlights of the race as we shared our experiences.  The rest of the day was spent with good friends, basking in sunshine and the satisfaction at having thrown everything I had at the race and the anticipation of what race I will sign up for next.
Powered by