A walk to Lake Rhona

Lake Rhona is truly as beautiful as people tell you.  It is like your actual surroundings have been photoshopped.  The water is incredibly dark, the sand is perfectly white and the grey cliffs that rise on each side are amazingly steep.  It is perhaps one of the most amazing natural places I have ever been to and being almost totally alone there with my wife for New Year’s Eve was an unforgettable experience.

What they don't tell you about Lake Rhona

But I have to state plainly that the walk to get there isn’t much fun.  I looked at track notes from several sites and books before leaving and they all noted that much of the track could be muddy and long, which I wasn’t too worried about even though my hiking boots are due to be replaced as they leak like federal cabinet.
What I was not expecting was how poor condition parts of the track are in.  There are large amounts of pushing your way through claustrophobic teatree that scratches you and obscures any sight of the land around you.  The track can also be fairly hard to follow, as it all but disappears in places or can lead you away with false trails; so- much like one off Peter Dutton’s text messages- it would be pretty easy to end up in totally the wrong place.
My information described the track as 5-7 hours depending on track conditions and fitness.  Unlike many walk descriptions (or Jane Holden’s payout after being sacked by the Tasmanian Government), this is by no means generous.  We were walking in the middle of a pretty dry summer and are both pretty fit, and it still took us more than six and a half.  The four or five other camping groups we came across in the three days we were there all took eight or more.
If you are looking for a walk that is enjoyable and varied as you go, this isn’t really it.  I recommend somewhere like Cape Raoul instead.  This is more of a long and at times boring walk that ends in a truly remarkable place.  We would do it again, but you should know what to expect.  You could walk in and out reasonably comfortably as an overnight walk, but that isn’t really giving you enough time to appreciate the best part of the walk, so I would strongly encourage anyone planning this walk to allow an extra night up at the lake to give you more time to enjoy the best part of it and do the four hour walk around Reed's Peak while you are there.

Getting to the track

Going for only two nights, we had the choice of packing light or massively over-catering with a gourmet selection of food.  Considering my well-known appetite and my wife’s well-known culinary skills it was no surprise we took the second option, after all, the lake was helicopter accessible so we had to be prepared for a surprise visit from Bronwyn Bishop.
After successfully avoiding breaking my back putting the packs in the car, we were off.  The drive out to Maydena was pretty easy with little traffic around, considering the time of year.  Soon after Maydena we turned right into Florentine Road (which isn’t actually signposted as such- the sign says Styx Valley instead).  From here you are on forestry roads that get progressively rougher as you get further from the main road.  I hadn’t found any indication that the roads were not accessible for 2WD cars such as my own, but I was approaching these roads with the same mistrust the Australian government anti-terror guidelines professed for alternative music.  Luckily the roads were fine, but it wouldn’t be a bad idea to have a saw in the car when you go.
Most directions tell you to go around 27km along Florentine Road and then turn left onto Tiger Road at a fork.  This is where it started to get a little interesting as we couldn’t see any sign for Tiger Road after 27km.  We did find an obvious fork and took the left hand option, which turned out to be the correct road.  After that, you drive for 3-4km until you again turn left onto Range Road (which is marked with a sign that is harder to see than a moral justification for offshore processing and its accompanying secrecy) and a further 3-4km until you turn left onto Terry Walch Road.  Our directions told us to then follow the G03 Spur after 3km, but we never saw any sign for this.  Basically Terry Walch road ends in a little fork with each part of the road going about 100m.  If you take the left hand fork you come to a car park with a descriptive sign saying, “Track” indicating where the walking track begins.

About two hours after we started walking, we reached Gordonvale, the moss-covered remnants of an old riverside prospecting settlement that was as antiquated as Tony Abbott’s social views.  We enjoyed a pleasant interlude and had some lunch before pressing on again, back out into the plain.
There wasn’t much interesting to say about the next few hours.  The plain climbs out of the valley in a series of rises before dropping down into marshy creeklines, over and over again.  In places near the creeklines the teatree grew very thick around the path.  Despite the season, the creeks were flowing freely so we could refill bottles each time we passed.
Another particularly green patch of forest surrounds another creekline and I remember thinking how pleasant it is walking in the cooler air past the mossy logs.  It stops seeming pleasant pretty quickly, as the track gets so muddy, I started expecting to find an ogre and a talking donkey living on it.  Thankfully this is quite a short section and we are soon back out under the blazing sun.
Three hours after leaving Gordonvale, and with scratches on my face and arms that suggested I had tried to give a tiger a prostate exam, we climbed to the top of yet another rise and turned to the west, beginning to approach the first of the true foothills ahead of the mountains around Lake Rhona.  As we got closer the gradient of the hills became more obvious.

The climb to Lake Rhona

They were steep.  Undeterred, the path seemed happy to go pretty much straight up, without wasting too much time with zigzags. There are two main hills, each with their own false tops along the way, and a flatter section that curves around to the right giving you some respite in between them.  The first hill is particularly brutal, as it is a pretty uneven path with plenty of rough steps and loose rocks, as well as the gradient itself.  As you finally crest the top of the first hill, you have a great moment to look around you at the cliffs rising around you and the huge plain extending below, then you turn your attention to the track and notice the next ridgeline you have to climb ahead of you.
It is quite an impressive, even intimidating, ridge.  Narrow, steep and climbing a long way.  Each side of the ridge declined sharply (like Australia when New Zealand’s offered to resettle asylum seekers detained offshore), with rugged cliffs climbing the other side.  It has to be said that, unlike the first climb, this one probably isn’t as bad as it looked.  The path seems a little easier to traverse and the incline is less than it appears.  Still it wouldn’t be much fun for those who don’t like heights.
Maybe a hundred metres from the top, a line of sticks has been made across the path in what seems a deliberate construction suggesting that path was the wrong way.  At the same time a second path extends around the side of the ridge (which has thankfully flattened out a little by now) to the right hand side.  Following this path around for a few hundred metres and Lake Rhona finally comes into view, nestled at the base of the cliffs, with straight-sided mountains embracing it from each side.  By now, we had been walking six and half hours, so we eagerly followed the windy path down and not long after were walking along the white sands of the beach.
The lake and the beach itself are both considerably larger than they look from higher up.  The black water was cool but not too cold, so we had a quick swim and prepared dinner.  We considered setting up in one of the campsites behind the dunes, but it was clear and still so we chose to sleep out on the beach and watch the stars.  It was a pretty prefect way to end a long day’s walk. 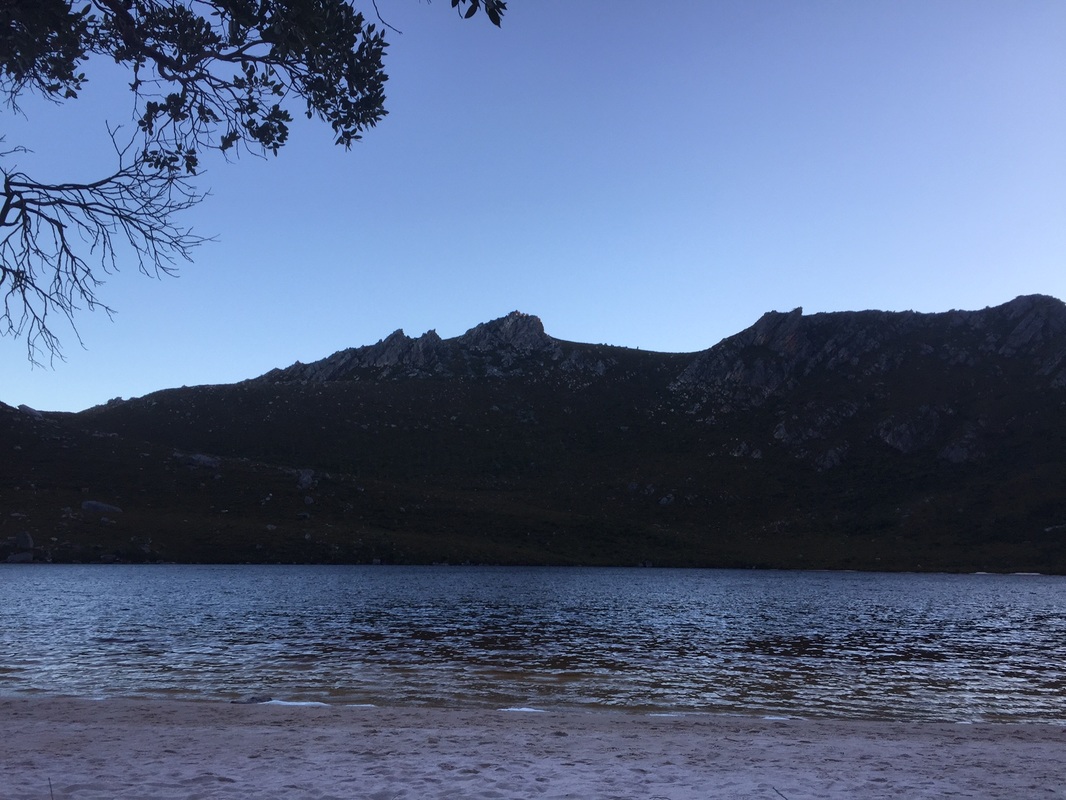