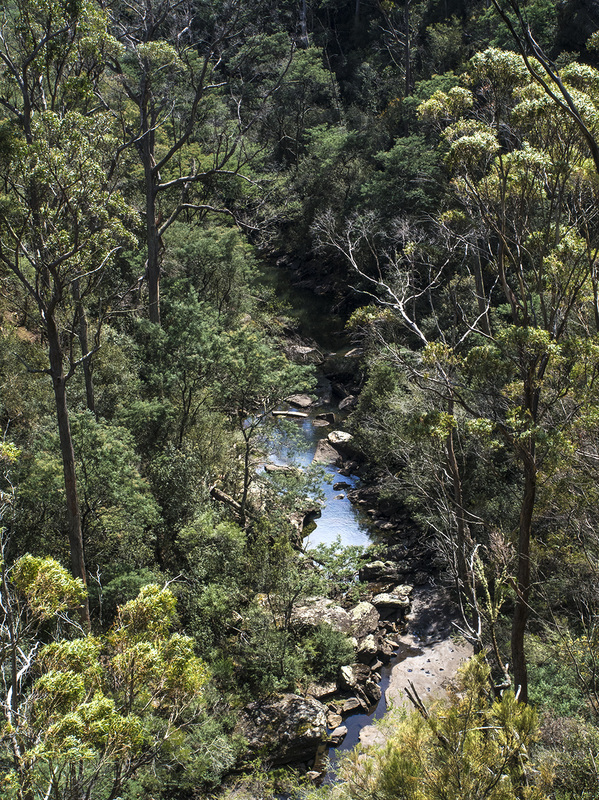 “Where is that?”  I asked my dad, when he suggested we have a look at Bluff River Gorge (I’m glad he didn’t mishear me as my exact reply could have had him turning up wearing a fox-skin hat).  So he sent me some notes made by someone else who had done the walk recently and I was suddenly very interested.
It turns out Bluff River Gorge is a steep narrow  gorge with some amazing sandstone cliffs either side of it.  The looping track around it has more erroneous branches than the Coalition has vested interests in the coal industry (anyone noticed what the first four letters of coalition spell?  #COALitionismazing) so it was pretty important that we stuck to the fresh tapes and referred back to notes when we were unsure.  For anyone thinking of doing this walk I would recommend you refer to these notes by Nick Monk for a much more detailed account of the route.

As I mentioned elsewhere, my leg rehab training load was a little less than I intended for the week. Even so, my legs were weaker than the Mineral Resources Rent Tax when I woke up this morning so I was a little thankful we weren’t scaling a big mountain for the day.
We drove out to Buckland and turned left on a road (C318) that would have immediately made my friends from the Buckland Birdwatching Club a little nervous.  After another ten minutes’ drive along this road, we came to the car park area where open fields changed to close terrain.  We parked and headed off down an easy to follow 4WD track with a green meadow on our right and a forest of closely grouped gums and bracken on our left.  The track became surprisingly sandy as it continued too.
A bright red arrow on a tree directed us to go right onto a smaller path and soon after a valley began to open up before us.  The track followed the top of the valley for a few minutes before it turned back up the hill, but a smaller track, still clearly marked by tape, began to snake its way down the side of the valley that was much greener countryside above it.

As we got lower into the valley, we made our way carefully through a small patch of some kind of stinging leaves that looked a lot like nettles I have seen in Europe.  I didn’t know a lot about these bushes, but I knew I didn’t like them- this is pretty much how I imagine Greg Hunt thinks about most plant life in the Australian environment- so I was pretty slow and deliberate making my way through and only got stung once.
Following the tapes wasn’t always as easy as it sounds, as we would occasionally find track junctions with tapes on both sides.  We soon found another of these choices as we dropped further into the gully.  There was an obvious path to our right, but what could have been a path to our left as well- and you could see tape in both directions.
Following the example of our government when confronted with a choice, we took the option that went furthest to the right.  We followed the distinctly marked track and quickly reached the bottom of the valley where we crossed a dry watercourse and began to climb as we made our way along the other side. 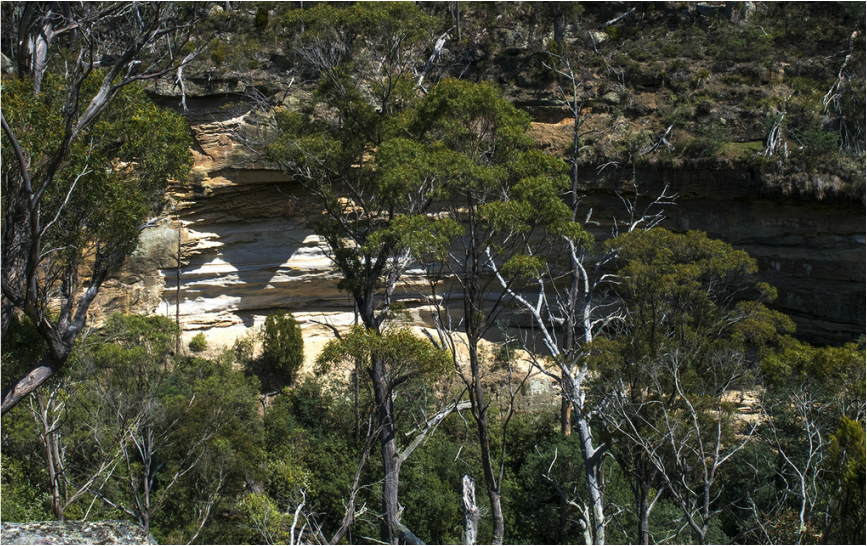 It was pretty impressive country, with the valley dropping deeper below us and rocky cliffs rising the other side, obscured by a patchy veil of tall trees.  On our side, we made our way around a series of patterned sandstone cliffs for about 15 minutes, until the track finally wound its way up and over the edge of the valley.  The view looking back was quite impressive, but with my phone dropping in and out of reception I couldn’t check in there, so I’m not really sure if it counts as actually experiencing it in this day and age.
A series of cairns and tapes led us to a 4WD track which we followed for a while before realising we were as out of place as Kate Ceberano’s thongs in the QANTAS lounge.  After a careful read back through the notes, we were pretty sure we should not have been on a vehicle track or have exited the gorge yet.  We backtracked to the edge of the valley and looked for an alternative set of tapes we might have missed, but couldn’t see it.
We slowly retraced our steps back through the valley, stopping several times to explore possible alternative tracks, but finding less credible alternatives than the liberal party have to Malcolm Turnbull.  After about 25 minutes, we were making our way back up the first side of the valley.  Just before we got to the stinging nettles that I had so bravely dealt with earlier, we came to the junction where we had chosen to go right and this time took the second less-obvious path back down the hill.  This time it went further to the left and dropped much further.  Eventually, like Peter Dutton’s morals, the valley could go no lower, levelling out with an easy crossing by a pool of water that was partially covered by a layer of fallen leaves. 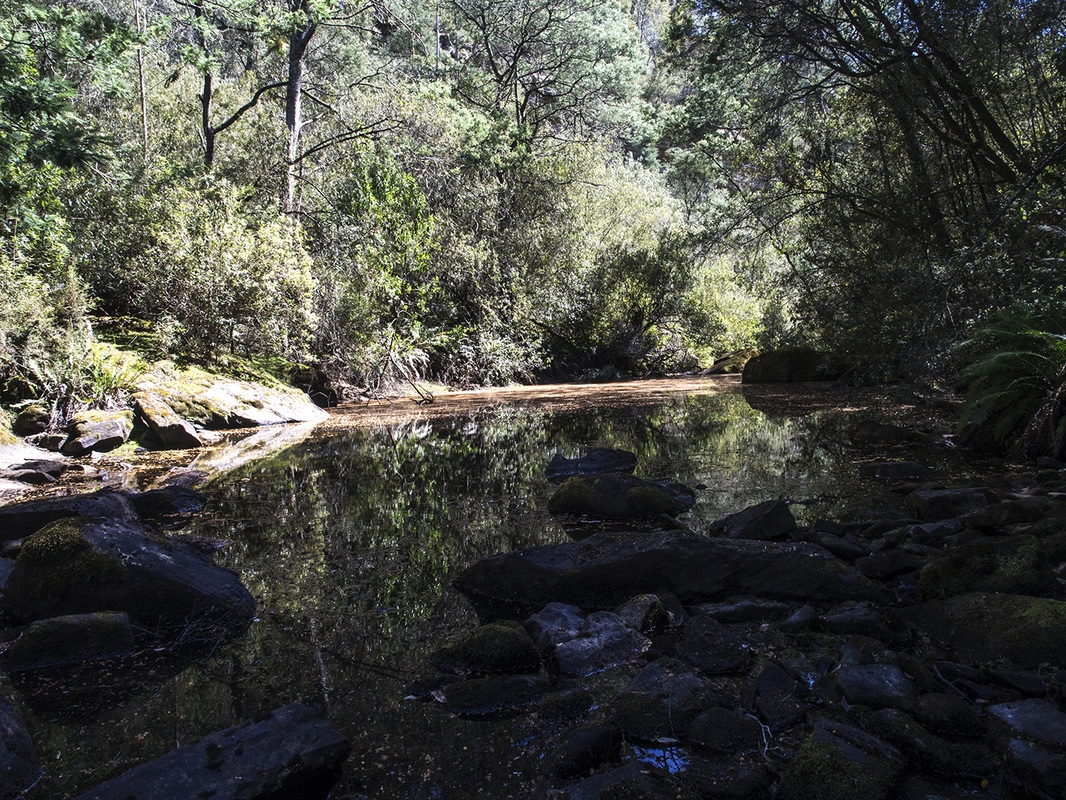 We were now in the gorge proper and we followed the edge of the water for a little while before the path turned back and climbed a little higher.  As we rounded a bend, the sandstone cliffs suddenly came into view.  It is hard to describe the size and intricacy of the cliffs so I will let some of the old man’s photography do it instead.  Looking up at the overhanging patterned ceiling was mesmerising.  You could follow each line of colour on a different and abstract journey across the cliff. 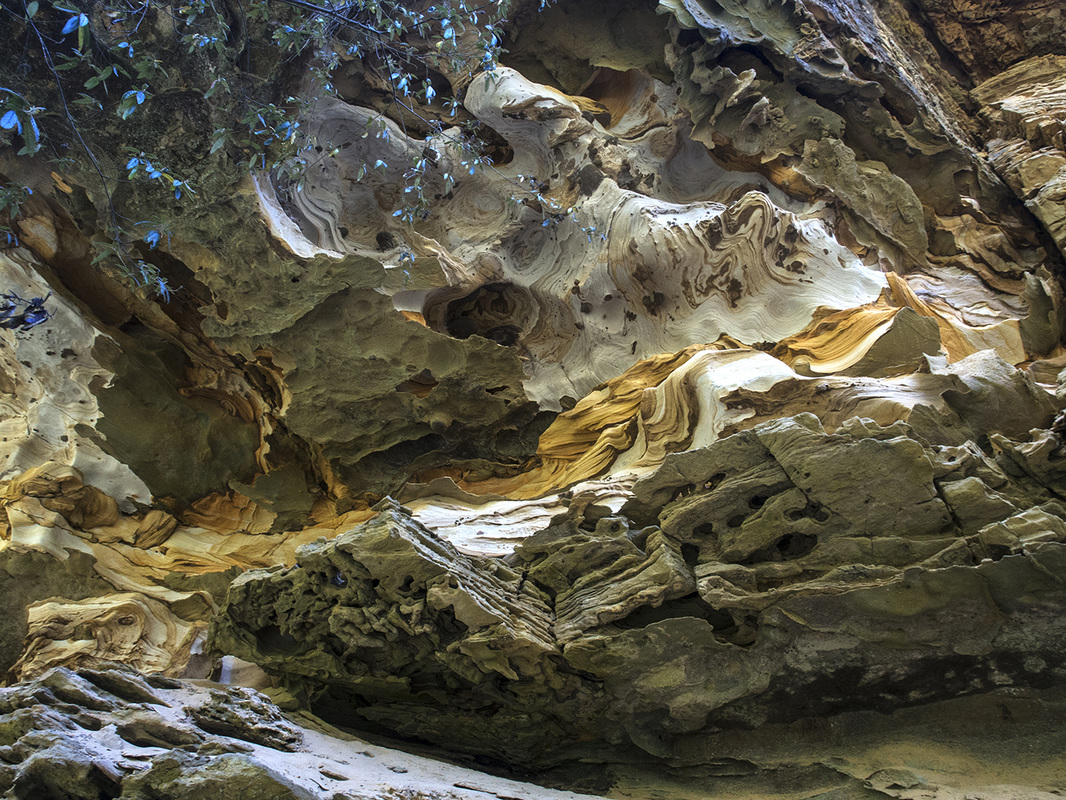 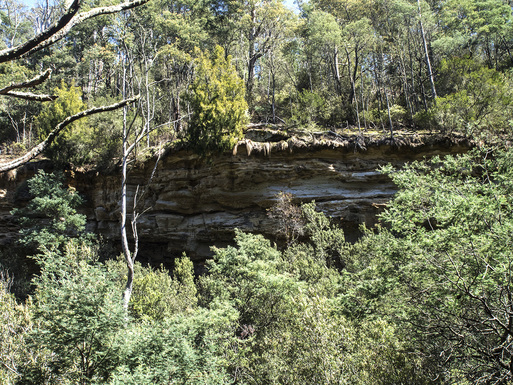 We followed the snaking path of the gorge, which at times seemed as directionless as the NBN rollout.  The valley walls were very steep with the ground dropping away quickly on our left and rising sharply on our right.  I had a new appreciation for how characters in the old arcade games such as Street Fighter felt, as I could only move forwards, backwards, up and down.  Occasionally the path would zig zag a little, as we slowly gained height until we were traversing the upper lip with occasional long walls of stone beside us and impressive views down to the river itself.
We continued to make our way around the top of the gorge for another 15 minutes until we reached a flattened open area where we stopped for lunch.  As we ate, we could look either way and see much of where we had come from and what was to come.  Across the gorge, more of the intricate sandstone cliffs rose in front of us, proudly showing off their patterned walls, like a Kardashian sensing a camera.
From time to time, the wind ripped through the gorge, like an STI through an overseas deployment of soldiers.  After the third gust like this, I was able to overcome my crippling fear of hat-hair (which I maintain is a legitimate phobia) and gave up on wearing the hat for a while.
From here the gorge began to curve around to the left and the track began to bring us lower again.    We crossed several dry re-entrants and continued past more of the caves and rock walls, but after a while, reached the base again and walked across the stepping stones that sat amidst the low stream. 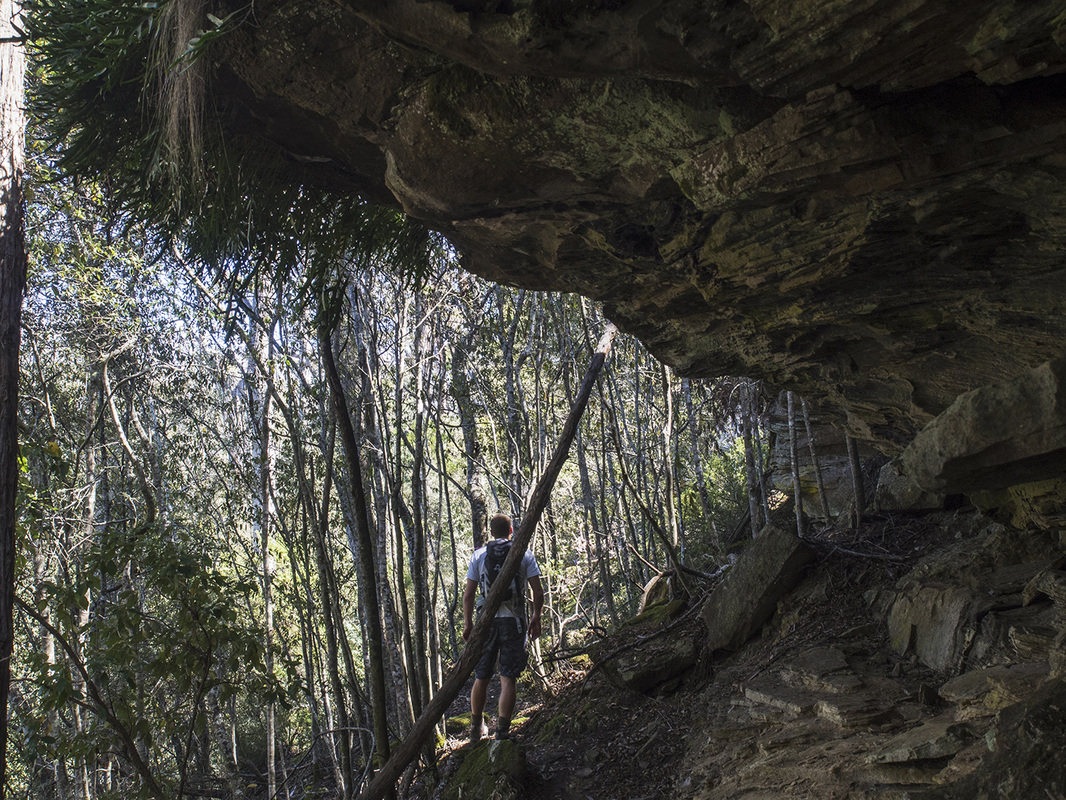 After crossing, we turned right and took a path that followed the river for another ten minutes or so.  It was clearly marked with tape, but we were expecting the track to turn left so started seeing possible tracks all over the place.  I imagine this is how Jacqui Lambie feels trying to identify terrorists.  Eventually, the expected turn arrived and we made out way up the steep slope of the hill.  The track took us back under a few more of the cliffs before coming out on an open outcropping that overlooked much of the gorge that seemed to bend around it like a transnational company bending around taxation laws.
After a quick drink and a snack, we followed the markers away from the gorge and soon found the original 4WD track we had started on.  Turning left, we strolled back casually over some easy ground for a while before we came to the tree with the red arrow, where we had left the path originally.  Not long after, we were back at the car and I was heading for a restful afternoon on the beach.
The walk took us about three and a half hours, but this included a fairly lengthy detour, a few photos and leisurely stop for lunch.  On the other hand, the old man was pretty restrained with his photography- we probably could have spent a lot more time   There was nothing too physically demanding about the walk, as long as you are comfortable walking across uneven and sloping terrain.  With tracks propagating, crossing over each other and finishing more than plot lines on Home and Away, it is helpful to know where you are going though.  While retracing your steps is always going to be pretty easy so you won’t get lost, I have to reiterate my recommendation that you bring a copy of the track notes we were following as a guide.