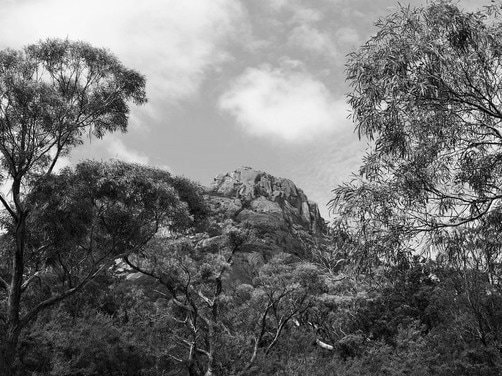 Mt Amos is a rocky peak that dominates the skyline from Coles Bay, so it really was overdue for me to get up and check it out.  I woke up on the Sunday feeling a little worse for wear from yesterday’s triathlon (and probably a bit more worse for wear from the post-triathlon celebration- I mean recovery).  But I thought a gentle bushwalk would be a great way to loosen out some tired legs.

As it turns out, Mt Amos is about as gentle and relaxing as the Liberal Party is competent and trustworthy.  It is not a gentle bushwalk and has some difficult sections that I would not recommend for anyone who has difficulties with balance or heights.  But if those things don’t put you off, it is a true gem of a walk- visually stunning and with a constant variation in the type of terrain and movement.

​I stopped at the visitor centre and bought pass, telling the staff member I would be heading up Mt Amos and receiving a stern warning that if it started raining, the track would be unsafe and that I should turn around.  As I claim to have the agility of a cat (on rollerskates maybe) I sometimes take warnings about slippery or dangerous terrain with the same equivocation Milo Yianoppoulis shows for age of consent laws.  I certainly didn’t let the blunt warning signs stop me climbing St Valentine’s Peak on a previous occasion.  But there was something about the tone of this warning that made me take heed of it.  After all, no one wants to be the idiot who ignores safety warnings and has be rescued by helicopter. 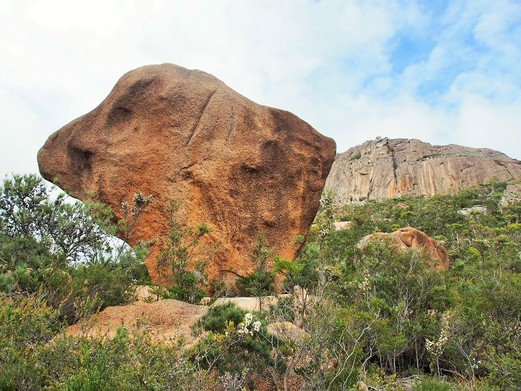 The Wineglass Bay carpark was packed with cars and even if the majority of visitors were heading to the lookout, (which is what I did this time last year) there would no doubt be others on the same track I was on.  With this in mind I made sure I took a side trip to the toilet before stepping onto the track (no one likes getting caught with their pants down- just ask the CIA).

After less than a kilometre, the path turned abruptly right and began to climb, gradually changing from a flat easy walk to something considerably harder.  The low shrubs and trees that lined the track became regularly interspersed with large rocks and outcroppings, as the intermediate period of winding track soon gave way to the really interesting part of the walk when it reached the base of the rocky incline that would get increasingly sheer as it got higher.
​
The rocky section was absolutely spectacular.  I emerged from the thinning treeline and suddenly found myself climbing a series of sloping reddish stone tiers. Oddly-shaped giant boulders seemed to erupt from the ground to tower over the lower vegetation (and walkers like me), while dry watercourses cut the stone in branching cracks beneath my feet and to my right a still waterfall of stone seemed to cascade down from the summit.  I marvelled at the physics of one of the boulders I passed that looked like a giant kite, perhaps four or five metres high, with only its narrowest section anchored in the ground (of course the cool thing about physics is that it works even if I don’t understand it- I just wish Donald Trump realised this).  ​ 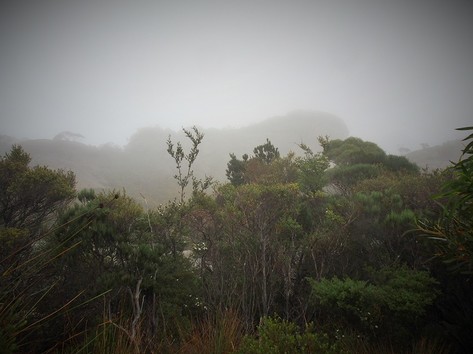 I followed a loosely-marked series of track markers as I got higher, until eventually coming to a steeply angled rockface.  I half-walked and half-scrambled basically straight up the slope, following cracks in the stone and grabbing anything that looked like it would hold my weight.  The red stone was darker here, often covered by a black moss that trapped any moisture and became as slippery as Nick Xenaphon’s promises (can anyone actually tell me if that guy has core principles?).

And I had to admit there was a bit of moisture gathering.  Much as I wanted to reach the summit, if it started raining, I had resolved to swallow my pride and reverse my course (an activity commonly referred to as, ‘Turnbulling’).  It wasn’t quite raining, but there was a dampness in the air and the rocks were indeed getting slippery, so I kept half an eye on the cloudy skies anxiously as I continued on.
​
I carefully clambered to the top of the steepest section and found the ground had flattened out almost entirely to become a small raised plateau.  I could kind of see the summit through a low misty cloud that drifted across the mountain.  There was a very otherworldy feel to the place and I half-expected to see a soulless dementor (I don’t mean Tony Abbott or Peter Dutton, although the description fits them perfectly- I was referring to the creatures from J.K. Rowling’s novels) materialising out of the mist.  I mentally rehearsed the words ‘Expecto patronus’ and kept my eye out for any wand-shaped sticks, but fortunately this was an unnecessary precaution. 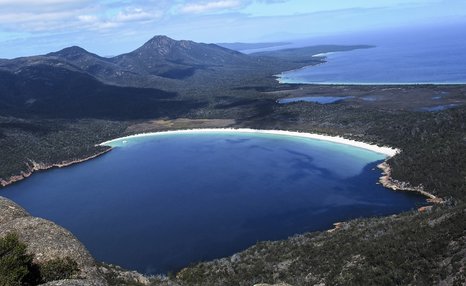 The track continued for another ten minutes or so, pushing initially through a thick muddy section of low scrub, then diverting over another stone section and ending with a final scramble up another angled rock face, coming to a halt at a lookout that overlooked Wineglass Bay and the mountains beyond.  It is a truly spectacular outlook, or at least it would have been if I wasn’t looking at it through a gauzy cloud.  Luckily, my dad has done this walk on a clear day so I can show you what the view should look like.
​
I waited around for a little while but the cloud didn’t look to be moving anytime soon, so after having something to eat I decided, not unlike the Scottish National Party, it was time to leave.

The rocks had gotten wetter and slipperier in the misty drizzle and I got an early warning when my foot slipped from under me on a flat rock and I was lucky to catch myself by grabbing a nearby branch.  In little time I had crossed the flat plateau and was approaching the steep, open rocky section that I was a little worried about. 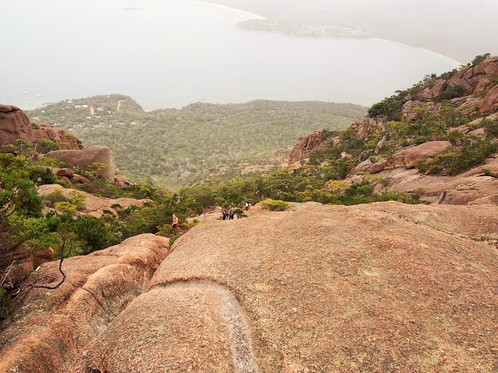 It was certainly an incredible view back down the mountain.  At this distance, Coles Bay seemed as small and insignificant as Andrew Bolt, while the path I would be descending dropped alarmingly down in front of me.  I was surprised (but not disappointed) by the lack of safety rails as accidents seemed a very real possibility.  The only descent I can think of steeper that this was the spectacular walk coming down Reed’s Peak above Lake Rhona.

Grabbing handholds with both hands, I made my way down the slippery rockface as cautiously and deliberately as Mike Flynn trying to negotiate immunity from prosecution with the FBI (and interestingly a whole lot more cautiously than Mike Flynn in his improper dealings with the Russian government).  It was a tricky descent and at times the only way to get anywhere safely was to inch forward on my backside.

​The lower I got on the open rock slope, the more I emerged from the peaks on either side and the more the scenery below expanded like the political entitlements scandal of 2016.  About half way down this section I encountered a few people coming up and we manoeuvred around each other as awkwardly as the UK government trying to negotiate post-Brexit arrangements. 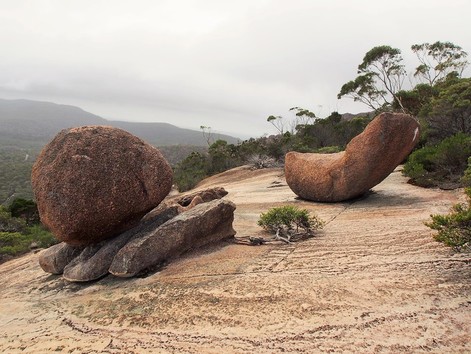 My fears of slipping and injuring myself proved unfounded as I managed to get to the bottom of this section without incident- only to immediately slip once I was onto flatter, ‘safer’ ground.  The fall did little damage aside from a few scratches so I continued on, once again marvelling at the surreal stone landscape now that I didn’t have to spend all my concentration on my balance.
Even allowing time to take numerous photos, I found myself back amongst the trees and soon on the flat section of track leading away from the mountain and back to the carpark.  I had meant to use my GPS to get an accurate time and distance for the walk, but I kept stopping the watch to take photos and forgetting to start it again when I resumed walking.  “Well now I know how that forgetful Michaelia Cash feels”, I thought to myself, (although arguably forgetting to use your GPS is easier to do than forgetting to declare million dollar properties or to research statistics of throwaway lines one plans on making in submissions, let alone forgetting it is her job to as minister for employment to actually do something about unemployment and underemployment for the people that elected her).

​But I estimated the walk had taken me close to 90 minutes of walking time and another half of that just taking in the spectacular scenery.  I would thoroughly recommend this walk to those that haven’t done it, but would also agree with the Information Centre’s strong admonishment not to attempt it in the rain. 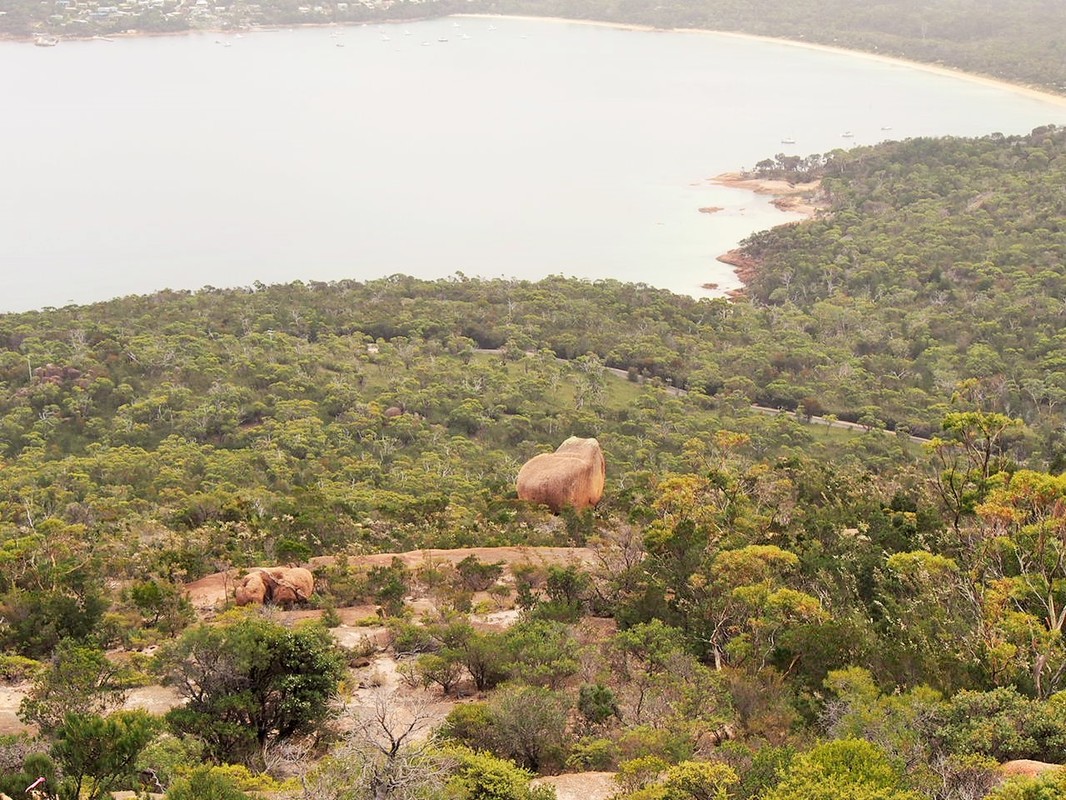