So there seem to be two accepted sporting truths in relation to the Gold Coast.  The first is that it is where sporting franchises go to die (and a special hello to one of the six remaining Gold Coast Suns supporters if you happen to be reading this) and the second is that it is the setting for a very fast marathon.

I had that second idea in my head as I made my way through the enormous race precinct in Southport towards the start line.  Ordinarily I am pretty confident I know roughly what I am capable of and make a race plan with this in mind.  However the first half of this year had been pretty disruptive for a number of reasons and I really didn’t have a feel for how well I was running.  As a result I had about as much plan for this race as the Tasmanian Government has to tackle the housing affordability crisis.

“I’ll just run based on my body is feeling,” I had said leading up to the race (and if anyone ever hears me repeat that sentence before another race, please slap me).
​
I’d had some niggles and plenty of nerves leading right up to race day, but when I woke early on the morning of the race, I felt oddly confident.  I was methodical and careful getting dressed and ready.  I never used to worry too much about this, but Melania Trump’s ‘I don’t care’ jacket reminded me that there is a risk in not thinking about what you wear.

As the seconds ticked down to the starter’s gun I felt the excitement surging inside me.  The weather was warm. But not hot and I was probably running on the flattest course I would ever see.  I suspected I was in for a big PB. 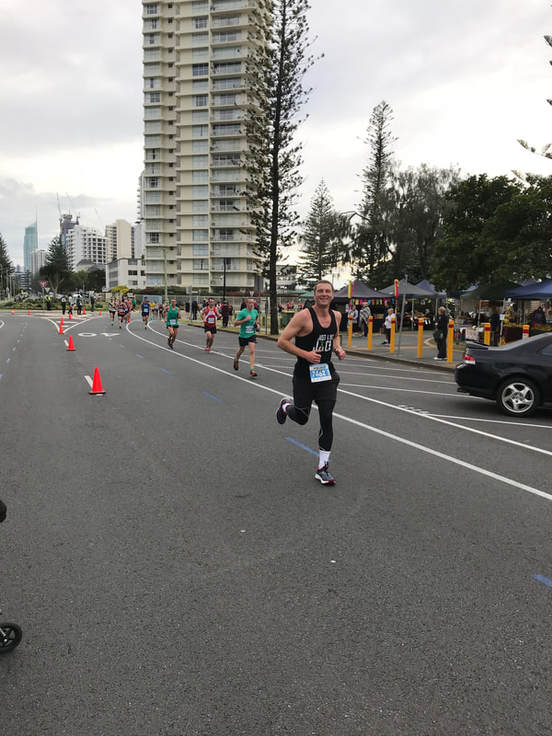 The race began and the runners around me took off at a pretty quick pace.  I felt myself carried along by the tide of people as we crossed the Sundale Bridge and turned to the south.  Being knocked over early in the race would have been awful so I kept my eye out for Andrew Laming, but it turns out he only pushes 12-year-old kids out of the way in races (which is entirely consistent with his party's policy of targeting those most vulnerable) so I was okay.

​Early in the race, the course was fairly quiet, with few spectators along the route.  In little time we were running through Surfers’ Paradise where we drew a few cheers of support from groups of people eating outside the restaurants.

I had barely checked my watch, but I looked down at the five kilometre mark and was quicker than I expected to be.  I realised this could go one of two ways, but I still felt really good so I didn’t slow.  The still morning air was a little muggy and I was conscious of hydration so I stopped and took on plenty of fluid at every drink stop.

After about eight kilometres I ran through Broadbeach.  Compared to the earlier scarcity of spectators, this area was humming with people.  It was a special thrill to run past my wife and daughter who were waiting for me, along with our friends, The Bike Whisperer and Race Mum.

After the green parkland of Broadbeach, the scenery narrowed as we followed suburban streets continuing to run south.  I was still feeling great as I passed the 10 kilometre mark, but was so far above my normal race pace that I decided I had to slow down a tiny bit anyway.  I knew I was still running much faster than I had planned, but it felt okay and I really believed I wasn’t going to suffer for it later.

Of all the white lies we tell, telling ourselves that our present actions won’t hurt us too much in the future is one of the most common and easy to fall for (Liberal voters do it every election) and this time was no exception.  I chomped on an energy bar optimistically and started chatting to another runner as we continued to make our way south.  We turned at Burleigh Heads and began making our way back.  The spectators lining the route seemed to have multiplied on the way back and now I was getting more encouragement and cheering than the Liberal Party gets from the Murdoch press.  I hit the half marathon point and realised that, even allowing for a slight decrease in speed towards the end, I was still on track for an amazing PB. ​
The first signs of fatigue began seeping in shortly after, but I wasn’t too worried about them.  Running a marathon isn’t meant to be easy so I expected to have to work for it in the second half of the run.  We ran back through Broadbeach and, as well as seeing my family once more, I also got a roar of encouragement from Jack Duffy and some cheers from the Just Like Jack team.

I was definitely working harder as my way back through Surfers’ and I looked longingly at the ocean to my right, but pushed on.  In my head I had started a series of calculations of what time I was looking at, based on how much time I lost in the last quarter of the run.  Even my worst case predictions were pretty encouraging, but I knew getting there wasn’t going to be fun. 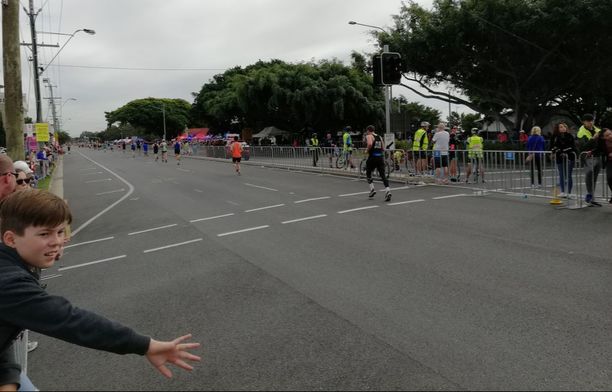 We crossed the main bridge at Southport again and faced the only real climb of the race.  It wasn’t steep but it did drag on a bit and I dropped a lot of pace on the way up.  We ran back past the race precinct and began the final 10km loop to the north.

I’d been working pretty hard for a while now and assumed things would just gradually get a little harder every few kilometres until the end.  But that wasn’t what happened.  From around 32km, I lost power rapidly, and just could not retain my speed.  I fought pretty hard and tried to find another gear, but just couldn’t find a way.  With my speed nosediving like the value of bitcoins, I had to face the sickening realisation that not only was I not going to stay around my target pace, but I wasn’t going to go close.  Despite feeling like I had nailed the early part of the race, I had done the opposite

This realisation came with a mix of emotions: anger at myself, frustration at a wasted effort; and despair that I still had such a long way to go.  They make a pretty bitter cocktail of feelings (just ask Mark Latham) and right then and there I wanted to be anywhere but out on course.  I have never wanted to give up in a race like I did at this point.  I've written in the past that sometimes you have to give up and there is no shame in that either.  In fact sometimes quitting is the only right thing to do (I'm talking to you, Bishop Phillip Wilson), but today wasn't one of those days.  I didn't need to give in.  I just really wanted to.  Hell, I'd have shared an uber with Karl Stefanovic if it got me to the end.

As a steady stream of runners began to overtake me, I struggled grimly on.  Much as I wanted to, I would not give up.  Being a new dad, my little girl is never far from my thoughts and it is really important to me that I provide the best examples to her of courage and resilience that I can.  I never want to have to tell her about a time I gave up because something was difficult.  I clung to this thought like Malcolm Turnbull clinging to his leadership.  I turned with about five kilometres to go, but even the feeling of running for the finish line didn’t give me much of a boost.  I was now running over a minute per kilometre slower than I had for much of the race.   ​ 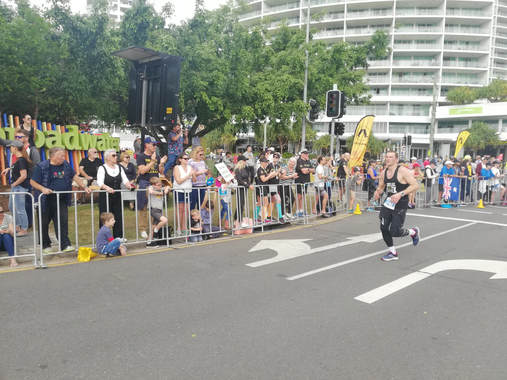 The last few kilometres were admittedly pretty spectacular, but they were damn hard work.  The water to my left sparkled peacefully, in stark contrast to how I was feeling.  I wasn’t the only person suffering either.  There were a number of people receiving medical support on the edge of the course and I should take this opportunity to thank all the volunteers, especially the first aiders who support this activity.  It would be a long day, but they are so important.  The final approach to the finishers’ chute was packed with supporters, cheering us on.  I was feeling pretty down on myself for misjudging the race so badly, but I couldn’t help but be a little uplifted when I turned into the chute and saw my wife and daughter waiting.

I crossed the finish line with mixed feelings.  I was disappointed at my loss of strength late in the race and my finish time, but just running the last ten kilometres without walking or giving up felt like something I could be proud of in the circumstances.  The race precinct was a lovely setting to hang around afterwards, watching people finish and recovering my strength so we stayed for a while.  My friend Ben, who I had run most of Gone Nuts with earlier this year, appeared out of the mass of people and it was great to catch up with him too.

​While obviously not my desired result, I came to terms with my disappointment pretty quickly.  I threw myself back into training with the aid and encouragement of my very supportive family and running friends.  With Sydney Marathon not too far away, I won’t have to wait for too long for another crack.  As for the Gold Coast Marathon, I’ll just have to come back another year to see if I can get that right, too (not an unpleasant consequence).