This is a common cycle route around Hobart.  Most of the route is scenic and has less traffic than a Green Lantern fan forum, while the side of the mountain provides a fair amount of protection from sun and wind.
After finding more forms of procrastination than a uni student with a new computer game, I finally set off in the mid-afternoon sunshine.  I cruised up Beach Road as my legs began to warm up.  There are few lights or roundabouts on this route, so for most part you don’t have to stop, but in the couple of kilometres after leaving my house, I managed to find more delays than the NBN rollout. 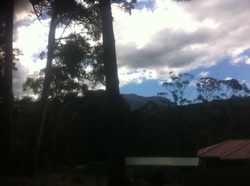 I rode up past Channel Court and had to be alert as I passed the war memorial, as one driver gave as much indication of his change in direction as Malcolm Turnbull before deposing Tony Abbott.  After the roundabout at the top of the hill, I rode through the slightly narcotic miasma that surrounds a KFC store for about 50m.  At that distance it smells very appealing, but I know that once you get closer it concentrates and smells pretty sickly, so it hardly took Nelson Mandella’s willpower to keep going.
I followed Summerleas Road down and then back up to where it crossed the Huon Highway (after again waiting forever for the car in front to go through the intersection).  Immediately afterwards the road became quieter.  It had been a long time since I had ridden this way before, which I demonstrated by immediately taking the wrong turn.  Luckily I realised I was in the wrong place quicker than a Russian fighter jet in Turkish airspace and took a quick U-turn, realising the correct turn was just a little further on.  “Nothing wrong with going early,” I muttered to myself, hoping I never had reason to say that again.  50m down the road, I turned left at Leslie Road, wondering why it was so hard to remember which road I had to take to get to Leslievale.
Leslie Road slopes gently upwards and winds its way left and right with Mt Wellington looming far in the distance like a friendly version of Mt Doom.  After a few hundred metres, it turns back under the Huon Highway.  The bumpy asphalt was replaced by a dry gravelly dirt road that made concentrating on my balance (a concept alien to Andrew Bolt) more important than usual.  The loose surface on its own was not too bad but the road also cambered quite steeply down from the centre which was a little challenging, but nothing to be too worried about.  I hadn’t done a lot of riding this year due to injury (and having the courage in bad weather of a masked Reclaim Australia marcher) so perhaps I was being overly cautious.
The road continued to parallel the highway for another another kilometre or two.  It was a little disconcerting as I would hear the sounds of cars coming along the highway and kept looking over my shoulder like Mal Brough waiting for the AFP to catch up with him.  Eventually the road bent back to cross the highway for the third time, reverting to a sealed surface at the same time.  One of my criteria for knowing I am officially beyond the metropolitan suburbs is when I start seeing farm animals, so I’m always a little blown out by seeing people riding horses along this part of the road.
Any lingering thoughts of KFC were quickly forgotten as I passed the Bush Bakery, near where Leslie road meets Huon road.  The treasure trove of baked goods within is a better kept secret than the abuses in offshore detention centres, and luckily I can’t be threatened with vastly disproportionate penalties for sharing it.
Soon after the bakery, I turned almost 180 degrees onto Huon Road and began the climb towards Neika.  I always assume it is further than I think from here, forgetting that I have already climbed a lot of the way.  Even uphill, it’s quite a nice part of the ride, with fields sprawling away below me on the right a steep hill rising on my left. 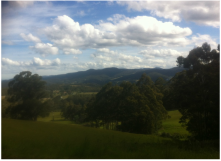 I pass a sign advertising land for sale.  The optimistic claim that it is 15 minutes from Hobart must have been written by someone with a good sense of humour or a helicopter.  The road continues to rise in what I assume is a northerly direction, with the occasional sharp bend left or right before straightening back on a similar course (a bit like conversation with a crossfit enthusiast).
A few kilometres of climbing and I am suddenly struck by the feeling that I am no longer approaching a distant mountain but have actually reached its base.  I keep climbing, shaded by the tall trees that grow on either side of the road.  I had maybe seen five or six cars since leaving Summerleas Road many kilometres ago and maybe a few more bikes (and don’t forget the horse) but other than that I’d had the road to myself.  The last part of the climb to Neika is slightly steeper and still conscious of not overdoing anything I took it pretty slow. 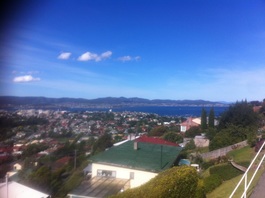 The moment I reached the top of the hill the road quickly dips downhill and I enjoyed a pleasant 4km stretch cruising into Ferntree.  This part of the ride is about as easy as being paid half a million dollars a year to be a Wind Farm Commissioner, although it always seems a little longer than I am expecting, but I don’t begrudge it due to the nature of the route.
After passing the Pinnacle Road turnoff, the road begins to get steeper downhill and I was quickly racing towards Hobart (well my version of racing anyway- which has a top speed similar to the government's top speed on progressive social policies).  Part of the descent is an exhilarating long straight with blurred trees rushing by on either side.   The hills of West Hobart and South Hobart begin to come into view on the left as I get lower, before I turn right again and the distant blue waters of Sullivan’s Cove are suddenly visible with central Hobart embracing it like the COALition's protective embrace of the fossil fuel industry.
Huon Road becomes Davey Street somewhere along the line, before I turn right into the very steep Linton Avenue.  I want to hit the brakes more than Corey Bernardi faced with a progressive policy, but I know this would actually destabilise me so instead I grit my teeth and commit to the descent, breathing a minor sigh of relief when I get to the bottom. 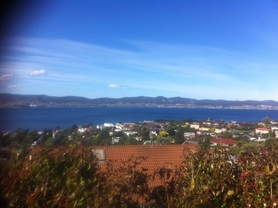 Over the next hill and the massive UTAS complex is pretty much everywhere.  Now depending on your point of view, UTAS is either Tasmania’s cutting edge of innovation and learning, or its capital of pretentiousness and posing.  I’m not quite sure where the truth lies, but I am convinced by its economic importance to the state, noting it continues to be rated very highly against other universities around the world.  It also employs several of my friends including Almost-Doctor Tom and Not-Any-Kind-Of-Doctor Jim.
The road dips and rises in small undulations after the uni, before a bigger climb after Waimea Heights Primary.  Aside from the reduced speed it is actually not too bad.  The hill to my right is covered with interesting architecture dotted amongst the green of the trees.
The top of the hill provides an elevated position (obviously) with a lovely view of Sandy Bay and the Derwent.  The road itself is punctuated with some amazing houses that even Bronwyn Bishop might think are a bit over the top.  It would be nice to own a house like that I think to myself, but unless I rob a dragon named Smaug, I don’t think that is very likely.
From this high point Churchill Avenue begins to drop back down towards Sandy Bay Road, passing the old cannon at Alexandra Battery.  I have described Sandy Bay Road from Hobart to Kingston in full detail here, so I won’t repeat that except to note this time I was probably a fair bit slower than normal.  The whole ride took me a bit more than two hours, but that was a pretty relaxed pace.  You could definitely do it in under two if you wanted to.