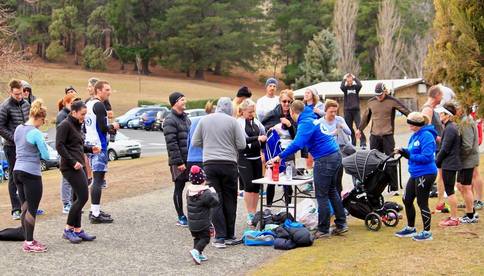 Solemate Handicap 29 saw the event return to its original home of Risdon Brook Dam.  Personally I had never run this course, but I had been warned it was a bit hillier than the flat course I had run previously at the Montrose Foreshore.

Being a handicap race everyone has to wait for a different amount of time before they can start.  Unless you are one of the very first runners, this gives you an idea of what it feels like to be on a footy team end of season players' trip, in that you spend most of the time chasing arses.  I had hoped that the harder course might have contributed to a smaller handicap for myself, especially on an unfamiliar track, but those hopes were quashed when handicaps were released a few days prior to the event and I found out my handicap had increased.  The handicapping system itself seemed to be raising as many questions as the Trump election campaign, but there was little evidence yet of Kremlin involvement.

​It was a bit fresh, but not prohibitively cold when I arrived at the dam.  Ryan, Will and Dalts were busy scanning timing tokens for everyone.  I did a decent warm up, as I was still feeling surprisingly tight through the calves after a bushwalk up Old Hobartians Track on Mt Wellington.  The combination of exercise and deep heat seemed to do the trick and I was feeling pretty good. 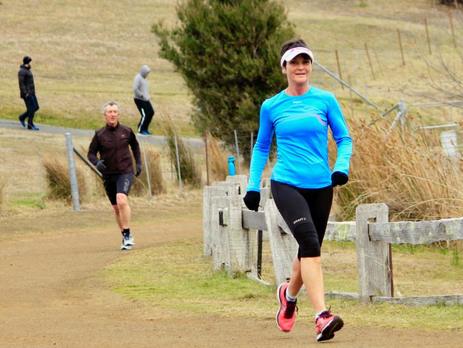 The first runners set off down the hill, while the rest of us made helpful offers to start a little earlier so as not to hold the event up.  These offers were rejected as unequivocally as progressive ideas at a National Party policy summit.

It wasn’t long (although a little longer than I would have liked) until my turn to start, so I shed clothing like a celebrity who sees a camera and did a final couple of stretches before, to paraphrase Gough Whitlam, it was time.

I set off pretty fast, adrenaline pushing me a little harder than I perhaps should have, but I was keen to steal a few seconds while I felt fresh and maybe make up a bit of ground on those ahead of me.  I sped down the hill and across the dam wall before hitting a tight uphill turn and following the waterside track that was mainly flat for the next kilometre or so.

The damp gravel path beneath my feet gave good traction with little impact, while the tall narrow trees on my left seemed to flash past like bigotry quicker than my senses could keep up with like bigotry in the Murdoch press (I wasn’t going that quick, but I tend to have a slightly unfocused gaze when I am running- I call it the Jonny Depp look and it is pretty much the only resemblance I bear to him).

​My watch beeped and told me I was going a little too fast.  I hate being told to slow down (at least it wasn’t my wife this time), but I tried to gradually drop back towards my target speed.  Unlike the government’s RET, I actually wanted to reach my target and hold it. 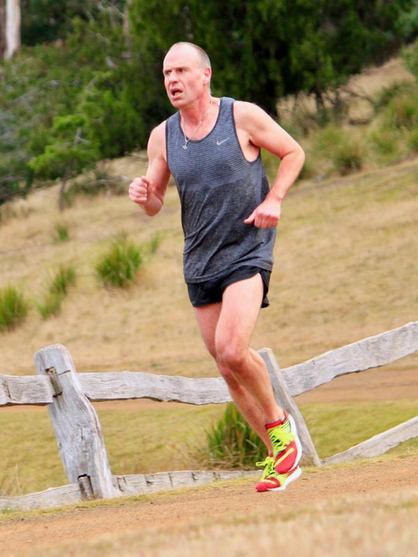 Marcus’s green shirt had been in my view from early in the run and I caught up to him as we turned at the far side of the dam.  Rounding the bend, we hit the first a number of short but steep hills along the northern shore.

I battled my way to the top and then coasted down the other side.  Dylan was running a short distance ahead of me and the way I fixated on his back was reminiscent of Kevin Rudd and Julia Gillard.  Unfortunately I was making slower progress reaching him than successive Australian governments have in addressing inequality for Indigenous Australians.

With little warning the track turned sharply left and into a steep rise which was followed by a dip, a bend and another climb, as the track carried out contortions that would make conservatives who support fracking proud before making its way back to rejoin the main part of the dam.  I felt okay going uphill, but noticed a momentary lack of power every time I hit the crest and tended to use the downhill more as a recovery than a chance to steal a few seconds.

From here, it was flat and easy and I could see all the way to the turn.  I also saw a number of runners coming back the other way.  It can sometimes be awkward passing a number of runners going both directions.  Most are pretty good about leaving room for others to pass, but some are less likely to give way than Venus Williams.

James and Shaun flew past me on their way back, while I was still half a kilometre from the turn.  At the speed they were going I figured I was more likely to catch autism from my next flu shot than catch those guys on the way back.  I got a high five from Matt moments later as he also passed me looking strong.

​The final bend in the track comes 100m from the turnaround.  I was huffing like the Big Bad Wolf by now and so focused on the end that I didn’t even notice the Solemates’ star photographer, Danny, who appeared to have called on his National Service training in camouflage to hide himself in a ditch beside the track. 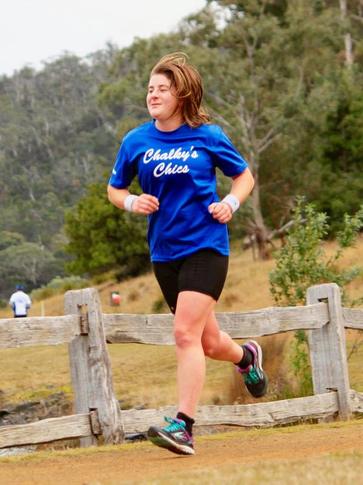 Ryan (who looked quite cheerful not to be running) gave me some encouragement as I turned and I finally began to make some ground on Dylan on the way back.  I managed to pass him in the hilly section, which I managed to grind my way through before turning at the far end of the dam and setting myself to hold a pace for the last couple of kilometres.

​I was sucking air like corporate tax cuts sucking money from the budget, but managed to keep going.  I passed Loren, who looked to be showing no ill-effects from being first girl home at parkrun the previous day, and saw Mick powering away in front of me.

Knowing how strong Mick is, I wasn’t surprised that he wasn’t slowing.  He dragged me along for much of the last kilometre, before I was finally able to catch him running back across the dam wall.  The final climb was little more than 100m and I struggled to the top of the hill and crossed the line with the same sort of relief I usually feel when a series of The Bachelor finishes and otherwise intelligent people stop talking about it.

Despite a few reasonable objections about some of the handicaps, we had almost all of our runners finishing quite close together and it wasn’t long before the coveted winner’s stubby holder was awarded to James (Mark and Del who finished first were ineligible as it was their first run and their handicap hadn't been refined), whose powerful run showed it continues to be a good time for athletes with the surname Horn.

Formalities out of the way, we moved up to the BBQ site, where Will had already got to work on breakfast.  There was plenty of friendly chat as we enjoyed our egg and bacon rolls, with chocolates provided by Mick as always.  Dalts announced that there were three more handicap events planned before the end of the year so plenty of opportunity for anyone who wants to come along and join in. 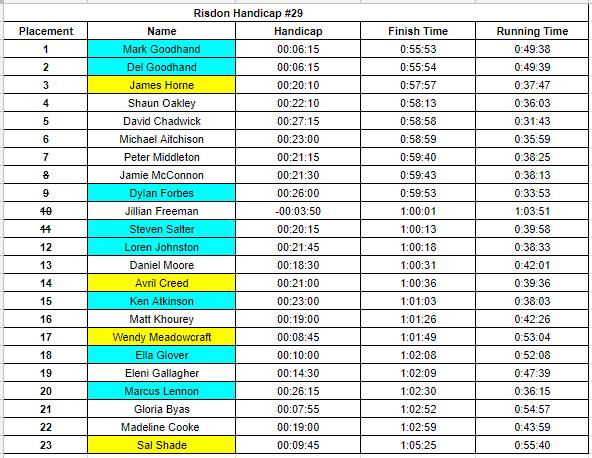