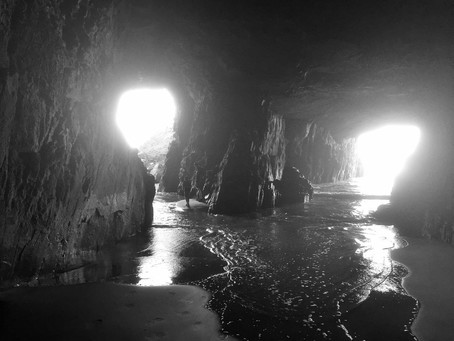 The Tasman Peninsula is such a beautiful part of the world.  We are blessed to have many wonderful places in Tasmania, but the peninsula is pretty hard to beat.  So when my mate, Ash, suggested a few of us spend weekend at Carnarvon Bay and do day walk to Mount Brown (not in the Hugh Grant way though) and Crescent Bay, I was as excited as Corey Bernardi gets about softening the Racial Discrimination Act.

We got down there Friday evening and I had planned to get up early and get a few kilometres of swimming in before breakfast.  However I ended up staying up later than I meant to so that plan was about as doomed as the Republican first effort to repeal the Affordable Care Act.  Instead, I got up late, had a cold hamburger and cheesecake for breakfast (mmm nutrition- remember that statement when I later mention that I am in training) and set off in the midmorning.

I had three companions for the walk, Big Nige, Ash (who is kind of like a little Nige) and Nige’s son Logan (who is definitely a little Nige).  The track to Mount Brown starts from just next to Remarkable Cave so we had to pop down for a quick look while we were there.  There was less water than the last time I was there, but before Malcolm Roberts and Josh Frydenberg get excited about disproving global warming I suggest they google the tide.
​
We jumped down to the sand and walked ten metres inside the cave, stopping about ten metres in where the tunnel bifurcated on its way out towards the sea.  The gentle waves were stopping just at our feet (except Logan who had run ahead with as much concern for consequences as a Donald Trump tweet- and now had wet shoes and socks) and the bright light from outside was a glaring contrast to the surrounding gloom. 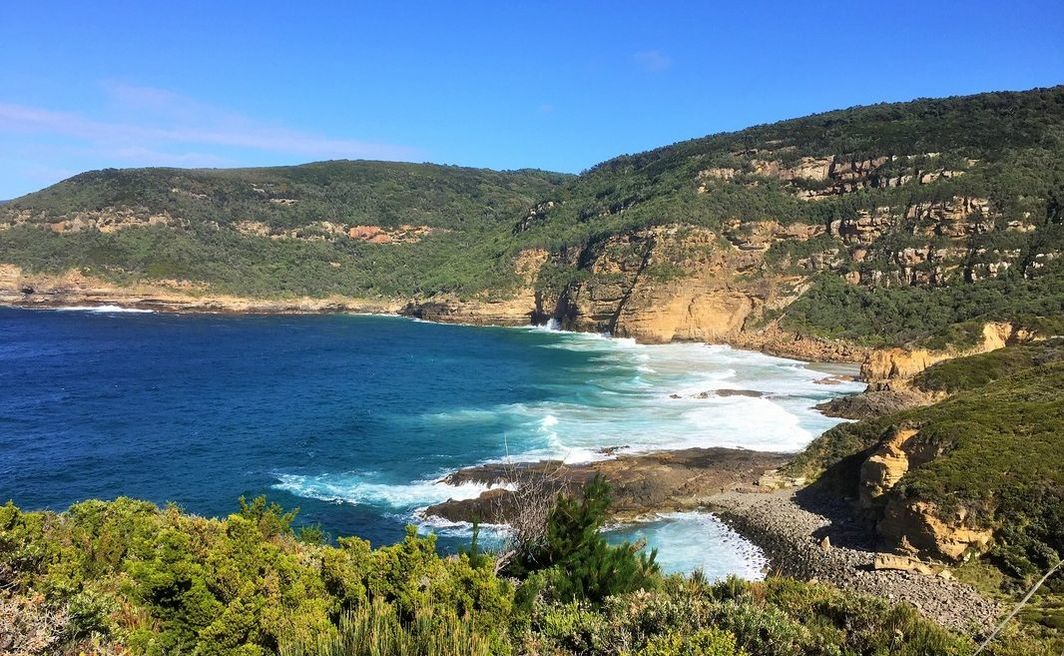 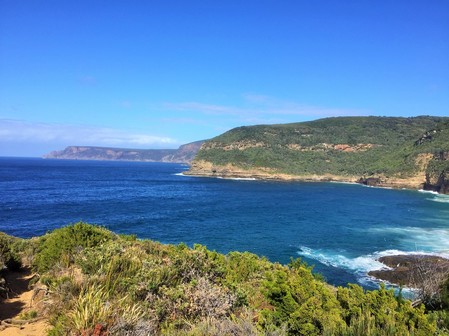 After a bit of a look around, we headed back out the way we came, climbed back up to the walkway and followed the series of steep steps and walkways back to the top.  The carpark itself was busy (I was advised by the government to wait a day because EVERYTHING is less busy on Sunday due to penalty rates), so we carefully crossed the road and found the start of the Crescent Bay Track.

The first part of the track was pretty awesome.  It was a narrow sandy path that wound between the low bushes and undulated with the rolling dunes.  The view to our right was incredible, with dark blue waters of the ocean and rolling swell striking the imposing sea cliffs that stretched from Remarkable Cave, all the way around to a distant Cape Raoul- which is another walk I highly recommend.

After about 15 minutes, the view to the right disappeared as we dropped down a slightly larger hill.  There was little wind so the air around us was quiet, except for the commentary and repeated inquiries of our progress from Logan, who seemed to be enjoying the walk as much as Mark Latham enjoys International Women’s Day.

Mount Brown had been visible for much of the walk, but it was only as we got closer that the gradient became more apparent.  The land began to rise again as we made our way towards its base so we could once again look back towards the coastline to our south, which was no less impressive from a little further away.  Some distance behind us were the small figures of an Elizabeth College school group strung out in an intermittently-spaced single file. 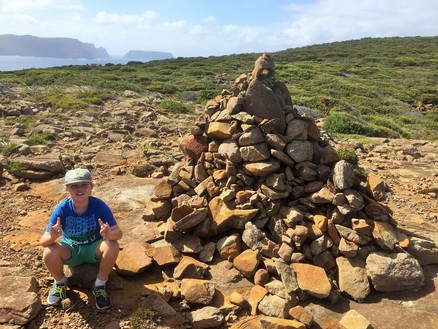 We reached the base of Mount Brown in a little under an hour, which was a pretty good effort from seven-year old Logan (and not a bad effort from Ash who is about the same height as Logan).  You can skip the climb entirely and continue on to the enticing golden sand of Crescent Bay, but we took a sharp right and began going straight up the rocky slope.

I had expected the track to zigzag a lot to flatten our climb up the hill, but it was surprisingly direct and you had to be a little careful of your footing on the rocky ground.  It was probably less than ten minutes, although I kept stopping to look around so took a bit longer.  There were a few false tops, where you thought you had got to the highest point only to be disappointed (much like national debt under the liberal government), but eventually the slope flattened out and stopped at an enormous stone cairn that Donald Trump would have described as ‘huge’ (or maybe ‘bigly’- his grammar is no better than his vocabulary).
​
The view from here was worth taking a bit of time to enjoy.  Below us were low rugged hills rising and falling all the way back towards the cove of Remarkable Cave and the imposing cliffs beyond.  To our left was the serene blue of the Tasman Sea extending out to the horizon, while to our right were the high dunes of Crescent Bay and beyond them the wider expanse of Safety Cove. 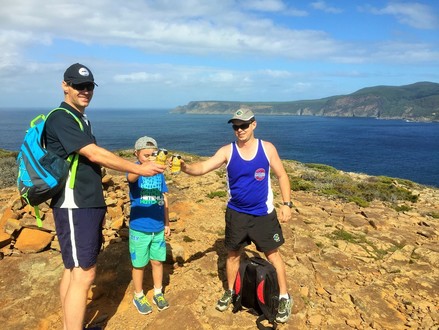 Ash and Nige were cracking their cans within seconds.  Obviously no Coopers though (not that we had joined the Coopers boycott, their beer just tastes awful).  I couldn’t join the boys as I was in training for the Coles Bay Half Ironman the following week (let’s not talk about the cheesecake for breakfast though), so I pulled out a few snacks and we allowed ourselves a few minutes to enjoy the scenery.  This wasn’t actually the highest point of the hill however, and my curiosity demanded I walk across the flat summit for another 500 metres or so, until I found the actual top which was marked with a metal trig point assembly.  This area was far less scenic, so after scouting forward to see what the coastline below looked like, it was time to head back.

The way back was a little confusing, as there were a number of false trails and the cairns seemed to be strewn around as randomly as after Bathurst.  I stopped before the steep part of the descent to take a last look around.  By now, the college group had bypassed the steep track and were visible as tiny figures crawling up the dunes of Crescent Bay. 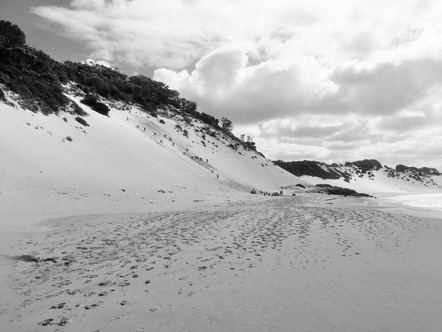 The trek back down Mt Brown is a little treacherous, (not quite Tony Abbott-level treacherous, but you still had to watch your step) so we carefully made our way to the bottom and then followed the easy track down to the beach.  Crescent Bay itself is spectacular, with towering white sand dunes overlooking a picturesque curved bay.  The Elizabeth College group were still having a great time running up and down one of the tallest dunes and I have to admit I was a little surprised how much they were all into it and how few people playing on smartphones (oops- did I just become Simon Sinek taking cheap shots at millennials?).
Logan wanted to try running up a dune, which meant poor Nige had to as well.  Ash and I watched from the bottom as (much like the NBN rollout) the run became a walk, which became a crawl.  Eventually the two of them got to the top and then back down and we sat in the sand and chatted while Logan went for a swim in the waves.

The walk back was a whole lot shorter, as all we had to do was walk over the headland to Safety Cove where we were meeting friends for lunch.  The first climb up the dune was a bit of hard work though.  It wasn’t just steep, but the consistency of the sand was very uneven.  Sometimes my foot would sink past the ankle and other times I would feel like stepping on stone.  I had to stop and take a few more shots from the top of the dune, then it was time to put my shoes on and follow the easy track the other side.

​The track quickly connected up to a dirt road which curved down towards Safety Cove.  In little time, we were back on the sand (and I was in the water again) and we were joined by half a dozen friends for a picnic in the sunshine.
Like I said, the Tasman Peninsula is just a great place. 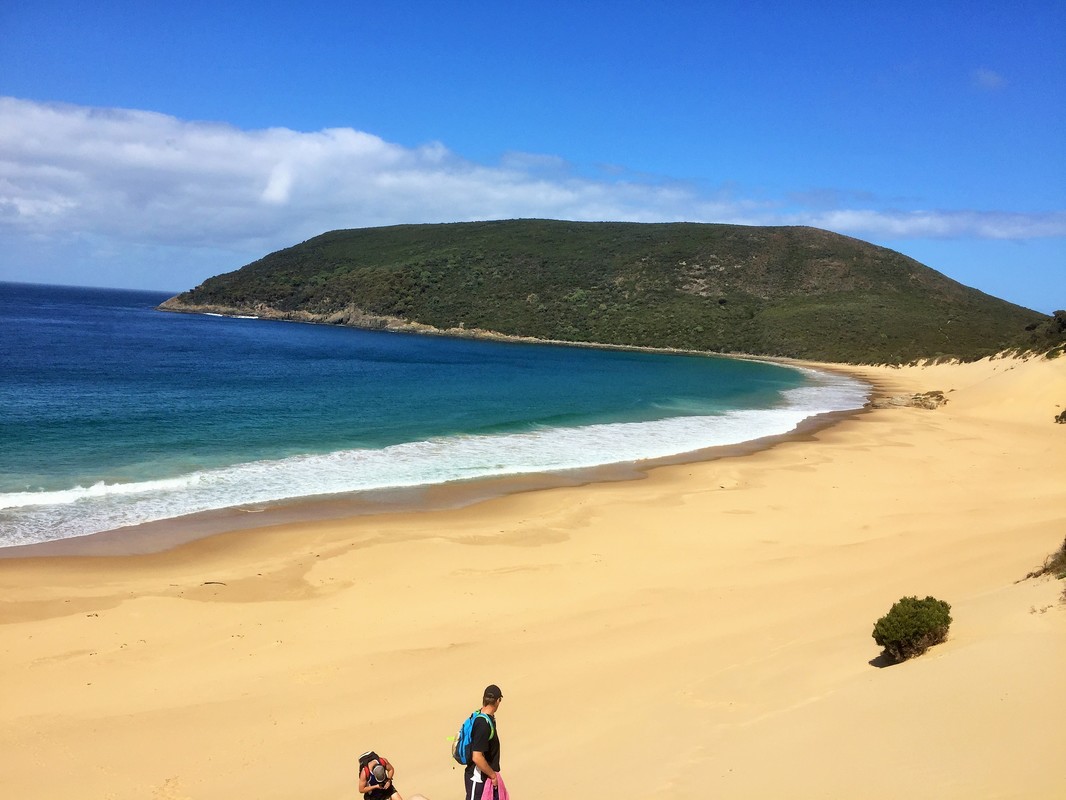