With a solid walk ahead of us, it wouldn’t have been right to start without the right breakfast, so my dad cooked up steaks and enough chips to make a crossfit cultist cry.  Once the food baby was safely secured to my waist, we jumped into the car and headed out of town.

One of the great things about bushwalking, especially in Tasmania is that there are good walks to do all year round, pretty much regardless of the weather.  So when Dad and I managed to coordinate a day free, it was a no brainer that we would go for a hike.  The tougher decision was where?  We settled on Mt Field East, as I hadn’t been in the snow for a while and was itching to belt out the Frozen soundtrack as we walked.  At 9:00 on a Tuesday morning the roads were less crowded than an East 17 concert, so in less than 90 minutes we were pulling into a small car park near Lake Fenton.  It was a different world out here.  The sky was blue and the sun was out but everything was covered in snow and for once there was barely a breath of wind.

The track began by winding away from the road through some quite dense bush.  There was no way to stay dry as the branches we were pushing past were covered in snow.  It wasn’t long before the track began to arc to the right and came back to cross the road we had begun by heading away from.  Luckily for us, this did not come as a surprise as someone had helpfully put up a great big sign warning us that there was a road ahead.  Considering the size of the road, this was about as useful as when the air hostess tells you where the exits are on a plane.

We crossed the obvious road and walked down past the shore of Lake Fenton.  The lake itself was beautiful sight.  There were steep white-tipped mountains on either side and a thin layer of ice clinging to the edge of the lake.  Although the sky was clear, dusty specks of snow drifted down from the trees like the last flakes to settle in snow globe.

After some quality time for the old man and his camera, we followed the path up the steep side of the hill.  Our progress up the winding path was slow as we were following a minor watercourse formed by melting snow.  As I like getting my feet wet about as much as Ariana Grande likes America, I hopped slowly and awkwardly between the patches of solid footing, moving like Jonny Depp in the Pirates of the Caribbean movies. 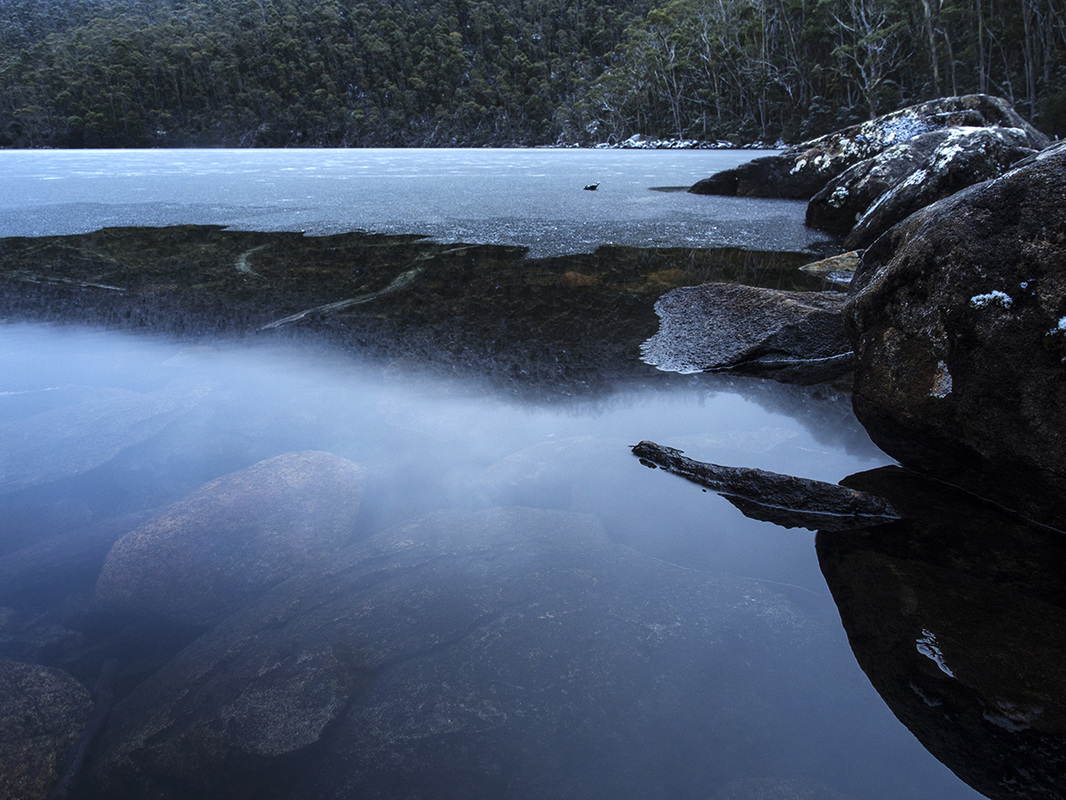 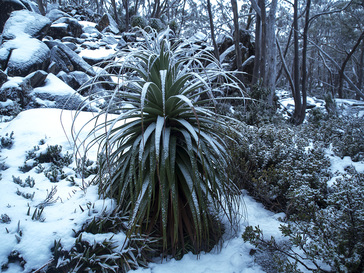 About 30 minutes in, we came to fork and, following Dad’s advice, took the right hand path which led to a detour to Seager’s lookout.  He thought it was another 5-10 minutes, but this wasn’t the first time his judgement of time were to be as optimistic as government forward estimates.  In the end, it turned out to be closer to 15 minutes each way but, certainly worth it.  We quickly crested the first rise and found ourselves in a flat saddle between two taller hills.  Snow had settled thickly up here so it was whiter than the cast of the Lord of the Rings (dark-skinned CGI orcs don’t count).  Large icy boulders stuck out at odd angles, while hardy gum trees still somehow grew beneath the layers of snow.  The flat section of ground was dominated by an enormous pandani that looked like an 8-foot tall pineapple, covered in snow.  I don’t know a lot about how those things grow in this climate, but here it looked as out of place as the words Shane Woewodin, Brownlow Medallist used together.

The path curved further to the right and headed for Seager’s lookout.  A wispy cloud, thinner than Robert Mugabe’s veneer of legitimacy, had settled around the top, so there was more grey than in an awful E.L. James book.  The top of the lookout involved climbing up through some rocky sections.  In dry conditions it would have been easy, but it wasn’t dry.  Being covered in ice, the rocks were both cold and slippery.  I chose to keep my gloves off for the slightly increased grip I thought it afforded me.  This may have been correct but when the rocks are as cold as I imagine Peter Dutton’s reptilian blood to be, you can barely hold them for longer than Julia Gillard keeps promises, meanwhile footholds were about as reliable as Shane Watson’s batting, so I didn’t want to rely on them for long either.

With a bit of effort and equal amounts of good luck I got to the top of the last little scramble.  On a clear day it would have been magnificent, but the thin layer of cloud reduce my vision of the lands far below me.  I could just tell it was there but couldn’t make out details clearly  I wondered if this is how Joe Hockey feels when he looks down on ordinary people who are less privileged than himself.

When I heard Dad climbing up behind me, I turned to see how it was going.  Now the old man is 65 and I certainly wouldn’t recommend this walk for many people his age.  You might think it is a little irresponsible me to have taken him on the walk, but he is actually the expert on walking in Tasmania, so it is more him taking me.  I don’t normally have any worries about Dad, but when he lost his grip climbing up the last stage to the lookout and fell backwards, I worried that I may have made a Bill Shorten scale oversight. Fortunately he survived the fall rather unscathed, got back up and climbed up to join me, this time accepting a hand up on the way. 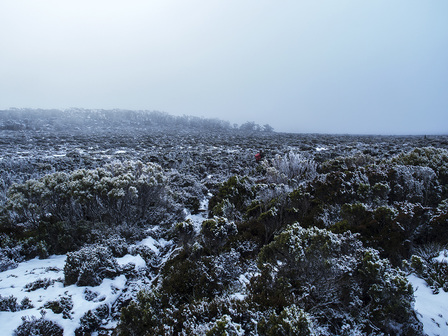 The moor was quite a sight.  A great frozen plain with nothing apart from low scrubby bushes and thick grass patches growing amongst the snow-covered rocks.  Several hundred metres away, we could see where the land rose again and larger trees were able to grow without being swamped by the ever-present snowmelt.

Behind the nearest rise and further to the right, the summit of Mt Field East rose hidden in the clouds.  As we made our way across the moor it began to loom out of the obscuring mist like a physical manifestation of the oncoming spectre of climate change (except Tony Abott says that doesn’t exist so I don’t need to worry about that anymore), but the rocky edifice only became properly visible, once we were close.  It was impossible to keep your feet fully dry crossing the moor (unless you came properly equipped, I suppose, but who does that?)  Large sections were flooded and covered in a layer of ice weaker than a Shaun Higgins tackle.

The terrain lifted out of the moor and reverted to the combination of scattered trees and rocks we had been become accustomed to before reaching the Windy Moor.

We paused before the final ascent, noting we had been travelling for two hours by now.  We were only a few hundred metres from the summit, but also had another 50 vertical metres to climb.  Accordingly, I had expected a pretty circuitous route, but the cairns ran pretty much straight up the rocky slope.  Following the line of cairns, we scrambled our way up, keeping lower than ACA’s standards of ethics and using our hands for balance.

After about 15 minutes of careful progress, we reached the summit, which was marked by an impressive curving rock shelter that one could hide from the wind in.  Despite the cloud that hovered over the summit, preventing full view of the surrounding countryside there was an isolated beauty to the ghostly panorama we were part of.  Dad marked the location in his GPS and took a few photos.  He is the organised one who carries the crucial equipment and knows all the routes.  On my own, I’d have been as out of my depth as Alexis Tsipras in a first year Economics exam.
The frozen surface of Lake Nichols was visible from above and we made our way closer and closer, until we eventually arrived at its shore.  From a distance, the ice had looked thick and I had wondered idly if it might hold my weight.  On reaching the shore, it became apparent the ice was about as firm as Will Hodgeman’s principles, so I could break it with a finger. 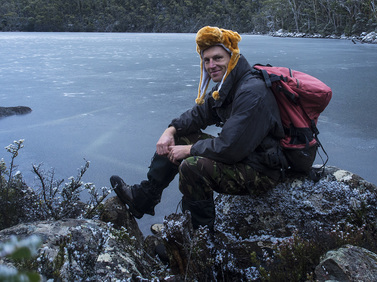 By the side of the lake, was a nicely constructed little hut that appeared in good repair.  I was too busy wondering around the lake and looking at the scenery to look inside but it looked like it would have been quite comfortable if we were caught there in bad weather.

We left Lake Nichols and set off over another little hill before contouring the southern side of another one for half an hour or so.  Finally, we reached Lake Fenton trail, which paralleled the road back towards the car.  From here it was easy walking as the trail was flat and wide.  We came out about a kilometre down the road from carpark, directly below the steeper side of Seager’s lookout.  The view looking upwards towards what seemed an almost vertical rocky slope was a final impressive memory to take with us as the road turned away from the hill.  After a final lazy ten minutes of walking, we found ourselves back at the car.  The walk had taken almost five hours exactly, but had been slowed for photos, meal stops and due to having to use caution on slippery surfaces.