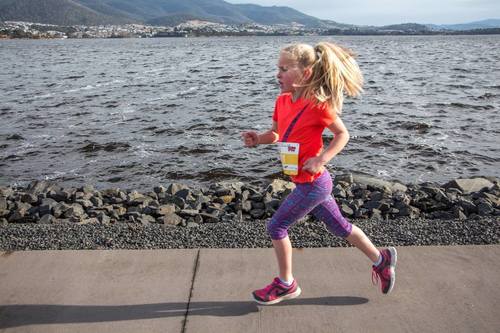 “Are you going to the G10?” a number of my friends have been asking in recent weeks.  I was a little surprised as none of them were particularly politically active sorts.  It was only after the fourth time that I had patronisingly told them, “They expanded to the G20 years ago,”  that someone bothered to tell me they were inviting me to participate in a fun run, not protest a global financial summit.

So, feeling as silly as a One Nation voter who thought Pauline Hanson would oppose legislation that targets low income voters, I put away my flares and my gas mask and started hunting around for my running gear.  The day of the race came and I was a little nervous as always.  A lot can go wrong on race day.  You can have problems with nutrition, roll and ankle or discover you have dual citizenship (or is that just a problem our politicians ignore?), but today was one of those days when things seemed to go pretty smoothly.

We rolled up to the DEC early and I did a few kilometres to warm up.  It wasn’t exactly balmy, with a chilling breeze coming in off the river, but it wasn’t too bad either, with a mostly clear sky and little sign of rain.  By the time I finished my warm up a number of my friends had arrived so I spent the best part of 20 minutes enjoying some considerably more humane and decent conversations than the recently leaked one between Turnbull and Trump.  ​

​The children’s 2km race set off first in a happy horde of colour and excitement, with the 5 and 10km runners gathering to start together shortly after.  I was hoping to run pretty fast, so I snuck pretty close to the front, and found myself only two rows back from the start line. 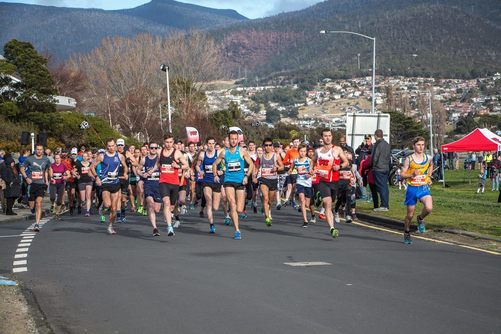 ​After a short downhill section at the end of Loyd’s Road, we turned around and headed back.  This allowed for a good opportunity to get a wave and a word of encouragements from friends going the other way.  Despite the fact that I was already as uncomfortable as Gladys Berejiklian confronted by homeless people (the ones she hasn’t had moved on), I worked pretty hard up the hill and was soon back on the flat, taking the sweeping bend back until I was heading back towards the DEC.

The course changed direction more often than John McCain on healthcare, so I was quickly into another sharp right hand turn that took me out around the point and connected with the foreshore running track.  The wind had whipped the Derwent into angry waves that struck the foreshore with a bit of force and I was splashed intermittently by the grey water (but thankfully not greywater) as I made my way past the spectators near the start line.

The track gradually turned further and further into the powerful wind until we were running into a full headwind along the boardwalk bridges that parallel the Brooker Highway.  Despite my best efforts, I could feel my pace drop under the withering assault of the wind, but I comforted myself that being heavier than most runners meant I probably suffered less in the wind than most.

At the end of the final bridge, we took another 180 turn and followed the edge of the road back towards the DEC.  I had expected to feel a bit of wind assistance on my back, but away from the water it was actually harder to notice than the cotton farmers siphoning water from the Murray-Darling Basin.  In less than a kilometre, I was back on the road and approaching the start line for my second lap. 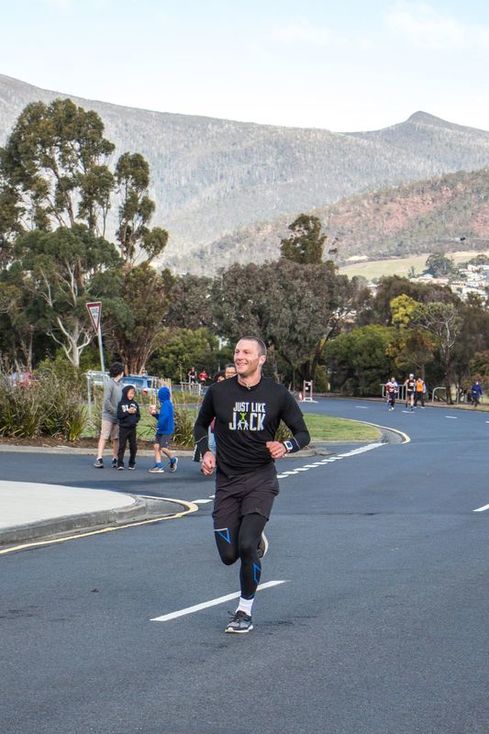 When I had passed the start line earlier, I forgot the golden rule of fun runs- save a bit extra for the spectators.  In truth, I almost always forget this rule, hence in most photos of me running, I have the facial expression of someone undergoing a painfully invasive medical procedure or caught in a conversation with Barnaby Joyce.  Anyway, I remembered this time and was lucky that Maddie’s amazing camera work caught me looking normal and relaxed in a great photo.

I was pretty much running on my own at this point in the race and the stretch out an back along Loyd’s Road was quieter than the Labor Party on poker machine reform.  Although the lack of company can be a little dispiriting in a tough race, it did give me a chance to take stock of how I was going.

I had set myself a fairly tough goal time for this race that was well under my PB and at this point in the race I was coming to the conclusion that I might have overestimated.  I had managed to just hold my target pace for the first half, but was already feeling heavy and had little confidence I would be able to match that in the second lap.  I was pretty philosophical about my likely failure, reminding myself I have deliberately changed my approach to goal setting and now welcome the occasional failure as proof that I am challenging myself sufficiently.  As a result, I didn’t panic and try to chase the time, instead resolving to keep working as hard as I could without a blowout and hopefully manage a final surge when I got close to the end.

I turned off Loyd’s Road and headed for the point.  Dean Giblin, shouted out some encouragement and a bit of useful advice as I passed and I tried to correct my posture in response.  Heading back along the waterfront, past the majority of spectators, I forgot my own rule quicker than Donald Trump does and could only manage my usual expression of pain.  I pushed just a little harder as the course rounded back into the worst of the wind.  It wasn’t an easy section, but perhaps not quite as difficult as I had built it up to be either.  After what seemed a very long couple of minutes I finally reached the end of the bridge and turned for home.

With a little more than a kilometre to go, I had only dropped a little behind my target.  I had been trying to pace myself to this point, but now, with little to lose, I kicked hard and ran as fast as I still could.  For about three hundred metres I wondered why I hadn’t done this earlier, then reality caught up again.  My legs and lungs were both burning savagely and I could feel myself getting a little light-headed.  I continued to push though.  Bile was rising in my throat as badly as it does when I hear Peter Dutton speak, but I managed to keep pushing into the final turn.

I had mentally shortened the final straight to something like 50 metres, so I got a shock when I got there and realised it was a few hundred (and despite what Malcolm Roberts suggests, choosing to believe something doesn’t actually change reality).  I made my way to the finish line and slowed thankfully after crossing.  I grabbed myself a drink and made my way around congratulating other finishers and cheering on those coming after me.  Despite struggling in the middle of the race I was pretty happy with my overall run and it was amazing to see how many people had run PB’s (you can find full results here).

Special thanks to Richard Welch from Epic Events and Marketing and to Northern Suburbs Athletics Club for organising the event and to all the volunteers who supported another great day of running in Tasmania.
Powered by