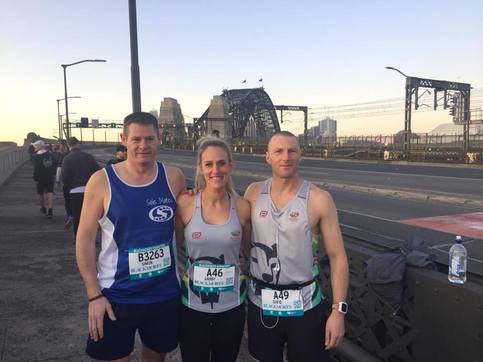 I woke up oddly calm and confident (although still much earlier than I wanted to and with no hope of getting back to sleep).  This is very unusual for me before a race- usually I’m as scared as Pauline Hanson is of factual reporting.  For some reason, despite all the evidence from every other marathon I’ve run telling me this was going to be painful, I felt really optimistic about having a good race- is this how climate change deniers feel all the time, because if so, I can see the attraction.

It was a short walk to the train station and a quick ride to Milson’s Point where we got off and joined the slow moving sea of people converging on the starting line for the half marathon.  Realising how early we were, we turned around and tried to make our way out and up to the Harbour Bridge where we could watch the half marathoners run past.  Fighting our way back against the flow of humanity was nearly as fruitless as NO campaigners in the Marriage Equality debate trying to withstand the tide of history, but eventually we were outside the press of people and climbed a flight of steps (much to Simon’s consternation) to get up on to the bridge itself. 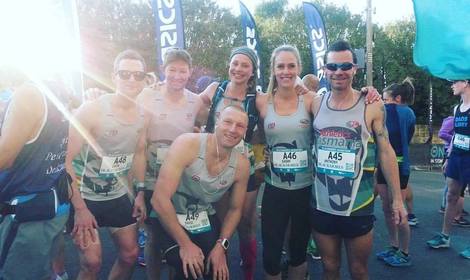 The sun was rising behind us as we watched thousands of runners go by.  Amongst the enthusiastic throng were a number of our friends so we cheered extra loudly every time we saw anyone we knew.  Soon enough it was time to go and start getting ready ourselves.  As I was so busy taking in the atmosphere, the start of the race crept up on me a bit.  I had to warm up in less time Michelle Jenneke, then took a last trip to the toilet and a few photos, and was soon at the start line with Gabby, Annie, Drew and Anthony waiting for the starter’s gun.  There were still no nerves.  I was just excited and optimistic about what the day had in store.

The first minute of the race is usually the trickiest as everyone starts crowded together and you have to be careful not to trip on other runners.  We ran north for about 500m before looping around onto The Harbour Bridge.  Crossing the bridge itself was glorious with the city spread out before us.  The wide smooth tarmac felt like I was running on a race track (which I suppose I was today). 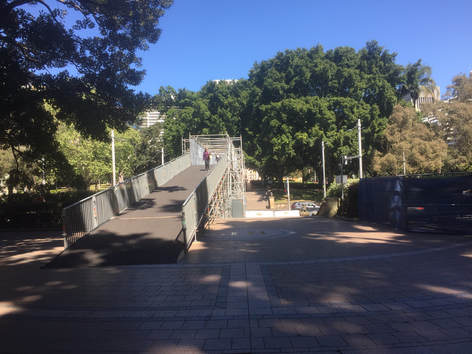 We looped back on ourselves and spiralled down into a tunnel coming out on Elizabeth Street.  As I often do at the start of a race, I had gone out a little quicker than I had planned.  Not wanting to flame out like a Trump election promise, I consciously dropped speed a little, looking over my shoulder and noting that the pacer wasn’t far behind.   It didn’t take long for the pacer and the 20 or 30 people running close behind him to catch me (I’m still going to call him my pacer from now on because I share about as well as a five year old with no siblings).

We ran through Hyde Park, passing the elaborate fountain and crossing the rickety temporary bridge that had been erected for us to cross the imaginatively named, Park Street to the northern side of the park.  We continued through into Oxford Street at the end of the park.

Oxford street itself was a gradual incline, but barely enough to notice this early in the race.  I had to admit, I was feeling really good, but much like a nervous Richmond supporter trying to keep a lid on things this season, I didn’t dare believe it would be this easy for the whole way.
​We turned back on ourselves after running along Moore Park Road for a while and headed back the way we had come, turning left and passing the SCG before making our way into Centennial Park.  We ran in the shade of mighty trees and beside rippling lakes that glinted in the sunshine.  But while it was aesthetically beautiful, this section of the course was also where the track became slimmer than Malcolm Roberts' chances of keeping his senate seat, and the tight pack of runners following my pacer became claustrophobic for me- even Donald Trump’s attractive female employees have more personal space- and I was a bit worried about the possibility of tripping on another runner.

We did a surprising amount of distance, running through the park, featuring a few more sharp turns (this race featured nearly as many 180 turns as Nick Xenaphon’s policy statements), which gave me plenty of chances to wave and high-five friends who were behind or ahead of me.  In no time, we were on our way back out of the park and heading back towards the city.  I enjoyed the long gradual downhill as we headed back along Oxford Street and turned into Hyde Park excited because I knew my friends who had finished the half marathon would be waiting nearby. 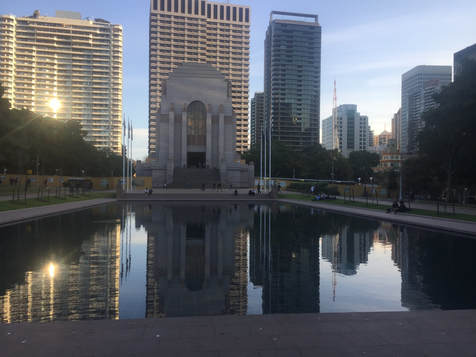 ​I passed the War Memorial and saw my friends up ahead, cheering wildly.  I was barely tired at this point, but the added encouragement from friends had me feeling invincible.  We crossed the little bridge once more.  The thunderous sound of our feet on the metal structure drowned out any other sound the same way a head butt to Tony Abbott drowns out a bomb threat to AFL House.

Leaving the park, we were suddenly surrounded by towering buildings, as we cut a zigzagging course through the CBD and down to The Rocks.  I had really appreciated the work of our pacers, but in the narrower twisting streets of the city I was really conscious of how congested the pack behind them was.  I was constantly having to watch my step and adjust my speed around every change of corner and approaching drinks stations.

Still feeling really strong in the legs, I elected to run ahead.  Thanking the pacers for their assistance, I lengthened my stride, not pushing too hard, but not holding much back either.  I reached the waterline and followed it to the left, crossing beneath the gargantuan structure of Harbour Bridge far above.  My confidence continued to rise as I overtook a number of runners through the next few kilometres, as the course meandered its way through the streets, including several really spectacular segments over the water in Darling Harbour.

With little warning, I began to tire.  Not catastrophically, but I felt a change.  This concerned me as I had actually been waiting to run the final ten kilometres a little faster if anything.  I tried to put my concerns to the back of my head and hold my speed as best I could.  But if you don’t follow a plan to effectively manage your energy demands, you are going to be in for trouble at some point (Malcolm Turnbull take note).  I did another 180 around a bollard in Pyrmont and finally felt I was heading for home at around the 31km mark.  I was surprised to see that my pacer was still less than 100m away, following with the relentless persistence of an unanswered Linkedin invitation. 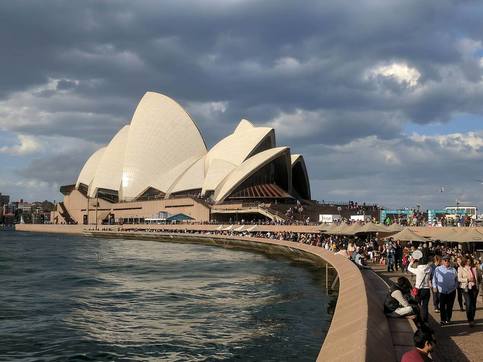 ​The final quarter of the race was perhaps the most picturesque, as we followed the very edge of the waterline back towards the Opera House.  It was made harder by all of the turns, as the waterline had more curves than Kim Kardashian.  I suspected I didn’t have much left in the tank, but I was determined to give it a go anyway, optimistically hoping I might surprise myself.  Sadly this didn’t happen.  Much like the energy industry, I was finding the constant changes of direction difficult and was probably not as efficient as I could have been as a result.  My feeble attempt to push harder was barely enough for me to maintain my pace.  I had hoped to channel Beyonce, when I left my pacer to run solo, but it turned out I was closer to Kelly Rowlands.  I was painfully aware of this because my pacer continued to hover behind my back as surely as Abbott stalks the Prime Minister’s (although much more benevolently, I should add).

I was really hurting as I ran around the boardwalks into Circular Quay but it was still a pretty special moment.  My pacer had caught me once more and was right beside me, spurring me on.  Despite his words of encouragement, I couldn’t believe how difficult the thought of running another kilometre was.  By now there were crowds of cheering spectators everywhere and I could see the magnificent Opera House from across the quay. 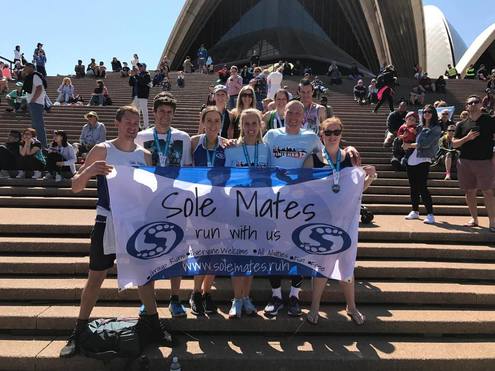 ​I wanted to go faster and wished I could pluck extra energy from nowhere the way the government plucked money for this shameful plebiscite, but I was running on an empty tank.  Still, I somehow kept going and at least didn’t slow.  I felt an amazing mix of emotions as I crossed the finish line.  Exhausted and in no small amount of pain, I smiled with delight when I saw all of my friends waving and screaming 20 metres away at the base of the Opera House steps.  I staggered over to revel in their company and watch the rest of the finishers.  I was overwhelmingly grateful for the moment.  Grateful to my amazing friends who had come with me to share the experience; grateful to all my friends at home who had joined me on training runs and given encouragement or advice; and to everyone who had wished me luck.  It had all played its part in reaching a difficult goal (for full Sydney Marathon results follow this link).

It had been an amazing run.  Not an easy one due to all the turning, but beautiful, and made twice as awesome by the presence of so many wonderful friends.  I didn’t quite get the race right and would have liked to finish a little stronger, but was still rapt with my efforts.  Having trained really hard in the last few months, I had been pretty confident of running a PB and had beaten my previous best at the Cadbury Marathon this year by nearly five minutes.  I had let myself get carried away by how good I was feeling in the middle third of the race and had reset my goals anticipating an even faster time, which I hadn't been able to hold on for, but I wasn’t going to let that get me down.  I have developed a deliberate policy of setting aggressive goals that I expect to sometimes fail, in order to not limit myself.  I also fully expect to be back here next year and hope to run faster again.  As always my thanks to the organisers and to all the wonderful volunteers for playing their part in a terrific event that I won't forget for a long time.
Powered by