The best way to commute 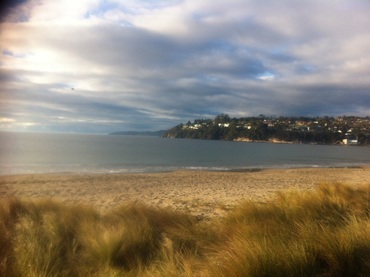 It would be nice if I could get up when I want (except on Wednesdays when I’m rudely awakened by the dustman), but I’m not Damon Albarn so I get up around 6:15 most mornings.  A funny thing happens at this point.  Early morning exercise, which the previous evening had seemed really important to my recovery, suddenly seems about as urgent as Marriage Equality is to Malcom Turnbull- I’m generally in favour of it, I just don’t want to take any pain to make it happen.
Despite some initial reluctance, I usually kick myself into gear and am leaving the house around 6:45.  The few times I wuss out, I usually regret my choice quicker than St Kilda after trading for Jake Carlisle.  I only have to get to the end of drive to remind myself why I love Tasmania and by extension, riding to work.  Kingston Beach is usually placid and quiet at this time, with the low sun glinting on the calm water.
It’s a flat and easy couple of kilometres out to where Beach Road meets the Channel Highway, which I do quite slowly and use as a bit of a warm up.  That changes pretty quickly once I turn onto the highway and begin the climb up to Bonnet Hill.  The first few hundred metres is pretty hard work until I pass the golf course, where the slope decreases.  Maintaining the correct gear ratio as you rapidly decelerate is a delicate balancing act that makes the Prime Minister’s efforts to balance progressive elements within his own party with the loony far right look easy.
After the initial climb, the rest of the hill is quite gentle.  Either side of the road is pretty green and despite the road narrowing and bending sharply at times, I feel pretty comfortable most of the time.  Most drivers on this road are pretty courteous, perhaps sensitised from the high number of cyclists that use the road.  It is a positive sign that councils are starting to include cycle lanes in their road infrastructure priorities.  Unfortunately the one on the Channel Highway is in more pieces than Tony Abbott’s marble table, but I try to stick to them as much as possible.
It is a few kilometres to the top of Bonnet Hill and the view from the top is pretty good early in the morning.  Looking down towards Taroona Beach, the Shot Tower stands in the foreground, surrounded by trees, while the sun throws a silver reflection on the river behind. 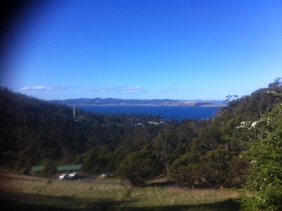 The descent from the top of the hill is quite enjoyable.  The trees that line the road flash past and the fatigue in my legs disappears quicker talk of Vin Diesel’s supposed ‘dad bod.’  The wide flat corners can be taken confidently without dropping too much speed (Walter White would approve).
The road flattens out gradually and I had to start pedalling to maintain speed after the Taroona Lounge Bar.  If the road didn’t have as many curves, Taroona would be the mid-nineties supermodel of suburbs, as it is ridiculously long and skinny, so it takes a surprising amount of time to ride through.
Once on the flat it becomes evident that I’m not a very good cyclist.  I wouldn’t suggest that I have much in common with Liam Neeson (but wouldn’t hate it if you made that assumption), but I do have a, ‘particular set of skills,’ when it comes to riding.  I actually do pretty well climbing hills, maintaining a low cadence and a high gear ratio.  On the flatter parts of the ride, I find it difficult to keep a high cadence and am regularly overtaken by other cyclists on my way from Taroona to town.  As well as the cyclists that go past me, I also see a number of runners and cyclists going the other way and it is nice to exchange a friendly smile or wave.
At the northern end of Taroona, a gentle downwards slope leading into a wide right hand bend allows me to accelerate and I work hard to keep the momentum for when I hit the small hill before the Riverview Inn (don’t worry, I’m not planning on mentioning every pub I go past).  I usually get to the top without having to drop too many gears and am picking up speed soon after again, approaching the big turn into lower Sandy Bay.
From Sandy Bay, the ride in is usually pretty easy, although, being right next to the water you are a little vulnerable to northerly headwinds from time to time.  The boats sit lazily on the water in the bays either side of the casino as I go past.  Sandy Bay starts to get more congested after the university and you have to start being a little more careful with the passing traffic.  This is one reason that despite my best intention, I often forget to check the time as I pass the Mayfair clock (the other reason may be some subliminal knowledge that I am usually later than I want to be so it is better not to know)
The lights at Byron St always get me.  They’re in a little bit of a difficult position to start from, so if I see them going red ahead of me I will sometimes turn left and go up Byron St instead.  It’s a little steeper but not that far.  “Not a great plan,” (as Ironman said to Loki- see geeks, even when I’m talking about exercise I look after you with Avengers jokes).  It is actually much steeper and I slow down a lot.  Then I always get caught waiting at the lights of either Macquarie or Davey Street anyway so it doesn’t save any time.  This has happened a lot, but still once in a while, I think this is worth a try.
Whichever route I take, I then zigzag my way through the centre of town, stopping at more red lights than Hugh Grant, until I find myself in another tiny section of bike lane heading up Argyle Street, turning off as I get into North Hobart and wheeling my way into work a few minutes later.  The journey normally takes 50 minutes, although for some reason I continue to use the defence contracting method of estimation and hope optimism will override historical evidence.  As a result I usually expect to be there in 40-45 and am still surprised when I’m not.

The ride home is a slightly different story.
Powered by