Mt Wellington in Winter:
The Springs, The Chalet and Junction Cabin 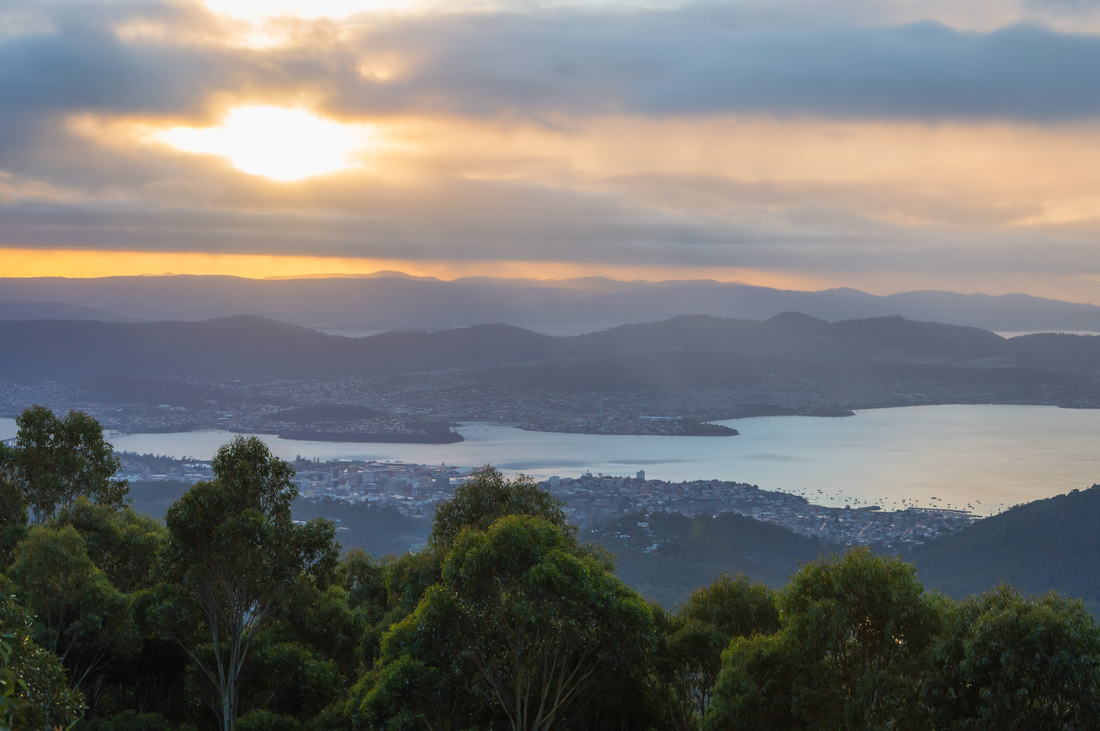 Walking on Mt Wellington in Winter

Well I had nearly as many delays leaving home as The Alexander Spirit had leaving Devonport, but finally I was on my way.  It was another cracking day and it really needed to be appreciated properly with a bush walk somewhere.  I had quite a bit of work to do, so there was no chance of making it a full day excursion.  Luckily, living in Hobart we have the luxury of Mt Wellington looming gracefully in the background.

Due to the fact that the road to the summit was closed just ahead, the Springs was busier than my friend, Cap’n Sam’s tinder profile.  Along with the dozens of people enjoying the snow, were my two friends Sam and Cass, who had been waiting for me for the last ten minutes.

I parked the car and did a couple of last minute adjustments to my pack.  Cass had asked if there was a way of attaching a tripod to my pack, but before I could say, “They’re called shoulder straps,” she had added, “Without the obvious joke,” so I was left feeling a little bit juvenile and predictable (which at least qualifies me for a job as a radio presenter or for a role in an Adam Sandler movie).

We headed up past the loop road to the overflow parking and onto the start of the zigzag track, which was pretty level and easy to traverse, but we had to go one at a time.  Away from the road there was little snow at this height but plenty of ice, the trees to either side of the track were slim but densely clustered (kind of like the girls when I went to high school- and feminists, take a breath, that was neither sexist or demeaning).

The path was occasionally broken by a stream of snow melt which trickled unhurriedly down from the much steeper side of the mountain on our left.  It wasn’t far up a gentle incline, before snow started to appear around us, as did glimpses of the sweeping views to our right.  You could see large amounts of Hobart, The majestic Derwent River and out towards Kingston. 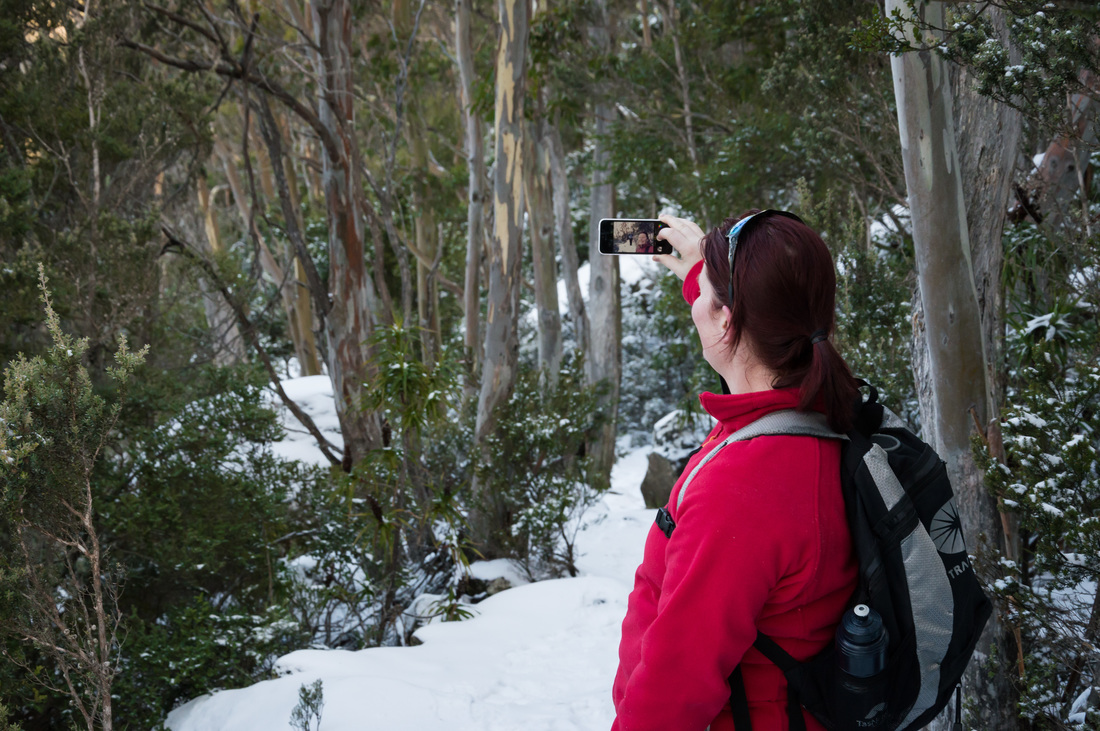 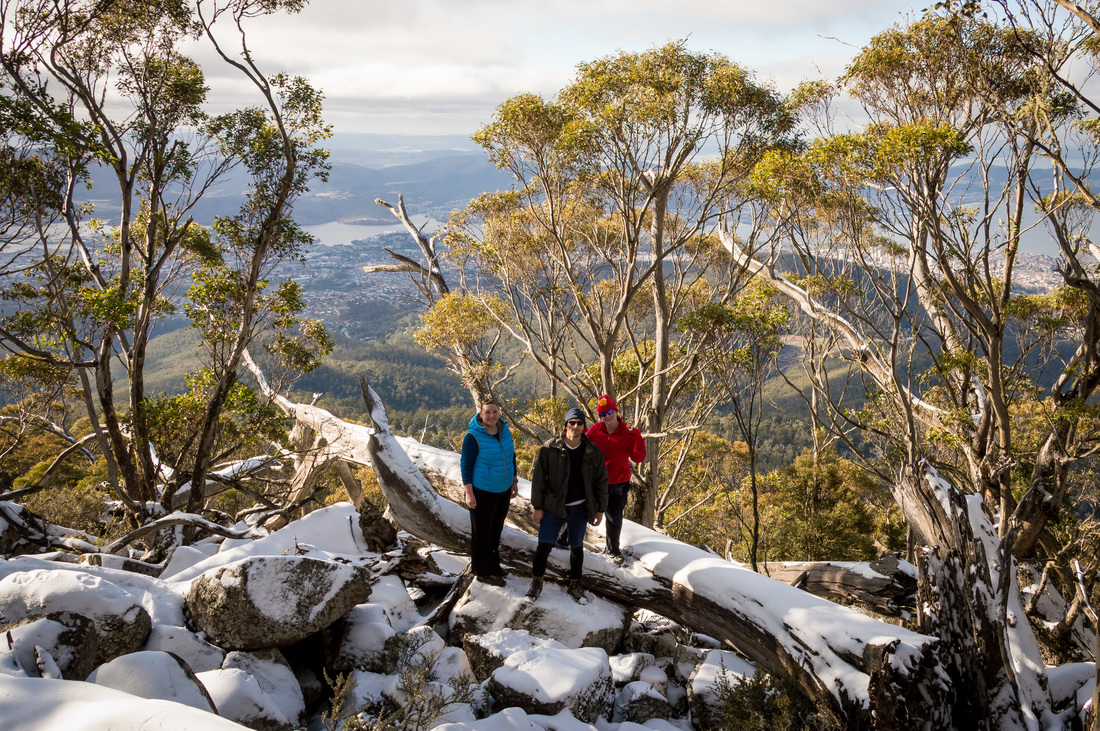 The track from here on was mostly flatter, although we did gradually get a little higher, while the snow became even thicker.  Ducking under snow covered branches often ended up with a shower of snow settling on your shoulders, but even though there was more white powder than you would find in Karmichael Hunt’s locker, it was hardly cold and I had put half of my warm gear away.

Walking beneath the mighty Organ Pipes was a highlight of the trip.  Hobart continued to sprawl contentedly away to our right, sunning itself in the afternoon rays, while to our left, the cliffs seemed to rise almost vertically to a smoky summit that the sun was just peeking over.

After nearly an hour- which would have been a bit less if Insta-nerd Cass hadn’t had to stop for a lot of photos (which I didn’t complain about because they are usually awesome and I wanted to borrow some for this report), we began a short descent down some slightly icy steps to the Chalet itself.  Here we stopped for lunch, which for me consisted of a beer, a muesli bar and some Toblerone (yep, nutrition- I heard of that once).

After a leisurely lunch and a few more photos, we crossed Pinnacle Road and headed towards Hunter’s Track, which was about 50m away past a couple of small water features created by more streams of snowmelt.  Seeing another photographer setting up their tripod, I was half way to taking off my pack and getting Cass’s tripod out, before she told me she told me I didn’t need to worry.  The beginning of the track descended quickly (though not as fast as respect for Bernard Tomic).  After about 10 minutes of heading in a northerly direction, the path split again, with the Old Hobartian’s Track heading towards Lenah Valley to our left, and Hunter’s Track taking a sharp right and heading towards Junction Cabin.

We were now actually below the snowline and the track was much muddier.  It continued to descend winding its way across the mountain in a southeasterly (I think) direction.  The surrounding vegetation was becoming increasingly thick and verdant, a mixture of tall trees, moss-covered boulders and mounds of cutting grass.  Every now and then, the muddy track was replaced by a rocky walkway that crossed a scree slope.  One of these boulder fields was deemed the next spot for Cass to stop for some more photography.

After another hour or so, we stepped out into the clearing where Junction Cabin stands.  The cabin itself is aptly named as five separate tracks led off in different directions from this point, and most of them branched out into further tracks.  Junction Cabin is kind of the ancient Rome of the mountain as all tracks lead there.

After another break, we began heading back towards the Springs, following the Lenah Valley Track (which obviously doesn’t lead to Lenah Valley when you walk that way- something that bothers the anal-retentive side of me).  The track contoured back around the mountain, rising a little as we went.

The surrounding rainforest was subtly different.  The rocks had less of the green moss, but were frequently bleached white with algae.  We passed several junctions to other tracks but pressed on with the single-minded purpose of Tony Abbott hounding Peter Slipper out of office for abusing parliamentary entitlement (awkward).  Snow gradually began to reappear around us, although it would disappear again as we snaked in and out of clefts in the mountain that were exposed to alternatively more or less sunlight throughout the day.  After a little more than half hour we passed Rock Cabin, which based on its unpretentious name was clearly not named by a celebrity.  From here we knew it could not be much further back to the car. 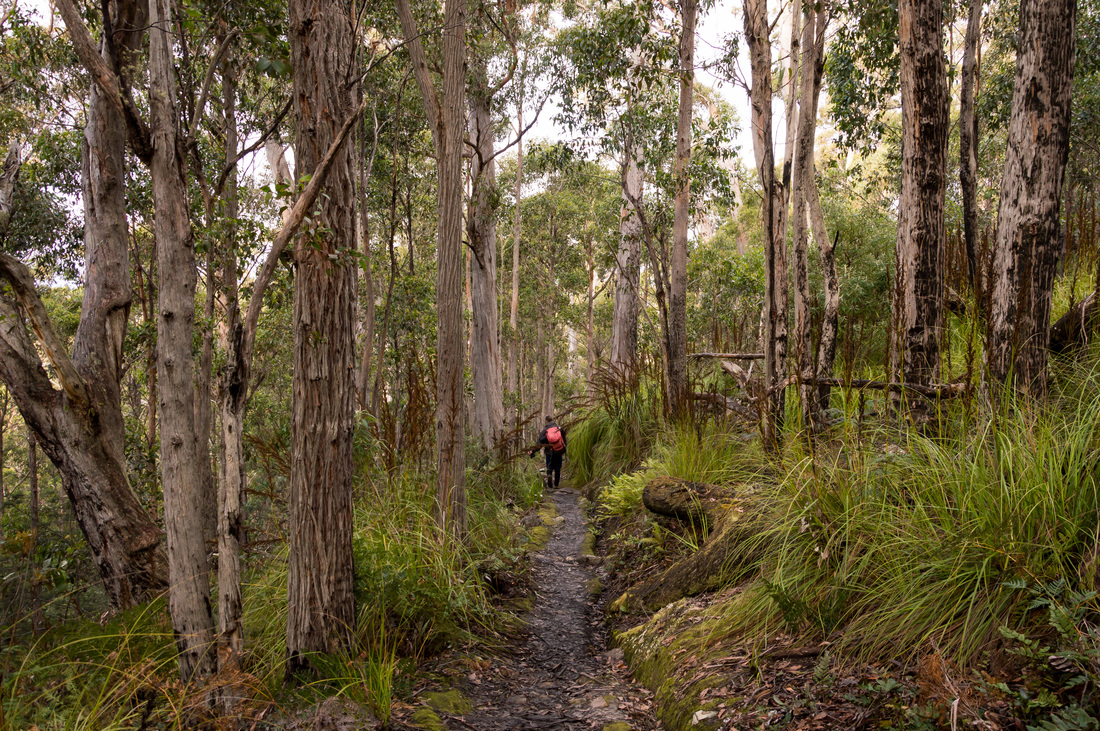 Soon after, the left hand turn to Sphinx Rock lookout appeared.  The walk to the lookout was even shorter than Billy Gordon’s time as the Labor Member for Cook, so we happily took the detour which led to a child-proof gate that Sam had some difficulty opening.  The reason for the gate was immediately obvious when we got to the lookout.  Sphinx Rock itself was actually a small cliff that looked out over the forest below it and the rest of Hobart stretching away in the distance.  We joined a group of nervous parents who were imploring their children to stay away from the edge, as they tried to enjoy the view.

After Sphinx Rock it was an easy 15 minute walk back to the carpark.  Allowing for a number of photo stops and a meal and drinks breaks, the walk had taken about 4½ hours in total- or about the length of an English innings in cricket.  The air on the mountain was starting to cool noticeably as we had a last drink and got into the cars, but within 15 minutes I was home tucking into a big meal.