A long way on a paddle board 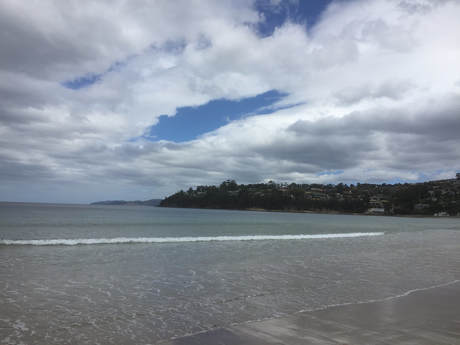 Over a bottle of wine on New Year’s Eve, the beautiful Aimee asks me to help her tick an item off her bucket list, but I’d need to take off the clothes I was wearing.  Obviously there was only one thing she could have been referring to.  We were going paddle boarding (that is what you were thinking right?)
​
So the next morning we met at the northern edge of Kingston Beach with our boards.  I’m wearing my boardies and a life jacket (I had learnt from Malcolm Turnbull’s example during the week and definitely wasn’t leaving that behind).  We waded in until the cool water was up to our shins, before dropping our SUPs (stand up paddleboards) onto the water and climbing on.
​
There was barely a ripple of swell as the boards glided away from the shore.  I scrambled from my kneeling position up to stand up with the kind of graceful balance that seemed entirely appropriate for this time of morning on New Year’s Day.  I managed not to fall in though and after I had got my balance I was able to begin paddling.  Kingston Beach is a truly magnificent sight from 100 metres of shore.  The busy beachfront all but disappears, dwarfed by the distant spectre of Mt Wellington. 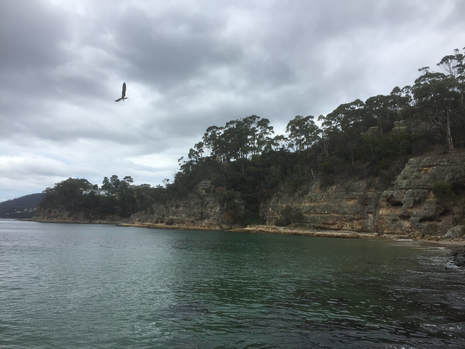 Aside from not falling off them, the main challenge of using a SUP is moving in a straight line.  Since the paddle itself has only one blade, the paddler can only take a few strokes on one side before the board begins to veer off course and they have to switch sides they are paddling on.  In this way, paddling a SUP is kind of like governing the country (although you don’t get rich doing it from my experience), paddle too much on either the right or the left and you are in trouble.  However (and Malcolm Turnbull would do well to take note of this) if you just don’t paddle for fear of going off course, you end up going nowhere or just get carried by the current.

Once we had left the protection of the Alum Cliffs, we could feel a rolling swell beneath our boards, aiding our southerly course (but helping me balance as much as Scott Morrison is helping the Australian economy).  We rounded the headland at the southern end of the beach and began to make our way past the quiet rocky shore of Boronia.  As is often the case, the tranquil beach was deserted and the only sounds were our paddles (and my chatter).  The cliffs at the far end of Boronia extent outwards to another point before cutting back in to form a longer rocky coastline that separates Blackman’s Bay and Boronia. 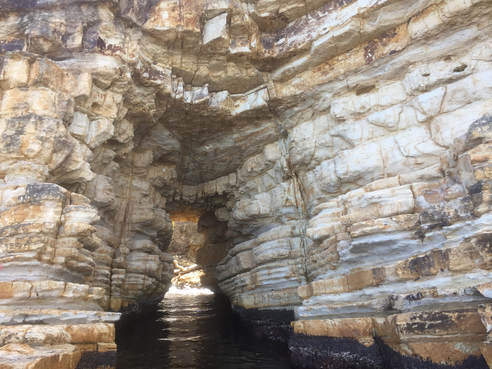 While it is not a particularly quick mode of transport, paddling a SUP in benign conditions is not the most exhausting of activities.  My heart rate was lower than the corporate tax rate as I enjoyed the gentle movement of the board and the sunshine on the water.  At about the 2km mark, I began to notice some developing fatigue in the arches of my feet from the tiny adjustments I was constantly making for my balance.  There wasn’t much I could do about it though so I sucked it up and kept on paddling.

We began to be hit by gusts of westerly wind, so we tucked in a little closer to the cliffs to our right.  The cliffs themselves were fascinating.  Their craggy rock faces a mottled mix of whites, greys and browns, overlaid by the occasional twisting root or dangling tree branch.  We passed a couple of smaller caves before we approached the famous Blackman’s Bay Blowhole.

Much like Kingston Beach earlier, the blowhole is particularly striking when viewed from the water- a surprisingly straight tunnel leading to an open pool with high, sheer walls.  Even on a relatively calm day, the water inside was disturbed and angry (much like Peter Dutton) so we chose not to try paddling inside. 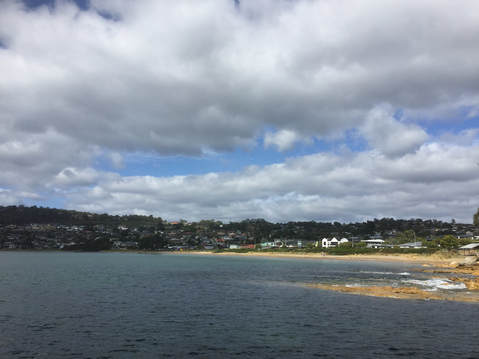 We paddled on, rounding the final point so that the bright sand of Blackman’s Bay lay before us.  It was at this point that a stronger westerly breeze picked up, driving us backwards like a Liberal Government.  Thankfully we were still able to make some headway and soon the breeze slackened, along with the swell as we came closer to shore.  The final 500 metres was a languid cruise along the beach to the end.
​
The whole paddle took about three quarters of an hour and was a lovely way to start 2018 on a positive note.

For all those silly memes about starting different songs in the final minute of 2017 so that the chorus played at midnight to, "start the year right," this was a much better way for me.
Powered by