Failure can be a step towards success 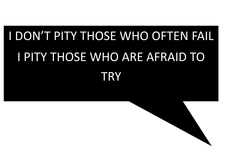 Failure.  I recently experienced it with a goal that was quite important to me.  I actually thought I had insulated myself quite well, reminding myself that it was an extremely ambitious goal and that success was not likely.  I had also put some cognitive effort into accepting that, even if my ultimate goal was unsuccessful, the exercise had been productive and positive anyway.  Armed with some prepared self-talk and very content with my life and achievements to date, I was surprised by how hard the experience hit me.
When it happens in relation to goals that matter to us, it is not an enjoyable experience and one that we often try to avoid.  I haven’t had to deal with many failures of this kind in the last two decades.  I had assumed this to be a fortunate aspect of my life but I am now questioning this assumption.  Perhaps I have been selling myself short.  Would I have achieved more if I set higher goals?  Why are we afraid to fail?
Maybe I am the only one who carried my original assumption, but I don’t think that is the case.  It seems an implicitly shared understanding.  People who are rarely seen to fail at their goals are the ones who are often envied or admired.  The phrase, “Know your limits,” is an aphorism of wisdom, not self-doubt.  But I want to question this paradigm and suggest a lack of failures actually indicates the possibility of underachievement.  This is not a criticism of those who do set goals that are within their reach.  No one is morally obliged to go beyond their comfort zone.  This is more directed towards those who see failure as a negative reflection of themselves and allow fear of failure to hold them back from even trying.  For this reason I thought I would have a more in depth discussion of what failure is and- just as importantly- what it isn’t.

So what is it?
Generally failure comes in one of two forms.  We either physically fail to achieve some task or goal due to a lack of ability, fitness, time or expertise.  This often results in a sense of inadequacy and wasted effort.  We can also consider it a failure if we are not selected or accepted for jobs, positions, representative teams and the like.  This can add frustration and a feeling of rejection as well.  While we can laugh off minor failures without seeing them as any reflection of our lives, either form of failure is difficult if we are fully invested in our goal.
Whatever well-rehearsed coping strategies one has made for dealing with it, failure is still a kick in the guts.  So much of adult life seems to involve underplaying the true extent of our emotions as a measure of self-protection.  When we are willing to admit the full importance of something to us, we admit an uncomfortable level of vulnerability.  When we fail in these circumstances, the hurt and disappointment can be very raw.  For this reason, it is no surprise that we often attempt to protect ourselves by avoiding situations, but that is why we are not prepared when we finally dare to challenge ourselves again.  I would argue this aversion is often exacerbated by some embarrassment derived from misunderstanding about what failure really means about us.

What it’s not.
Despite what the petty and childish elements of society would have you believe, failure is not something to be ashamed of.  It should be a badge of honour.  It is an inevitable consequence of a life spent pushing yourself to your limits and not accepting mediocrity.  No one can have such an accurate gauge of their exact capabilities that they can set truly ambitious goals without occasionally overreaching and failing.  Moreover, when it does happen, failure need not even be a permanent event, as it may be superseded on a subsequent attempt.
Following on from this, failure is not even something to avoid, but is an integral learning aspect to maximising your successes.  In many cases, each failure brings us closer to ultimate success, as we learn a little more from each attempt that informs our future efforts.  Even if we can’t eventually replace the failure with final success- sometimes we set our goals much too high- there is still a lot of positive we can take out of a failed attempt.

How is failure a positive?
Generally we put a lot of effort and training into attempting something we value.  Just because the attempt was unsuccessful, doesn’t mean the effort was wasted.  Whatever our goal is, if it is challenging, then the chances are our preparation will require some form of self-improvement.  It might be building our fitness, education, ability to handle pressure or our organisation skills.  Whatever it is, this kind of self-development is rarely wasted.  It remains a benefit for the rest of our lives.
Another important element of enduring failure is the internal strength we build from the experience.  Life is not always perfect or fair and sometimes comes with disappointments.  As mentioned earlier I have had my own recent experience of failure, which hit harder than I expected.  However I am now better prepared and stronger for the next time this happens (which won’t be too long I imagine).
Alongside this internal strength comes a freedom.  Freedom from fear of failure, which, I would argue, is a greater obstacle to achievement than anything else.  It certainly held me back for many years.  It took the death of someone close to me to remind me that life is too short and precious to waste staying in your comfort zone, and denying yourself the chance to be everything you can be.

So that’s my take
I am concerned at how the fear of failure limits so many of us.  I understand it, as the pain of failure is very real, particularly when we are unaccustomed to it.  But if we do get the courage to chase a dream and admit the possibility of failure, we must be careful not to add any sense embarrassment or shame to it.  I’m cringing at how clichéd this sounds, but a failed attempt should be viewed as a positive development in which you have learned a little more about how to get to your goal, or perhaps that you need to modify your goal.  By contrast a success, often teaches you much less about yourself and your capabilities.