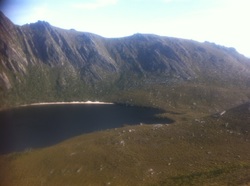 Looking up from Lake Rhona, the mountains that surround it don’t look much like a walking circuit.  They are massive slabs of stone, all leaning slightly off vertical in the same direction.  The grey rock is broken occasionally by vertical lines of vegetation that clings to the stone as tenaciously as Tony Abbott clings to his hopes of regaining leadership of the country.
After a hard walk in the previous day, today was the reward.  We woke on the white sand and took our time watching the sky lighten above us.  After a light breakfast we set off on our trek carrying little more than a camelback and a pocket full of muesli bars.
There are no actual signs for the beginning of the track, but there is a faint track on the eastern side of the lake just near where you cross the river on the way in.  After a few hundred metres it becomes harder to follow than arguments against gun control, but the lowest ridge that you have to start climbing runs pretty much directly opposite the campsites and is pretty obvious, so you will find your way to base of the ridge one way or another and then the path is pretty obvious for a while as it follows the surrounding cliffs in a clockwise direction.
A few people I spoke to did end up having to make their own trail to the base of the first ridge, although we didn’t actually even go that way.  We backtracked around the way we came in until we were on the ridge we had climbed up.  From here we took the disused track to the top of the ridge to get our first look at Lake Rhona from above, with Reed’s Peek fully visible behind it (as you get closer to the lake, you can’t actually see the summit of the peak anymore).
There isn’t much in the way of a track down the other side of the hill, so we just zigzagged our way carefully down the steep rocky slope.  We were soon enough at the bottom and immediately climbing again up the side of a ridgeline that ran diagonally up until it met the rocky cliffs that surrounded the lake.
The climb evens out as you arrive at the low point of a saddle that tops the ridge.  There is a solitary stone obelisk, maybe eight feet in height, which had been visible right from the beach where we had camped the night before.  We passed the stone marker and continued to climb higher as the cliffs circled the lake.  The views back down to the lake were incredible, while as we got higher views out to the south and west also developed, with Lake Gordon stretching a long way to our south.
When we were eventually ready, we retraced our route back to the junction and this time took the other path that began a rather uneven course around the back of the peak.  After a little while, I was getting a bit worried that the rough path didn’t show any inclination to continue circling the peak and looked to head towards another set of mountains further to the north.  Thankfully another vague junction appeared and we turned sharply right, moving around the peak before beginning a very steep descent to the lower ridgeline to the north of the lake.  A lot of this descent was an unforgiven as the Saudi Arabian legal system, with the final 50m of vertical distance almost free of zigzags, despite covering as little as five or ten metres in horizontal distance.  Despite what it sounds, it is not that bad, although professional whingers such as Peter McGlone who are concerned about the lack of a safety rail at Cape Huay, would have been horrified.  Seriously though, those who are concerned about their joints or who find heights uncomfortable might prefer to descend the same way they came up instead of taking this route.