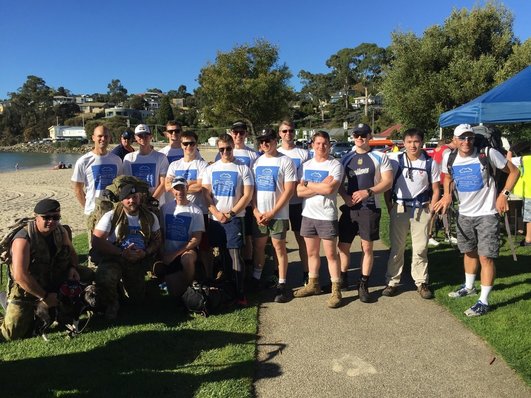 Trooper Matthew Millhouse was- and remains- a personal hero of mine, as well as a treasured friend.  So it was a privilege to play a small role in organising the inaugural Matthew Millhouse Salute to raise money for the White Cloud Foundation, an organisation dear to Matt.
​
We lucked out and got a cracking day weather-wise, but I was glad we weren’t starting much later in the day.  It was heating up quickly.  The sun was out in full and the water of Kingston Beach showed barely a ripple, as participants gathered at its southern end.  I was a little later than I had meant to be after a tweet from Donald Trump had prompted me to pull my house apart checking for evidence Obama had been wiretapping me or spying on me through the microwave (turned out he hadn’t but I now I may need a new microwave).

I put on my event shirt, got a good luck hug from the inspirational Terese Millhouse and then it was pretty much time to set off.  In last year’s trial event, I rode with the cycling group, but this time I was walking with some friends on the ‘army style’ pack march.  Now the event described it as army style, but this depiction of army life was no more accurate than Michael Bay’s fantasies of the military. 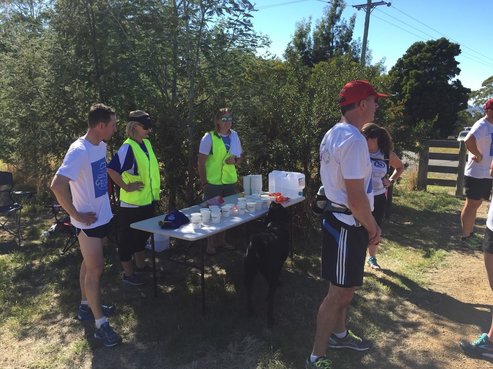 We made our way along a busy Osborne Esplanade as the paddling group launched and kayaked quickly away on the sparkling water.  We crossed the bridge over Brown’s River and the carpark on the other side, passing the track to the Alum Cliffs, which I would have loved to follow, but we couldn’t due to safety concerns.  Not that the track is dangerous, but if someone did have a catastrophic accident and needed urgent hospitalisation, we were too far from the road for vehicle evacuation.

Tyndal Road wound its way uphill and would have been quiet if it wasn’t for us, with Jonas’ retro mix of tunes mixing with the babble of conversation.  The slope was not extreme, but certainly enough to slow our pace slightly.  After about fifteen minutes, we reached the top of the road where it joined the Channel Highway.  Being a much busier road, awareness of traffic became more important from here, especially as the next stage of the highway had no footpaths and verges that were as narrow as Pauline Hanson’s world view.

​It was another 15 minutes of easy walking to reach the top of Bonnet Hill.  The concept of a footpath remained as neglected as our carbon emissions target, so from time to time we were pushed right into the leafy foliage that lined the road, but for the most part it remained pleasant travel (as long as you didn’t get caught by blackberry bushes that lurked dangerously amongst the more innocuous greenery like cuts to services in ‘omnibus savings bills’).

Reaching the top of the hill, we came to the drinks station, manned by a couple of wonderful volunteers and a very friendly dog.  The next section of road had been deemed unsafe for walking, so a mini bus was waiting on standby to ferry us down past the Shot Tower and drop us at Baringa Road, where the footpath began. 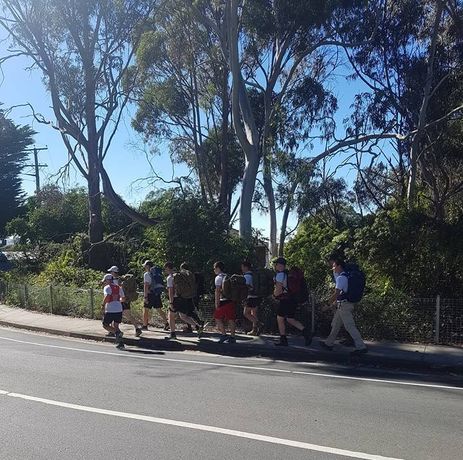 From here we resumed our journey, everyone in good spirits.  The Derwent River below us looked a lot less calm than it had at Kingston, with some obvious ripples even from this distance.  I wondered how the kayakers were faring, but I needn’t have worried, as they were already most of the way to Sandy Bay by now.

The road flattened out near the Taroona Hotel but our pace didn’t really slow.  We were soon passing the magnificently situated Taroona High School which has grounds running all the way down to the beach.  Aside from its incredible locale, Taroona High is notable for producing such famous alumni as Princess Mary, David Bartlett and- more importantly- myself.

It was around the school that we began to be passed by the first of the runners who had started in waves some time after us.  It was fantastic seeing the runners go past as so many were friends of mine.  The Solemates running group was heavily represented, along with a number of other friends, including Ray and Jerry who had come down from Launceston and Wollongong respectively, as well as the irrepressible Nathan who had meant to sign up for the kayak, but accidentally signed up to run and suddenly had to start training.

After the Trugannini reserve, we encountered a second small climb that flattened out next to the Riverview Hotel (I don’t actually navigate by pubs).  From here it was an easy kilometre of gentle decline down to Long Beach where the BBQ and drinks were waiting. 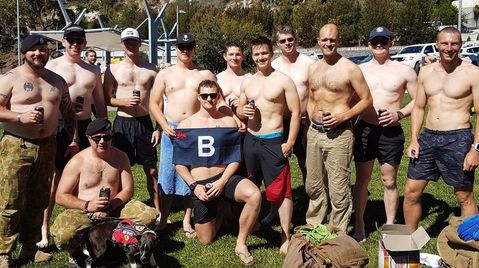 ​The kayakers and many of the runners were already finished and relaxing in the bright sunshine by the time we got there.  The final runners were not far away either, but the cycling group- who'd had much further to travel- had been delayed by a flat tire and had advised they would be a little later than anticipated.  We dropped our packs with satisfaction and smiled at the friendly reception.  Work done, it was time to enjoy ourselves.  The post-march (it was still in March, but after our pack march- note the importance of capital letters, kids) socialising was just as much fun as the walk itself.  There were a lot of families with children who came down to be there afterwards.  On arrival I had my name ticked off by a caring and enthusiastic volunteer named James (who worked very hard on his own fundraiser for dementia last year) and his mum to make sure no one was left out on the course.  My first priority on arrival was saying hi to Matt’s parents, David and Jenny, who were there with a large number of family.  After that I grabbed a large plate of food which I ate as I wandered around talking to the many wonderful people who had been part of the day.

The great thing about walking with a pack is although it’s slow, you can carry everything you need for afterwards.  Once I finished eating, I ripped out my boardies and was changed quicker than Hansard when Barnaby Joyce misleads parliament.  The water of Long Beach was beautiful in the 30 degree day and I was in and out more regularly than Usman Kawaja in the Australian cricket team. 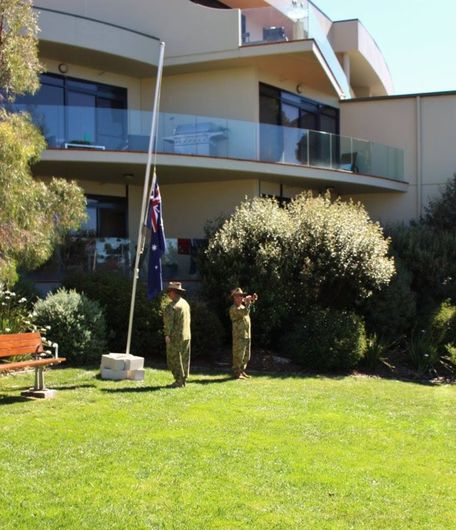 While the majority of the event was relaxed, it also included a short formal section at 1:00.   After an emotional thankyou from Terese Millhouse, who announced that the event had raised over 7000 dollars, and some words of thanks from the CEO of the White Cloud Foundation, Adam Scott, Terese introduced event patron, Major Garth Callender, who was Matt’s troop commander on the day of the blast that would eventually take my friend’s life (check out his amazing book, After the Blast).  It very nearly took Garth’s life too, as he was the one that bore the worst of the shrapnel wounds.  I had the privilege of listening to a presentation by Garth the previous evening and he also accompanied us on the pack march so I was especially glad he had made the effort to come down from Sydney for the event.

After sharing his own thoughts and tribute to Matt, Garth recited the Ode, before an Australian Army bugler played The Last Post, as a flag was lowered to half-mast.  It was a nice way to spend a moment reflecting on a friend lost, amongst so many friends his life had touched.

​I really couldn’t have been happier with how the day went and I must commend and thank all the participants and volunteers for playing their part in generating a wonderful spirit of enthusiasm and community for the day.  I am looking forward to next year!

There is also an amazing collection of photos from the event that can be accessed here.
Powered by