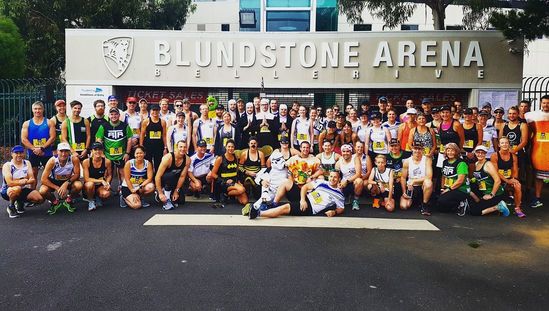 I’ve gotta admit that I didn’t really have my normal pre-race excitement when I got up today.  I wondered if it was due to uncertainty over the leadership of the National Party, but decided it was more likely down my niggling hip injury.  I had been carrying the injury since the Cadbury half marathon a month earlier and Taylor Swift had assured me I could shake it off, but reality was proving a little unforgiving in this instance.

I lay in bed a little too long but eventually knew I had to get going and get out of the house pretty quickly.  Tasmania police and the event organisers had been proactive about getting the message out early that the Tasman Bridge would be closed for a few hours so I made sure I left a little earlier than normal.  I did a light warm up jog and got to Blundstone Arena a little more than half an hour before the start.

The Solemates were out in force as always.  As I mingled with friends before the race, I felt my excitement return.  We took a pre-race photo and made our way down to the start line.  I’d eaten less breakfast today, so I ate a quick muesli bar which had as much taste as George Christenson’s photos (take your pick from the one with the gun and the one with the whip). 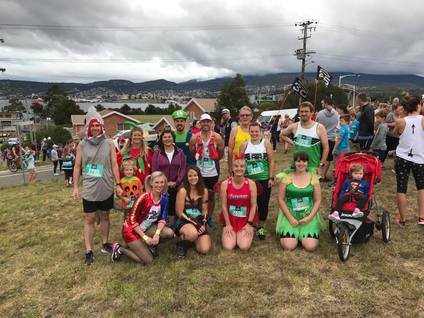 ​With Gone Nuts trail race only a fortnight away, I had made a commitment to myself that I wouldn’t go too hard today, but as Barnaby Joyce demonstrates, some commitments are stronger than others.  The starter’s gun went and before I knew it, I was shooting off down the road and up the first hill at nearly sprinting speed.  Running around the headland for the first few kilometres of the race is incredibly beautiful but it was lost on me a little as I was huffing and puffing in no time.

​Luckily I forgot about my hip like it was the Winter Olympics and despite my earlier lack of energy, I felt like I was moving pretty well as I made my way through Bellerive Quay.  We turned down the hill towards Rosny College and I deliberately began to reduce my speed at this point (Much like Turnbull with our internet), knowing that the hardest section of the run was coming.

​I hit the base of Rosny Hill and started working my way up it determinedly.  I passed the lights about half way up without feeling too bad, but the second half was a long grind and gradually I felt my pace slip as my legs got heavier.  Between the burning in my lungs and the fatigue in my legs, I was really suffering and since I’m not Sam Smith and can’t make a career singing whiney songs about my troubles, I was certainly regretting my enthusiastic start to the race.
​
But although it seemed pretty clear that I had misjudged my strength badly, I was surprisingly philosophical about it.  It occurred to me that this was hardly a disaster and I don’t actually have to run a PB every race.  These thoughts only lasted a few moments before they were censored from my mind the way Malcolm Turnbull censors ABC reports.

I crested the hill and began picking up speed again as I made my way down towards the Tasman Bridge.  While I was glad to be off Rosny Hill climb, I wouldn’t exactly say I recovered from that section in a hurry and I was still blowing pretty hard as I hit the start of the bridge a few minutes later.  There was a huge amount of support at this point.  Hundreds of runners preparing to run the 5km event were crowding each side of the course and shouting enthusiastic encouragement. 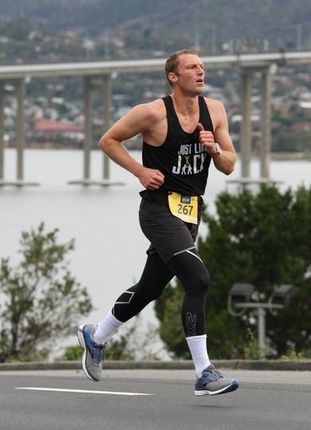 The weather was absolutely perfect (I’m actually surprised The Hodgman Government wasn’t claiming credit for it and telling us that the weather was worse under the previous Labor government) and even the usually windblown Tasman Bridge was crisp and still as I crossed.  When I ran this event last year I seemed to remember the climb up the bridge as being relatively easy, but it turns out I seem to forget more important details than Matt Canovan.  It was a real battle this time.  I gritted my teeth and forced myself onwards.  I had told myself that I would let myself recover as I ran down the other side of the bridge and then start building back up to a faster speed for the last few kilometres once I got to the Domain Highway.

As it turned out I couldn’t get much faster without burning out, but I figured I could hold my pace for a bit longer and promised myself I would find a final effort in the last few kilometres.  I ran past the War Memorial and down towards the Hobart Waterfront, where I turned left into the Hunter Street.  The wide street surrounded by large buildings felt strangely empty after the energy of the rest of the course, but soon we were surrounded by support once more as we approached Salamanca Place.

The noise and energy of the finish line was a huge boost as I ran along Castray Esplanade.  I got kind words of encouragement from a number of spectators on my way out towards the CSIRO.  The esplanade began to rise towards Battery Point, but mercifully I was able to turn around a marker and head for the finish before we did too much climbing. ​ 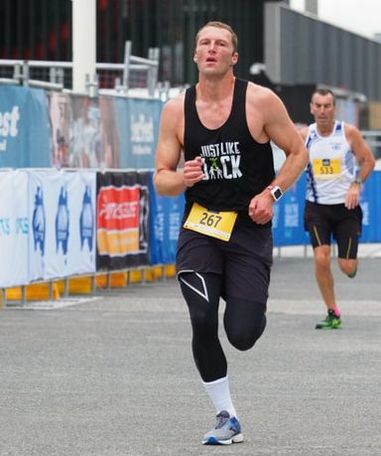 ​The last 500 metres to the finish was a rush of familiar faces as I saw a number of friends coming the other way or lining the course cheering.  The huge finish line was visible from some distance so I urged protesting legs into a final effort before the end.  As usual, I stayed around the finish watching everyone come in from the 5km event as well.  Having begun the day with fairly modest expectations, and probably not run my smartest race, I was pretty pumped to have held on as well as I did.  More than this though, I was absolutely thrilled with some of my friends’ massive PBs and it was certainly a very positive atmosphere, enhanced further by the Run Funners, led by Ben Hirst, backing up from his 48 hour treadmill challenge which had finished less than a week earlier.

In what I think is a brilliant initiative, race photos were available free to all competitors in place of the usual gifts like towels, or hats.  I never order the professional photos normally, but I really enjoyed looking back through them (even if most of them have me grimacing as if I’m being made to watch a game of AFLX).  It had certainly been another great event and I am looking forward to having a go at running it a little more strategically next year.
Powered by