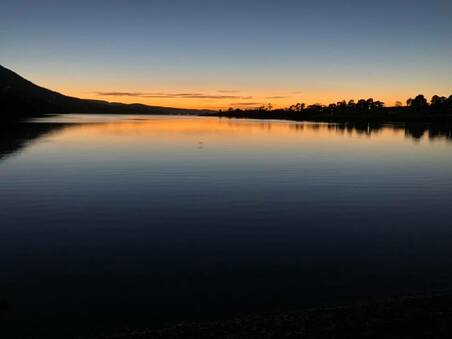 ​Whilst I have really come to enjoy the Cadbury Running Festival, I have to admit I wasn’t looking forward to this year’s marathon with the same level of excitement that I often do.  December and January had been about as good for my fitness as they were for the Coalition’s election chances (although admittedly no sex scandals in the quietblog household) so I was a bit unsure how this race was going to go.

I got up early and went through my gear a few times as I was eating breakfast.  I’m a bit over the top with this, but I figure it's better safe than sorry.  It would be both embarrassing and unhelpful to forget something like my shoes and have to photoshop them in later (as the Prime Minister found out).
​
Whatever misgivings I’d had about my fitness, I couldn’t help but start enjoying myself once I got to the race precinct and began moving around chatting to other runners.  Once I had checked my bag and taken a quick photo with all the Solemates running the marathon, it was time to head to the start line and run a race. 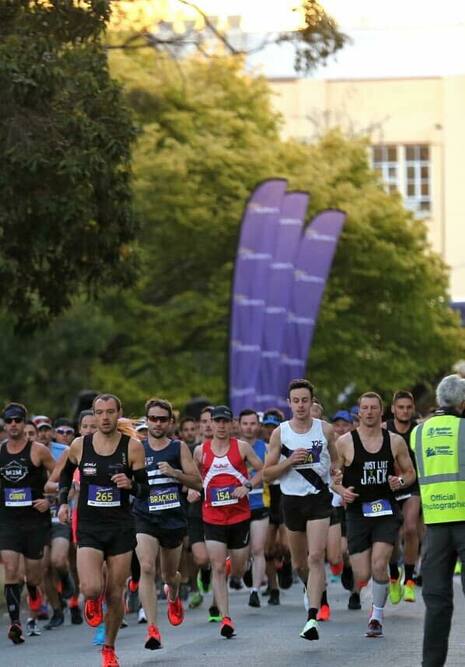 ​As always, I indulged my adrenaline and took off at a quickish pace when the gun went, knowing I would slow a little and settle into my target race pace after a few kilometres.  Almost straight away, we took a hard right and started a couple of laps of Cadbury Estate.  The streets were quiet, with little sound other than the slapping of feet against the ground and the distant sounds of cheers from the race precinct as runners passed at the end of each lap.

At the end of the second lap I knew I had got too far forward in the field so I decided it was time to slow slightly and drop into my target speed- or it would have been if I wasn’t about to hit the long downhill section past the remnants of Claremont Primary School.
Not wanting to share the same fate as fish in the Murray-Darling, I did slow a little once I was back on the flat; and then slowed further as we hit the hill up towards the Brooker Highway.

A fairly well-held piece of race wisdom is that you don’t try anything new on race day, but I’ve never claimed to be especially wise so I was testing out a few tweaks to both my race plan and my nutrition for this race.  I wanted to try to really preload with energy in the first half of the race so I started munching on an energy bar as we cut left into a little detour through Windermere Primary School.
​
I was feeling pretty good as I crested the hill, getting some words of encouragement from #mypresident as I turned on to the highway.  The next few kilometres flew by as a series of gentle descents and easy flat sections so I let my speed creep up a little in recognition that I would be slower coming back this way.

After another small climb, I was passing Montrose Bay High School, and even running at decent pace it would have been hard not to take moment to appreciate the beauty of the moment.  For the moment I was separated from the rest of the field, with those ahead of me almost out of sight and those behind too far back to hear.  Straight ahead of me, rising sun was still low in the sky and casting out golden light across the rippled waters of the Derwent to my left. 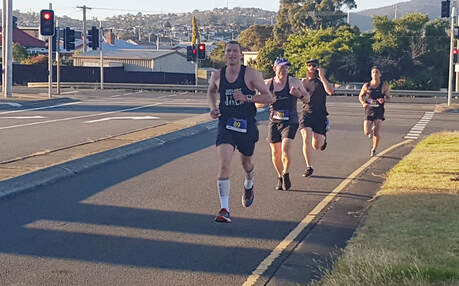 ​I became aware the sounds of pursuit as I got closer to the Derwent Entertainment Centre and by the time I turned left off the Highway, I could tell there were a few runners close behind.  Having run the first section of the race on my own for the most part, I was pretty ready for some company, so I tucked in with the trio of runners as they caught me and kept pace.

I grabbed another drink outside Dowsings Point Barracks and then lent into the surprisingly big climb up onto the Bowen Bridge.   My body was still feeling fantastic, but at this stage of a race, my body is about as trustworthy as an unsolicited text message from Clive Palmer so I tried to ignore it (also like what I do with Clive Palmer).

​Crossing the bridge early in the morning was another scenic moment.  The water below was bright in the sunlight and Mt Direction loomed gracefully above us as we crossed to the eastern side of the river.  We turned and began making our way back towards the start to complete our first lap.  As we re-crossed the river I kept my eyes open and got plenty of waves and calls of encouragement from friends coming the other way in both the half and full events. 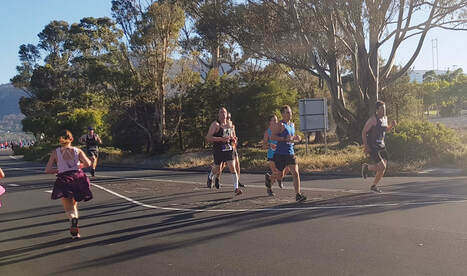 The little group of four I had been part of had been joined by another six or seven runners as we re-crossed the bridge and for a while this larger pack stayed together.   But like the federal Liberal Party, it was only a matter of time before we lost our unity again; and soon enough we began to split up, with most of the group pushing ahead.  I would have liked to try to keep up, but I was sure it was too fast for me to sustain for the rest of the race.  A few other runners obviously had similar ideas and dropped off even further than I wanted to.

As a result, ​I ended up getting myself a bit isolated, and just as I hit the difficult climbing sections between MONA and Cadbury, too.  Without a group to pull me along I had to drive myself, but that wasn’t the first time that has happened so I kept my self-talk positive as I leaned into the hills and watched the runners ahead of me drift further and further away.

I turned around for the end of the first lap still feeling pretty good and a little quicker than the last time I ran this race.  After running the previous few kilometres on my own, I joined up with another runner on the hill to the highway.  We were soon joined by a third runner and the three of us ran together for the next four or five kilometres.  Climbing the hill to the bridge was harder the second time and the guys I’d been running with left me quicker than National Party senators leave their wives.  Even so, I was feeling pretty confident I would be able to come home without losing too much speed as I turned around the final marker. 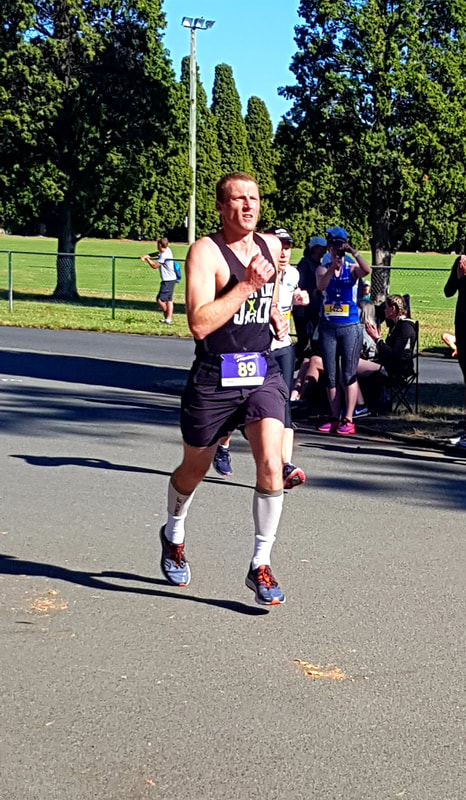 Unfortunately life got a bit harder.  Last year on the Gold Coast I got to experience the misery of really blowing up when you mess up your race plan, but that didn’t happen today.  I just wasn’t running nearly as easily as I had been only ten minutes earlier.  Aside from being generally tired, I couldn’t put my finger on exactly what was wrong.  I popped a couple of salt tablets even though I knew the problem was more than just dehydration.  I figured it might help a bit and certainly wouldn't hurt (much like pill-testing at festivals without the added bonus of saving lives).   Mentally I accepted I would probably need to run about ten seconds slower than I had hoped to run the last section, but even with a revised target speed, I was having to push really hard and find extra bursts of strength to stop my speed blowing out further.

I’ve run a few marathons now, but it always takes until I get to the 36km mark to remember just how unpleasant they can be and at this point in every race I’m contemplating my retirement from running.  Back on the Brooker Highway for the final time, I knew I was going to have to battle if I didn’t want my time to blow out like the NBN budget.  Having run solo for the last 15 minutes or so, I was super grateful when Glen rocked up to give me some company and encouragement.

I drove myself up the little inclines of the Brooker Highway.  With every kilometre I suspected I could feel my target time slipping away like Karl Stefanovic’s career, but I’d put in too much effort to give up so I kept pushing for an extra bit of speed.  With about two kilometres to go, I began my final sustained “sprint” towards the finish.  I turned off the highway and leaned forwards as I threw myself down the hill.  Making the most of my momentum from the hill, I “raced” along the flat section before hitting Cadbury Hill with every bit of energy I had left.

The climb was every bit as hard as I expected, but almost as hard was the final straight, which seems to bend the laws of physics the way it makes a seemingly short distance go for such a long way.  I got a fantastic welcome of cheers, especially from Solemates’ Corner as I ran for the line.  My final time wasn’t a PB (go here for all results) and I was a little underwhelmed after feeling like I was on track for much of the race, but compared to the joy of having my wife and daughter waiting for me at the end and the relief of being able to rest some blistered feet, I wasn’t going to be too disappointed.  A consequence of setting unapologetically ambitious goals for myself is that sometimes I’ll have days like today where I don’t quite get there, but that just makes it more meaningful when everything does go to plan like it did in Sydney last year.  ​

As always, Richard Welsh from Epic Events and Marketing did a fantastic job organising a very well-run event.  Congratulations to everyone who participated in the event and thanks to everyone who volunteered to make it such as a success.  Thanks also to everyone who reached out with encouragement before, during and after the run.

Time to recover and start training for my next race.
Powered by