After a day at work, the ride home is a pretty good way to reflect on the day’s events and then to clear my head and think about other things. 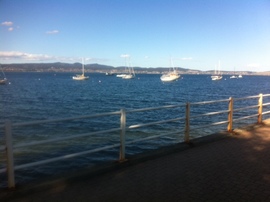 One of the hardest parts of the ride is getting out of the car park and immediately crossing Campbell Street to get to the side with the bike lane, which I can use for the couple of blocks it exists for.  Then I have to cross to the other side of the street again once I get further into town.  Even chickens are asking why I keep crossing the road at this point.
The bottom end of Campbell Street is busier than Melbourne Storm bookkeepers, so as a cyclist you have to be pretty comfortable around traffic to go this way.  Apart from the traffic and the lights, it is pretty easy riding and it is not long until I’m passing St David’s Park and on my way out of the city.  My usual plan is to stop at the gym on the way home to do my leg exercises, but this plan usually has a shorter follow though than a Federer drop shot, so I normally find myself out of town quite quickly and promising I'll make up for skipping the gym when I get home.
The ride through Sandy Bay is pretty cruisey.  There are no actual cycle lanes for the early part, but I almost prefer that to some of the tiny lanes that are sometimes constructed that are filled by parked cars.  Traffic starts to move a little more freely and the river views return in full as I pass the casino. 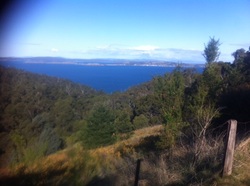 After passing the always-busy Lipscombe Larder, the picturesque Sandown Park appears on my left, framed by huge trees.  Also known as the “Tropicana Cauldron,” this ground has been a scene for many great victories and defeats over the last two decades.   I’m struck by a temporary bout of jealousy as I begin to climb away from Nutgrove Beach and see so many people in the water or sunning themselves nearby.  But that envy lasts for about as long as any fleeting compassionate thought lasts in Eric Abetz's head , replaced by anticipation as I make my way closer to home.
Another small climb begins as I pass Truganini Track, but the discomfort is offset by the scenery and it flattens out soon after.  I take the chance to slow down a little and drop a gear or two to get some energy back.  After another few kilometres, I am passing my old high school and I marvel again at how blessed I was to go to a school that sat closer to the water than the COALition is to the coal industry.  I still remember classes where the teaching stopped completely if someone looked out the window and saw a pod of whales or dolphins.
It isn’t long after passing my school that I’m passing a street I used to live on, and that is where the climbing starts.  It's gradual, but punishing enough that I usually change into the smaller cog of gears pretty early.  I have tried to make it all the way to the top in the bigger set of gears, but usually end up feeling almost as sick as when I heard the editor of the Australian was allowed into Nauru to take photos and interview a rape victim against her wishes (all jokes aside, that is pretty horrendous).  After a few more minutes or so of winding my way uphill, I pass the Shot Tower, which is a good checkpoint.  From here it is less than a kilometre to the top.
I often see people resting at the top, and while it is quite a pleasant spot, but I am happy to be on my way and rest on the downhill run.  There is a nice long straight section soon after the top that I either take easy or push to see how fast I can go.  To the left of this straight is a picturesque V-shaped valley leading down to the Derwent that provides a lovely view as you ride by.  Of course riding in excess of 50km/h on tyres that are as wide as a ten cent piece, you don’t spend a lot of time watching the scenery, but it still gives me a smile as I go past.
I have been told I don’t need to use my brakes on the way down the hill but I haven’t quite graduated to this level of mastery on my bike.  As I said earlier, I’m about as good a cyclist as Joe Hockey was a treasurer (but hopefully better than he is as a cyclist)
In a matter of minutes I have reached the bottom of the hill and I turn into beach road.  Being a little out of condition at the moment, my legs tend to be pretty heavy by this stage of the ride so I go pretty slow on my way out to the beach.  Even after many years living in the area, I am always struck by the beach’s beauty as I turn off and roll the final distance to my house.
I have said elsewhere that I love Tasmania because there is so many great aspects that are just a short drive away, but sometimes that isn’t even required, as the wondrous scenery is literally on your doorstep.
Powered by