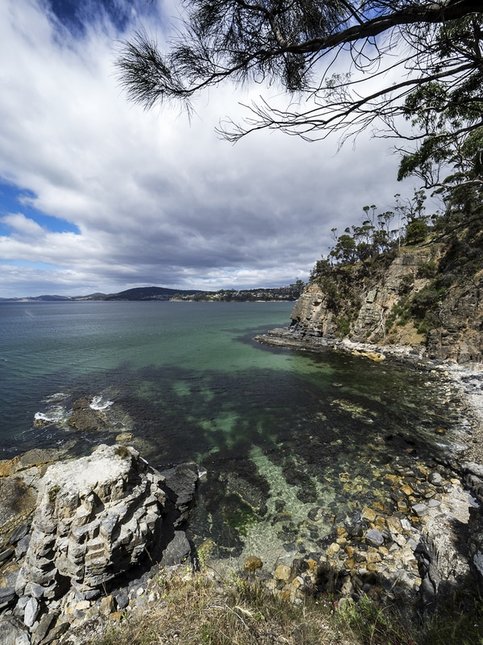 ​There are so many great walks in Tasmanian but the Alum Cliffs is probably my go-to walk or run if I have an hour free and want to get outside.  Situated at the northern end of Kingston Beach, it is a scenic 90 minute return walk that passes a number of excellent vantage points for viewing the cliffs themselves, the river and the eastern shore along the way.

I had actually planned to go down to the peninsula for a walk this particular week.  I think this is one of the most beautiful parts of Tasmania, especially Cape Raoul.  Unfortunately I rolled an ankle early in the week, and seeing it swell up like opposition to Trump’s travel ban, I was quite concerned about it; especially given that I would be running the Cadbury marathon a few days later.

But I had to start walking around and testing out my mobility and my dad was free, so we decided to go for a shorter walk around the Alum Cliffs.  We began at a relaxed pace, crossing Brown’s River and winding our way up the narrow path that turned back and forth as whimsically as Sussan Ley buys million dollar properties.  Halfway up, the track stopped climbing and turned to the right, undulating and winding gently around the side of the larger hill.  This is a particularly pleasant part of the walk, with little gradient on the track and plenty of shade from the foliage above us.  The land drops away very sharply to the right of the track and tall eucalypts grow up from below giving us a feeling of walking amongst the higher reaches of the trees.  Looking out through the rising trees the deep waters of Derwent River were a dark blue with flashes of silvery grey from the sun’s reflection.

After five or ten minutes, we had reached the beginning of the cliffs proper, where the track crossed an open headland.  To our left, the hill sloped further up for over a hundred metres of green fields, while to the right the cliffs stood perhaps 20 metres above the water.  Below us at the water’s edge a loose pebble beach and some stone ledges could also be seen, with gentle waves washing up to the otherwise undisturbed beach   ​
While much of the slopes are fairly gentle (except for the end but I’ll tell you about that later) there aren’t many flat sections of track along the cliff (in fact it is arguably as uneven as funding between public and private education).  So once we had got to the top of the rise we were soon gradually descending again on a path that cut in away from the water following the contours of another narrow creekline.  There was a noticeable change to our surroundings as we dropped further into the valley.  Whilst we were on top of the cliffs, it was pretty light and- being the middle of summer- very dry, with enough concentrated brown and yellow to make you think you were in the Hawthorn cheer squad (minus the barely intelligible over confident predictions about the coming season), but in the creekline it was damper, cooler, greener and even darker, while the straight narrow gums that lined much of the cliff track were replaced by a range of ferns and mossy logs.

​We crossed a small bridge and began making our way back out the other side and rejoining the cliff top track.  We passed another lookout with a well-placed bench, before dropping down into a third valley that was shadier than the Trump dossier about Russian escorts.  As we climbed back towards the next rise, we began to see the odd property through the trees and not long after passed a laneway that connects the track back to the Channel Highway.  There is a small shelter with a picnic table near another viewing point soon after this and we were warmly greeted by a group of walkers who were taking a break there as we passed. 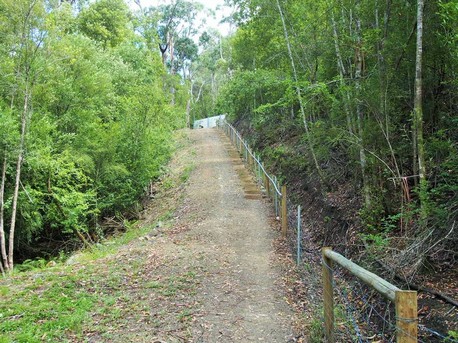 Where the rest of the track uses zigzagging and contouring to avoid steep gradients, the last 400 metres or so seems to go forgo this strategy in favour of a more direct approach to going up and down hills.  Dropping into a final valley, we descended maybe 50 metres at a pitch of around 30 degrees.  Hitting the bottom, we immediately began to climb an arguably even steeper hill back up the other side.  I was a bit worried about the loose gravel under our feet, but the footing was actually better than it looked.

​Trudging carefully up the gravelly path I could see what looked to be the top less than 100 metres further up.  Unfortunately this is almost as cruel a lie as the one about populist manipulators like Pauline Hanson and Donald Trump standing up for poor and working class families.  Just as Hanson and Trump actually betray the people who trust them to line their own pockets, the path betrayed me by turning sharply to the right and continuing on for a similar distance of climbing finally finishing beneath the historic Hobart Shot Tower.

​I had an apple in my bag (I also had a pen, but having both a pen and apple gave me no urge to sing or dance- take note internet) so I munched on that on the way back down the hill.  It was a pretty relaxed pace, with plenty of stops to take photos or just look out at the cliffs and the water, so my ankle was holding up fine. 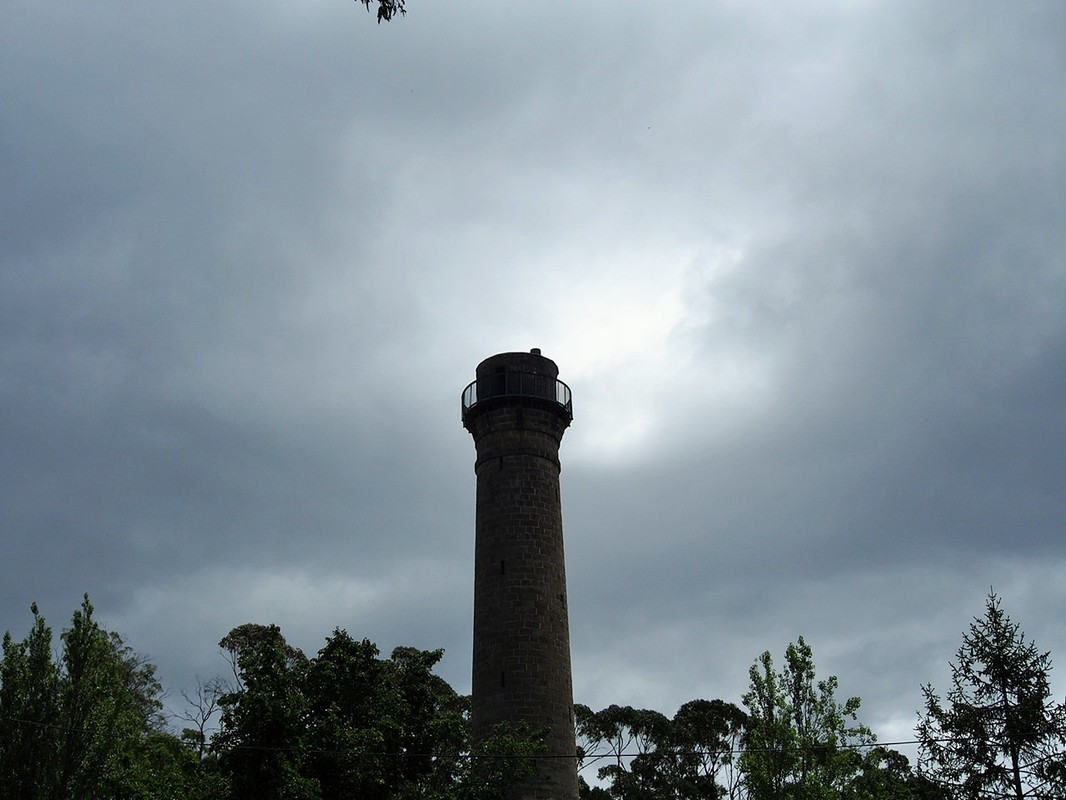 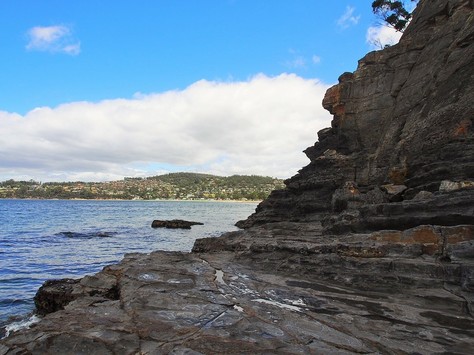 We decided to take a different route on the way back, cutting left after the stick shelter and following some disused tracks down along the cliff edges (I had better add here that I would advise staying on the main track or at least taking extreme care if you choose to go off the track in this area).  We wended our way slowly through the trees following a faint path that was as unrefined as the One Nation candidate selection process (seriously the only criteria seem to be that you must have radical beliefs that you will refuse to relinquish no matter what scientific or historical evidence is presented to you).
​
We took a steep, slippery descent down to some rock ledges near the waterline.  We had a bit of a look around, while we were there watching the gentle swell roll in.  We had come out quite close to the headland we had been taking photos from earlier.  We actually could have rejoined the main cliff track, but much like Chelsea Manning’s jail term we took a short cut (although not quite with the same relief as Manning, I’m sure).
Powered by