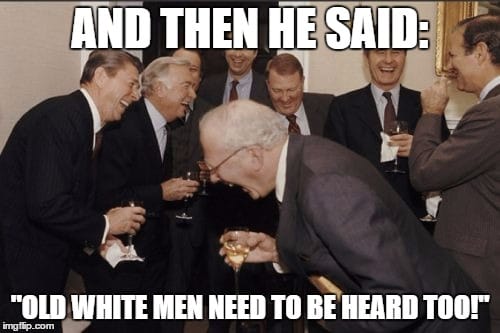 It has been a pretty busy couple of weeks leading up to Christmas and I was going to leave off the overt political commentary for a while, but since Peter Dutton and Steve Price aren’t going to, it would be remiss of me to stop correcting their ignorance.

The odious Peter Dutton’s disingenuous call for Australians to rise up and fight for a Christmas that was never under threat was disgustingly cynical, even for a man as morally decrepit as he.  Unfortunately for our reptilian Minister for Immigration, his attempt to politicise a major holiday celebration came across as pretty transparent and was widely criticised, so I won’t repeat what others have written.

But my attention was caught by the headline that Steve Price felt that “Old white men need to be heard too.”  Now ignoring my disappointment that this was even considered worthy of being a headline- as I have said elsewhere there are far better spokesmen for conservative politics than Price- I just couldn’t let these comments go without a response.

But let’s consider these words as if they didn’t come from a belligerent alt-right cheerleader like Price.  What if someone I respected said the same thing?
First of all, there is a point that Price almost misses in his delivery, and one that could largely be ignored by progressive responses to his latest idiocy.  There are many in our society who justifiably feel increasingly marginalised and disempowered as a result of the ongoing process of globalisation.  And you don’t need to be part of a disadvantaged minority to find life difficult or to feel that society’s odds are stacked against you.  White males and their families are a segment of this group of battlers who are struggling with increasing unemployment and underemployment (anyone still want to tell me the Coalition is better at handling the economy?), rising house prices, the predatory gambling industry and continued cuts to services and welfare.

Quite fairly, many people in these circumstances feel their concerns are not important to a political class that seems far more concerned about pleasing its political donors.  Many will also feel that their struggle is not given the same status or sympathy as that of recognised minority groups and that their immediate problems are a greater concern than climate change or the ASX.  The resentment of feeling like an ‘invisible minority’ is dangerous because it can be channelled by nativist politicians as evidenced by Brexit and Donald Trump (and Adolph Hitler for that matter).  So in amidst Price’s bristling self-entitlement there is a kernel of truth.  The disenfranchisement of the poor needs to be addressed and if were to be addressed through engagement and inclusive policies without the cynical scaremongering our politicians lazily resort to, we would probably have less idiots like Malcolm Roberts elected and a better functioning democracy.

But Price isn’t actually concerned about that, since appealing to people’s resentment seems to be part of his business model.  Sounding a bit like George Brandis defending people’s right to be bigots, the shock jock argued that the views of older white men deserved greater prominence in Australian society, suggesting that thanks to 'lefties' you had to be a feminist or member of the LGBTI community to be taken seriously.

Is he for real?  The only time LBTI advocates are heard from is on LGBTI issues such as marriage equality (and then the old white men in government still ignore them), whereas old white men are heard all the time.   They hold the majority of positions of power in government, the public service, the media and major corporations.  You see them interviewed in positions of assumed expertise and status every day.  Even more than they are heard, their actions are felt for it is they that hold the positions of power and whose decisions affect thousands of less fortunate Australians.

Sadly for the disenfranchised Anglo Saxon, the old white men whose words and actions take such precedence in our world do little to help them.  The cost-cutting, tax evasion, property speculation and use of offshore labour that our elite make regular use of are part of the reason there is such inequality and resentment within Australian society.

Old white men are heard alright.  The fact that Price’s statement was newsworthy makes it pretty much self-contradictory to begin with.  And I can’t go a day without hearing complaints on social media that being a white man isn’t quite as advantageous as it used to be.  Being heard isn’t your problem Steve, nor is being taken seriously.  Your problem is that when you are taken seriously, people think about what you are saying and you are being heard for what you are, so many of us react with appropriate disdain.

This isn’t to say we can’t be tolerant of conflicting opinions in public debate (although if Price is calling for this, that is a level of extreme hypocrisy few people even attempt), so I agree with the premise that people shouldn’t be judged and condemned for holding outdated conservative views.  For some people it takes time and, as I said earlier constructive engagement, for those views to shift.  We don’t change their mind by ostracising them from the conversation or ridiculing them.  However when their views lead to behaviour that affects others unfairly, then people are open to justifiable criticism.

Steve, when you start presenting evidence that old white men are disproportionately represented in mortality statistics, incarceration rates or unemployment statistics, then I will be every bit as sympathetic as I am to the plight of other disadvantaged groups; but if you just complain that your conservative throwback opinions are not being given the same uncritical respect they once enjoyed in the good old days when you were more free to racially and sexually vilify minorities, you will continue to be heard and mocked for your bigotry.  You won’t get the respect you crave from those of us who take you seriously enough to consider your claims through a critical lens.
related post- what about me?
home
Powered by