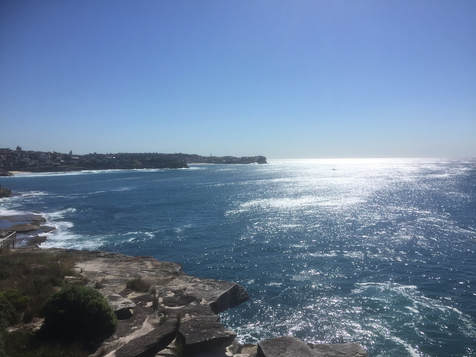 I make no secret of how lucky I feel to live on this wonderful island, but that doesn’t mean I don’t have a great time when I do get out of the state for a few days, especially when I’m travelling with great people.

I finished work on Thursday and frantically headed home to make sure I had everything ready.  After double checking my bags as carefully as Australian politicians are re-checking their citizenship status, I headed to the airport, where I met up with Kristy.  We chatted for a little while and in no time it was time to board.  I fell asleep soon after take-off and woke up conveniently (so I thought) just before we were meant to land.  Unfortunately due to strong winds creating delays at Sydney airport we had to stay aloft and do more circle work above Sydney than a bogan in his mum’s Gemini.

Eventually we landed and my Uncle John was kind enough to pick me up.  It was pretty late by the time we got back to his house, but not too late for some of Aunt Rosie’s homemade cake and a lovely time catching up with family.  After a second slice of cake that probably wasn’t in the pre-race diet plan (thankfully Michelle Bridges wasn’t around to accuse me of being morbidly obese and unhappy), I finally took myself off to bed.  It was a later night than I would normally have this close to a race, but I had reduced any ill-affects as best I could by taking my cues from Die Hard and taking off my shoes and making fists with my toes.

​The next morning after attempting cartwheels (fairly unsuccessfully I should add) with my nephew Leo, it was time to go for an acclimatisation run along the cliffs north of Coogee.  It was a nice morning with the sun shining brightly and a steady breeze.  After grabbing some lunch I met up with my friend, Porter, who I was staying with for the night.  We dropped my bag at his flat and went for a wander through Hyde Park and past the War Memorial, eventually heading for a counter meal at a quiet pub.  We were met by the talented Miss Morrisby and after I had overcome my choice anxiety with the menu, I was able to order and enjoy a great dinner. 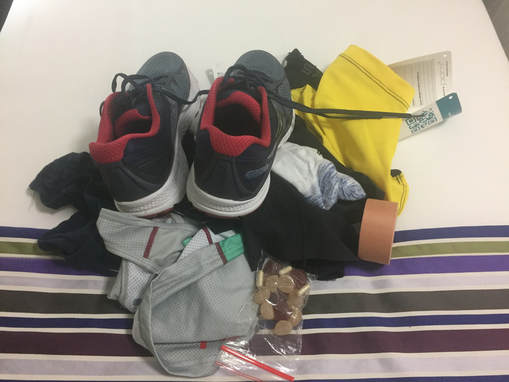 After dinner, we headed back to Porter’s place and watched the footy (apologies that there haven’t been many footy reports this year but I’ve been a bit flat out), which got kind of loud as Porter is a Cats’ supporter and they put in one of the better efforts I have seen from that team in some time to beat the Swans.

The next day I was up and about early, eager to meet the rest of the gang, who were flying that morning for the following day’s marathon.  We wandered down to the expo at Town Hall, which was a bustle of excitement and energy and we eventually surfaced with correct race numbers and so on (but not without more mix-ups and misunderstandings than a Jennifer Aniston movie.  We found a nice cafe for lunch then headed up to the hotel to unpack bags and start getting set up for the next day’s race.

Getting ready actually meant nap time for some of the older members of the group, while I was firing off messages quicker than a Trump twitter storm replying to the flood of well wishes I had been receiving throughout the day (thanks again everyone- you rock).

After another walk into town, I decided it was time to check out the rooftop pool, which was a pretty great set up.  The water was very mild but the chilling wind had me cooling quicker than global demand for fossil fuel technology, so I spent most of the time under the water, before deciding it was time for more food.

​Following on from the Solemates prerace ritual established in Melbourne last year, we ordered pizzas for dinner and ate them in the room before everyone began their final race prep.  Bouch and Courto had been to the closest bottle shop, but had been told they were right out of Kraken spiced rum.  I wanted to reply, “Well the jerk store just called and they’re right out of you,” but not being sure how many Seinfeld fans were in the room, I kept that George Costanza moment to myself and continued with my last minute preparations.  I'm told it's a tradition to take a photo of your gear the night before a race so I did that, but I don’t really know what all the fuss is about. ​ 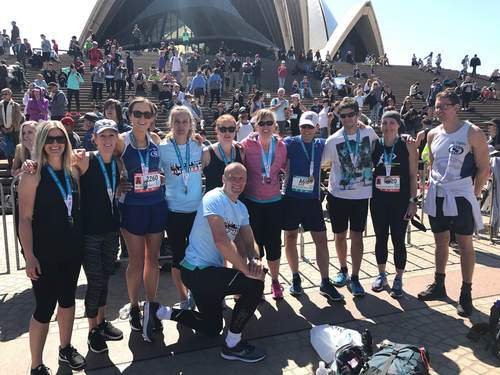 I wasn’t surprised to be awake early and up before 4AM, keen to start getting ready.  I didn’t want to make the same mistake as James Comey, so I taped everything meticulously, before getting stuck into a solid breakfast.  Soon enough it was time to leave.  Gabby, Simon, Lewinski and I walked through the quiet streets of Sydney.  The eerie hush was in total contrast to my excitement and adrenalin, which were growing inside me us unstoppably as Australian carbon emissions.

We arrived just before the start of the half marathon, so quickly went up onto the Harbour Bridge and picked a spot we would be able to see our friends and cheer for them as they ran past.  Well that was the intent, but with the thousands of people running past us at speed, it was harder than I expected.  Even waving the massive Solemates flag, we only caught half of the people we were trying to spot in the fast moving crowd.  Soon enough it was time to head down to the start line for our own race, which is a whole separate story itself.

​Afterwards, we hung around the opera house and enjoyed the atmosphere as we watched others finishing their own races.  Once we had all crossed the line, we walked slowly (really, really slowly- thanks Bouch) back to the hotel where Courto, Lewinski and myself did a recovery swim before we headed out for lunch. ​ 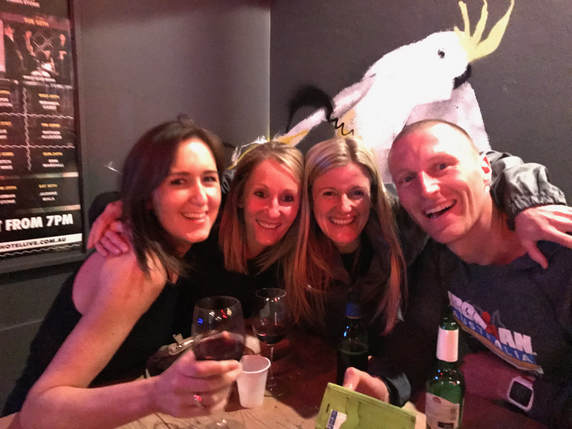 Unfortunately, we somehow lost Mumma Bear on the way into town.  Losing people is always a difficult experience (unless you work in the Trump administration where it seems to be a weekly occurrence so I assume you get used to it) and we were all relieved (and a little bit frightened) when a raging Mumma Bear was finally found.  Thankfully a cheeseburger and couple of espresso martinis did wonders for Mumma Bear’s temper and all was well again quicker than David De Garis will no doubt be forgiven by the Liberal Party and gifted another cushy appointment.

Lunch became a long lunch and long lunch became dinner at a bar in Darling Harbour, but eventually the party moved its way back to the apartment where Lewinski and Kaylee treated us to one of the most enthusiastic but one-sided rap battles in history- seriously, forget about the David and Goliath analogy, this was nearly as unfair as when Malcolm Roberts tries to argue science with scientists.  Eventually it was time to call it a night, except Lewinski who decided he needed food so he headed to the girls’ room roaring, “Where’s the food?” 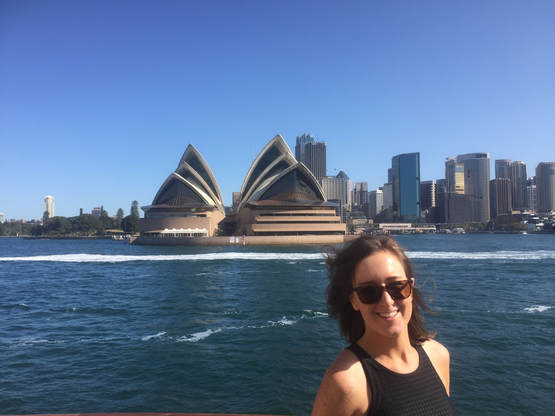 Our final day in Sydney was a much slower start than the previous one, but I still woke up at 5 feeling pretty terrible- just not in the legs.  Packing up from the previous night’s carnage was thankfully an easier task than repairing the damage Turnbull did to the NBN; and with Cam showing off his advanced parental skills we were eventually checked out and heading down to Circular Quay.

The ferry to Manly was a beautiful trip.  Not too long for me to get bored, but amazing scenery in every direction.  Soon enough we disembarked and walked across to the ocean side of Manly where we stopped at a café for my third or fourth breakfast of the morning.  It was a clear sunny day, but the wind was ripping through like the Abbott Government gutting public services.

We headed south along the beach and eventually got to a protected cove where we spent the majority of the afternoon swimming and enjoying the warmth.  At length it was time to head back on the ferry grab our bags and head to the airport.  I had a moment of concern going through security as something in my bag aroused suspicion.  Knowing I had my iPod headphones in the bag and remembering how well that worked out for Cassie Sainsbury, I was obviously nervous, but thankfully it had just been the finisher’s medal that had drawn attention.

​We were grabbing some food in the food court when everyone’s phone’s started going off with people back home being worried about reported strong winds that might delay us.  Luckily our pilot had obviously been watching Sully and wasn’t going to be scared by a bit of weather, so we set off without delay.  I landed home a few hours later, grateful to so many people for an enjoyable inspiring and triumphant weekend. 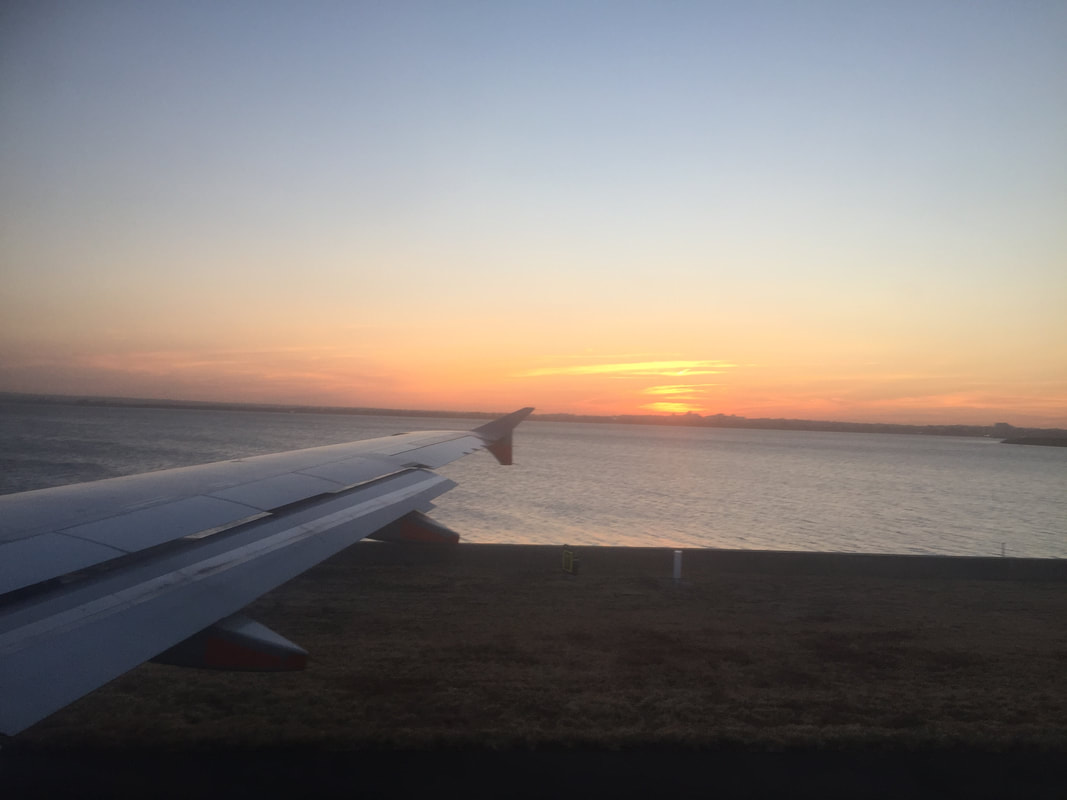