A walk that doesn’t start with a fry-up at my dad’s is less of a walk.  As I gorged myself on more meat than most people eat for Christmas lunch, we discussed our planned walk.  We had originally intended to go to Mt Brown, after my friend Elaine had shown me some great photos she had taken there, but my dad had realised the tides would be perfect for getting close to the water at the iconic Shipstern’s Bluff.  That argument was as irrefutable as the fact that the continued abuse in our offshore detention centres is unconscionable, so destination Mt Brown was off the table quicker than the Miss Universe crown from Miss Colombia’s head. 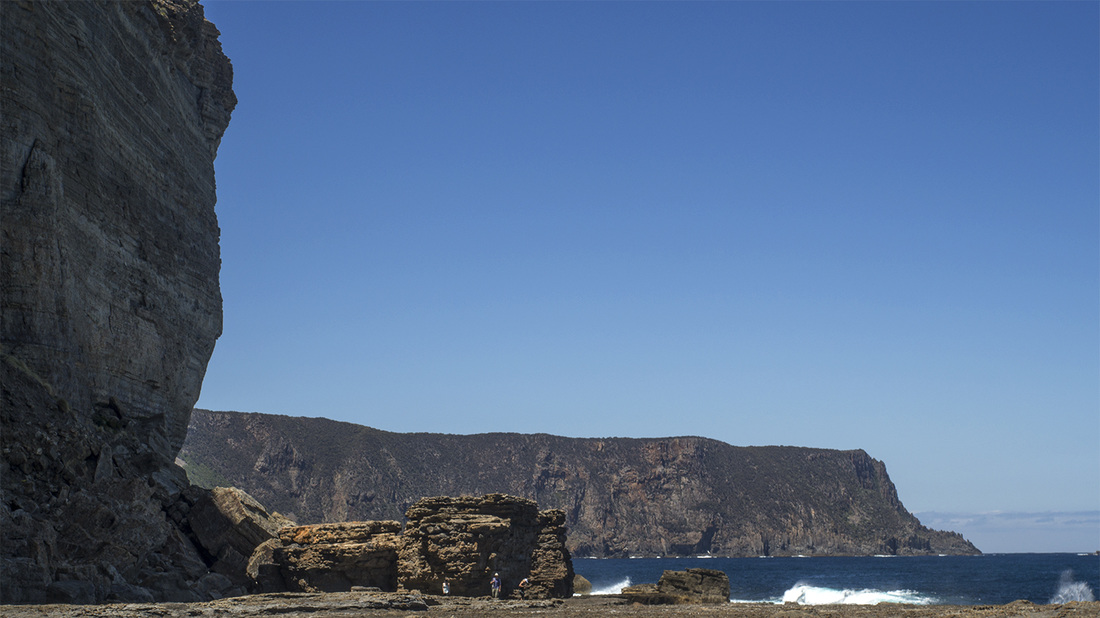 Walking to the first lookout

We pulled up at the car park and got started on the walk with as little hesitation as the French government bombing Syria.  There was a walker sign in book, but we paid it as much heed as billion dollar companies pay tax in Australia.
The first part of the walk follows the same trail as the walk to Cape Raoul, which I have described previously, but after about 15 minutes there is a junction and we took the track that led to the right.  From there, the track continues on through the gently undulating forest.  It was quiet and still, but looking at the way all of the gums leant away from the coast, you could tell the wind often ripped through here like an end of season footy trip going through a quiet town.
The sounds of wind and distant surf gradually filtered through the sun-dappled forest and half an hour after reaching the junction, we had our first look at the foamy water crashing against Shipstern’s Bluff.  We followed the track for another 20 metres or so, until it opened into a clear lookout where we stopped for morning tea and Dad took a few photos.  It was a terrific view of the coastal cliffs, with a hazy distant horizon and the white sail of a single yacht breaking the enormity of the blue sea.   Despite hearing the waves easily, we were still more distant than, so we knew the majority of the walk was still ahead.  After a little while watching the waves, we heard disembodied vices floating up to us from further down the track.  I waited curiously to see if anyone would appear, but no one did and soon the voices stopped again. 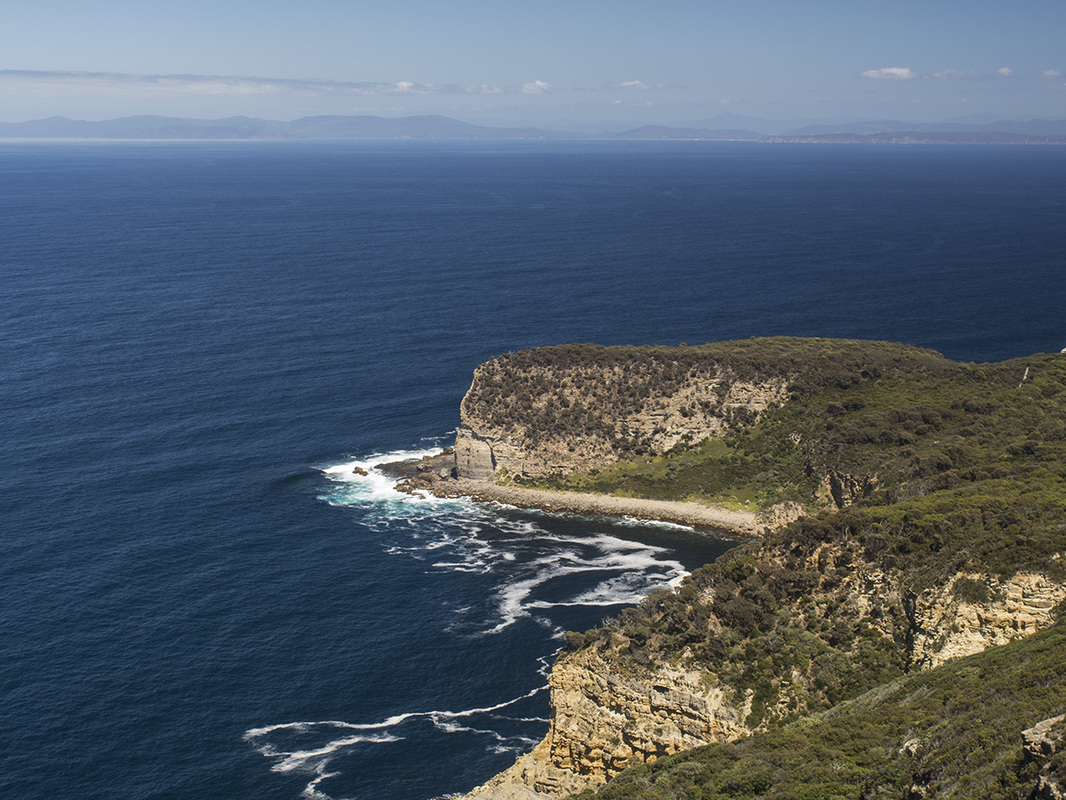 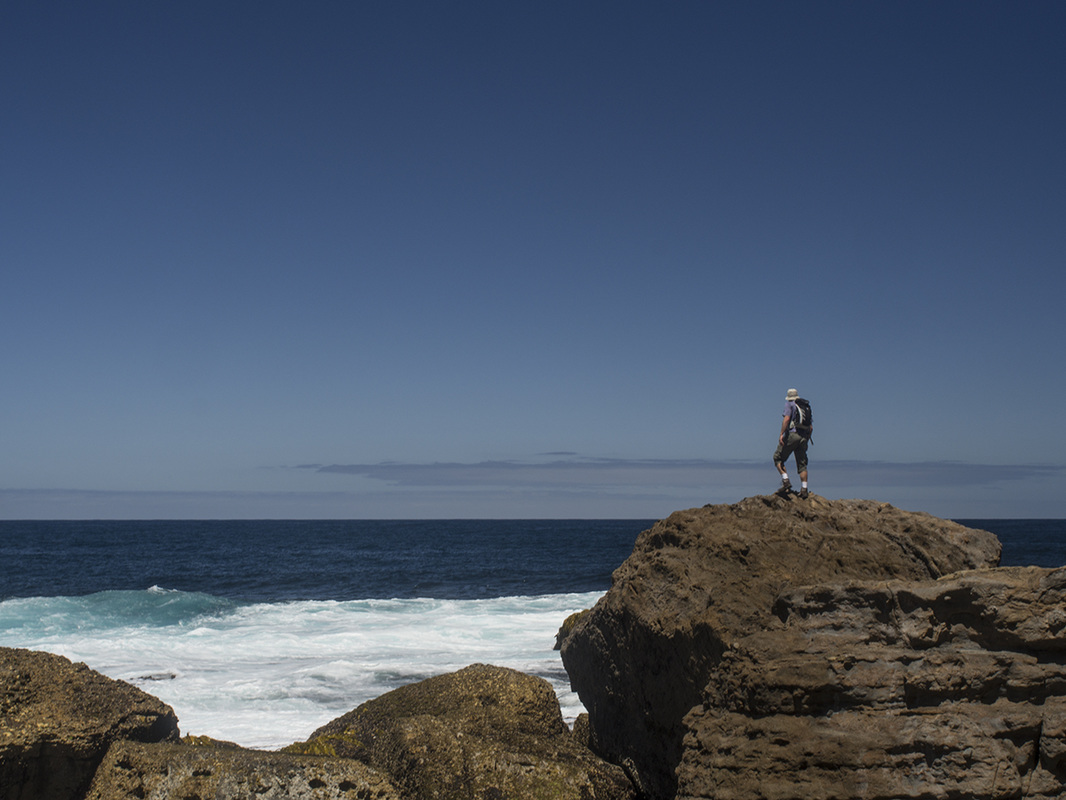 The delightful Nat and Lauren had been walking a little ahead of us for the whole time, but had only been audible when the gyrations of the track had brought us especially close (kind of like all that mumbo jumbo about the Convergence in Thor the Dark World.  Well, sort of).    From the stony beach, looking back towards the lookout and the cliffs either side was impressive, with a view all the way to a distant Cape Raoul, but the real highlight was to our right where a stone platform extended out to meet the sea.
The platform was a vast flat ledge with occasional boulders scattered around and a sheer, patterned cliff rising above it.  The boom of the surf was loud, as heavy waves continued to smash against its edge, sometimes sending sprays of white water metres into the air.  I sat on top of rock looking out at the sea and chatting to Nat for quite a while, as my dad moved around the ledge taking photos.  I have only included a few of the shots he took.  For a more complete picture of what we saw down there, keep an eye on his Flickr page.  I could have stayed on that rock for some time longer, as every direction I looked was an incredible sensory experience, but there was too much else to see, so I reluctantly climbed down after a while and explored the rest of the ledge.
At the far end, we came to a narrow impassable inlet between the cliffs where the waves rebounded against each other in an angry turbid mass.  A deep roar echoed up from the entrance to a water-level chamber that extended back beyond our vision.  A part of my brain was deeply attracted to the idea of getting in the choppy water to feel the primal power of the current, but realising this was a risky as going out for a Chinese dinner with Dustin Martin, I was never really tempted. 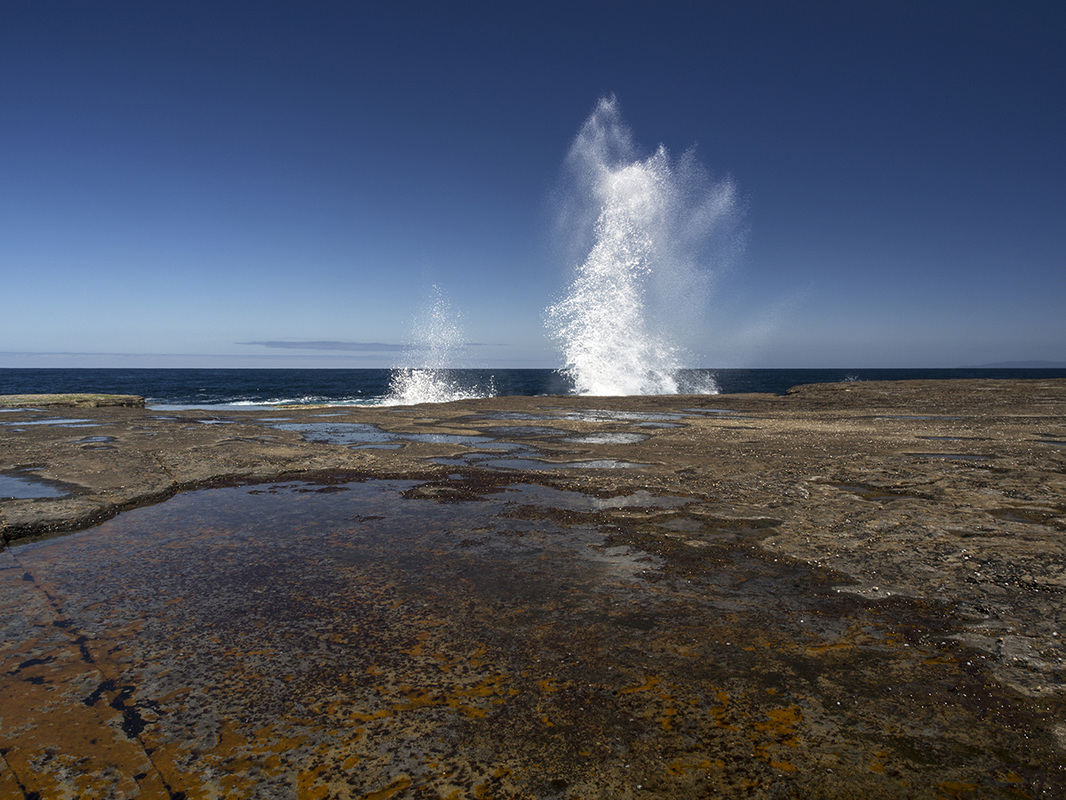 Once again, we simply had to stop here for a while until I felt I had crystallised a mental image of what I was seeing.  But eventually we have to move on. After scrambling back up the steep part of the track, we were pretty soon back onto the easy flat part.  It wasn’t long before we reached the junction and this time we went the other way towards Tunnel Bay, which was only 15 minutes away.  The narrow bay itself was lovely, with small waves rolling in and high stone cliffs on either side.  Your eye was immediately drawn to the naturally formed tunnels in one cliff that you could see through to the incoming waves beyond.  The main one was at least five metres high and maybe 20 long, but little more than a metre in width for most of the way.  This seemed another spot we would need a little time to absorb, so we stopped here for another snack.

Hiking back to the car