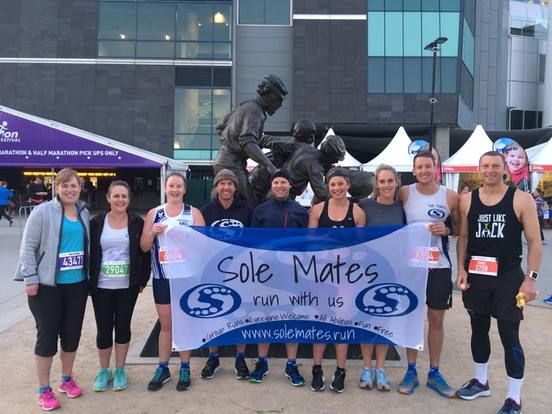 I accepted that my preparation for the Melbourne Marathon had not been ideal, but even with perfect preparation leading up to an event, you can still give a disappointing performance -just ask the Adelaide Crows (too soon?).  Having run a new PB only a month earlier, I was a little cautious in my expectations of how I would run so soon after.  But I was also careful not to talk myself into a bad run either, and left the chance of beating my Sydney time as a distinct possibility.

As usual, the Solemates were out in force before the race and some of us managed to gather for a pre-race photo at the MCG, before heading towards the start line.  The area was teeming with people and the excitement was practically visceral as Gabby, Annie and I wriggled through the crowd to an appropriate starting point for our expected running speed.  The anthem had already played so it was now safe for me to kneel and tie my shoe laces without being confused for Colin Kaepernik (who has every right to kneel for that matter).  I was excited, but hardly nervous and gave Gabby and Annie a last hug for good luck as the final minute ticked down to the race start. 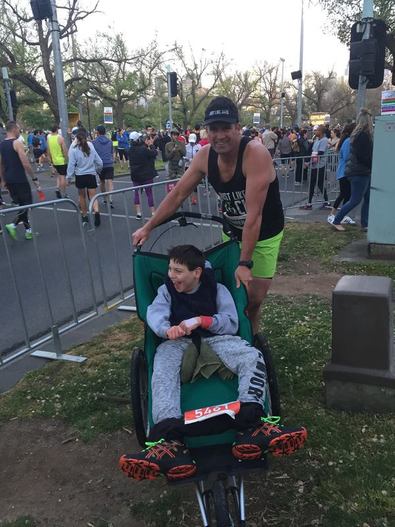 The starter’s gun was followed by a tremendous cheer from the assembled throng and we surged forwards towards the start line.  It was pretty crowded, with runners zigzagging in every direction as they tried to build speed- myself included- without tripping on others.  As a result, I was unexpectedly nudged and prodded over the first 500 metres more often than a Hollywood starlet in a Harvey Weinstein movie.

​The race was tightly packed as we ran past Federation Square and turned left to cross the bridge, but it quickly began to thin out along St Kilda Road, allowing me to run at my target speed.  There were still plenty of runners around me, but we were all running a similar speed by now so it hardly mattered.  I had started pretty close to the pacer I intended to run with, but whilst I had been weaving in traffic the distance between us grew quickly in a physical metaphor of Australia’s wealth divide.  Since I am bothered by inequality, I did what no Coalition government would dream of doing and took deliberate steps to close the gap.

​I continued along St Kilda Road, running slightly above target pace and feeling really good.  After about four kilometres I had almost caught up to the pacer so began to drop pace fractionally.  I had promised my Race Mum, Aimee, that I would fuel better on this run so I was fastidious about drinking from every aid station and eating every 20 minutes.

By the time we turned down Fitzroy Street and into Albert Park, I was comfortably ensconced with a huge group of runners following our pacer.  When I ran Sydney the previous month, I had left the pace group as readily as Lisa Wilkinson leaving channel 9, but I was determined not to repeat that mistake this time.  There was little in the way of wind so there wasn’t a huge advantage for drafting, but it was easier not having to think about my pace or look at my watch, as I just matched speed with those around me.

​I had a momentary concern around the 8km mark when I noticed some unusual tightness in my left hamstring.  Like South Korean radar operators watching their screens, I monitored it with more than a little concern, but the pain was pretty dull and not getting worse, so I pushed on, hoping that it would be no worse than everything else in my legs in a few hours.  Aside from the tightness, I was feeling pretty strong as we made our way out of Albert Park and turned down Fitzroy Street towards the water.  We had been running for nearly an hour and I had been pretty happy with my water and food intake.  We turned right onto Beaconsfield parade, passing the drummers and an enthusiastic crowd on our way towards Port Melbourne.

It was a long way to Port Melbourne, too.  Thankfully the wind was still as non-existent as Australia's chance of reaching our Paris emissions target and the direct sunlight had little heat this early in the morning.  It was also a very straight section of the course, with no changes of direction or elevation, allowing us to hold a really steady rhythm for kilometre after kilometre.  It wasn’t that long before we began to see the lead runners heading back past us towards St Kilda- already six or seven kilometres ahead of us.  As I don’t compare myself to professional athletes, I really didn’t mind that I was lagging behind the front runners like Australian internet speeds with the rest of the world (thanks again, Mr Turnbull) but I couldn’t not be impressed by just how quick the frontrunners were moving and how easily they made it look.

At around 18km (I have to admit my memory of distance markers is not exact so treat my numbers with the same suspicion you do Nathan Broad's apology- actually maybe not quite as bad as that) we turned around a bollard and began heading south.  Even though we were going back the way we had come, this was one of my favourite stretches of the run, as it gave me a chance to momentarily share the experience with friends and see how they were going as we passed each other.  I stayed as close as possible to the inside edge of the track, which gave me the best chance of seeing friends coming the other way and was able to share a smile, a wave or a word of encouragement with six or seven friends as we passed each other.   We followed the water back past Fitzroy Street and continued further south into St Kilda itself.  The pace group kept its cohesion well, with very few runners showing any intention of breaking away (or doing a Catalonia) at this point.  There was a bit of chatter within the group, as we tried to keep ourselves occupied, but this was interspersed between large periods of quiet.

We turned for home at the bottom end of St Kilda and I immediately felt the boost of confidence that comes from knowing that I was heading back.  When I had run this course last year, this had been the point of the strongest headwind, but it remained remarkably still as we made our way back towards Fitzroy Street.
We turned away from the water and climbed the gentle hill towards St Kilda Road.  At our pacer’s urging, we pushed a little harder going uphill and didn’t drop pace at all.  We passed Albert Park where half marathoners were flowing out onto the course like gambling industry donations to political parties.  Suddenly the route was packed with runners once more, but we were able to get through reasonably well by channelling Cory Bernardi and staying on the extreme right. 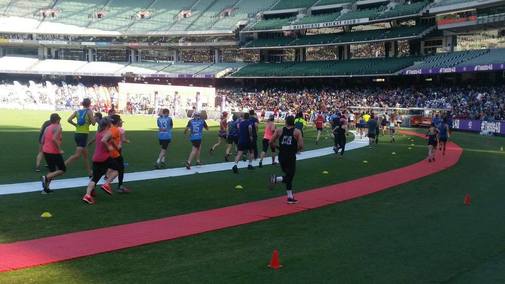 The towering skyscrapers of the CBD beckoned to us from afar as we retraced our steps along St Kilda Road.  Like public disquiet over the Marriage Equality plebiscite, the noise of the crowd got louder and louder the longer the event went on, so that by now, the much appreciated words of encouragement were almost coming constantly from spectators lining the course.

It had gotten hotter and I was sweating like Michaelia Cash being questioned over leaking AFP raids, so I was inviting volunteers at the aid stations to just throw water at me as I ran past to help me cool down.  As we approached the Yarra, we turned left down a curving street into a short tunnel and came out the other side of the road near the Tan.  It was bustling and chaotic as we intermingled with the half-marathoners once more, but I managed to get through that section without losing too much speed or falling over.

Although I had been aware of some fatigue creeping into my legs over the last ten kilometres or so, I was largely feeling good up to about now, but I quickly began to deteriorate as I made my way up the slight incline beside the Tan.  My legs felt as shaky as the Coalition’s majority and my feet- which are often a weak point for me- were getting very painful.

Somehow I managed to almost maintain my speed and slowly move ahead of the pacer who had planned his splits to allow for a slower end to the race for tired runners.  As much I was hurting I was also pretty confident by now that I would match my PB from Sydney.  The question was how much could I beat it by?  With four kilometres to go, I looked inside myself for that extra bit of strength and stubbornness that usually helps me lift at the end of a race.  Much like federal funds allocated to Tasmanian public education, it was nowhere to be found (we're still waiting, Mr Hodgeman), and I really struggled to find another gear.  The best I could manage was to try to hold on to the pace I had.  We crossed the bridge finally and began the final effort along Flinders Street.

​I cheered as I ran out onto MCG, but my voice was drowned out by the thousands of supporters in the stands.  I had pretty much given everything I had to this point, so I allowed myself to slow fractionally to soak up the final seconds of the run and make the most of the atmosphere of the final lap. I crossed the finish line with a new PB, having taken more than half a minute off the time I had set a month earlier.  I have set a few PBs this year but this one really felt good.  The pigs in Animal Farm might tell you that all PBs are personal but some are more personal than others and this was certainly true of today’s run, which was made extra sweet for the uncertainty of how my body would hold up so soon after Sydney.   For official results for all competitors click here. 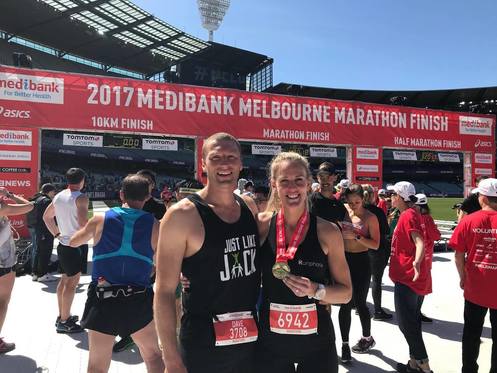 I stayed near the finish line for over an hour after the race, watching the various expressions of elation and relief as people finished.  At a personal level I was ecstatic.  Even though this was perhaps my seventh marathon, my enjoyment of crossing the finish line seems largely undiminished.  It is also quite special to share the moment others finish, even strangers when you can see how much it means to them, so the time spent near the finish line was really special.  At length though, it was time to gather our group together, go and celebrate.

I know I have said it before, but as ever I am deeply grateful to all the organisers, volunteers and spectators that supported the event.  Your contribution is not unnoticed or unappreciated, even if we don’t highlight it enough.  I am equally grateful to all the people who supported me personally through encouragement, advice and company in training.  Once again, your contribution to a runner’s success is not talked about often enough.

​On behalf of many runners who feel similarly, thank you one and all.

Bonus report!
For those that are interested in a more technical report that includes race plans, nutrition and preparation, check out this report I co-wrote  with Gabby for Runphoria.
Powered by