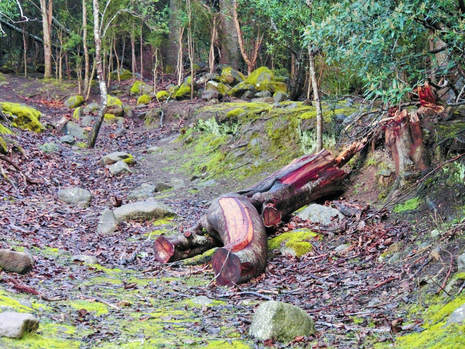 ​My friend, Porter, was in town and suggested we head for a walk on the mountain.  “I love it,” I replied, unintentionally imitating Trump Jnr’s response to offered Kremlin assistance during the election.

We met at the end of Lenah Valley road, with the plan to walk up to the Chalet following the Old Hobartians' Track, and if time permitted, continue to the summit.  I filled up my drink bottles from the rivulet which, considering how much noise it made, had surprisingly little water flowing through it.  I guess I’m used to things that have a lot more noise than substance after watching the short-lived antics of the Palmer United Party.

We set off along one of the numerous tracks and firetrails that twisted and intersected their way up this part of the mountain.  They must look like a Rorschach test from a bird’s eye view.  Noting that Corey Bernardi was in Tasmania to promote is brand of extremist fundamentalism, I hoped he didn’t have to fly over it on his way down (I’m pretty sure the poor guy either sees terrorists or men marrying their dogs whenever he takes a Rorschach test).

​After about ten minutes of following the Lenah Valley Rivulet, our track turned away more sharply than Malcolm Turnbull from his principles, and we began to climb.  The valley we were climbing was tucked into a real fold in the mountain, with the hillside rising on either side of us and blocking most of the direct sunlight as effectively and indifferently as Republicans block gun control legislation in the US Congress.  As a result, it was very damp and green, with large ferns, mossy rocks and logs the predominant features. 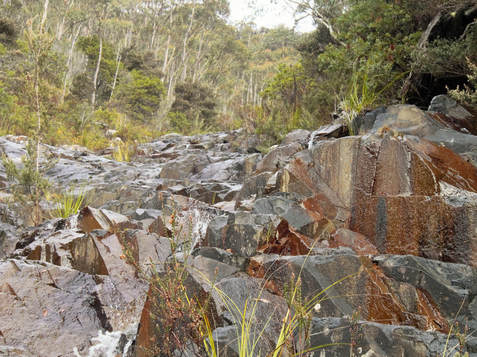 ​It was also steeper than I had anticipated.  The constant uphill was threatening to create blisters on my heels and my Achilles tendons were protesting as angrily as man-babies over the female Dr Who.  I was carrying a spare pair of shoes, but I couldn’t really be bothered stopping at this point, so we just kept hiking, chatting as went.  Away from the rivulet, it was extremely quiet.  Normally when I walk on the mountain, I meet heaps of people, but today it seemed as empty as Amber Harrison’s bank account, and despite the news of the trillion-ton iceberg breaking away from Antarctica, we saw no sign of people fleeing to the higher ground of the mountain throughout the day.

It was quite slow going.  The track was quite rocky as it wound its way up.  After about an hour I let common sense rule over stubbornness and realised that continuing to walk in my boots was just going to wreck my feet.  I still didn’t really feel like mucking around changing shoes, but decided the inconvenience would be worth it in the long run (I wish coal industry enthusiasts could follow this thought process).

I found a flat spot to stop and pulled my trainers out of my pack, managing not to fall over or step in the wet ground until I had my new shoes on.  The change of shoes brought immediate relief and I was a little chagrined to have waited so long to do so.  Porter was having no such troubles with his boots, but he is a tough man (I actually suspect he was the inspiration for Mel Gibson’s character of the same name in Payback) so this didn’t surprise me.

​A little further on, we came across the upper reaches of the New Town Rivulet, which was little more than a shallow stream over a flat section of rocks.  The circuitous track curved around again and recrossed the stream once more, where it was fed by a gentle water fall trickling down to our right. 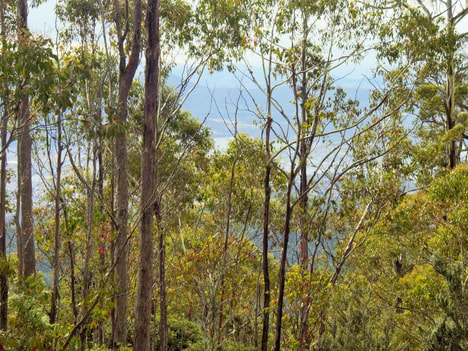 ​As we moved further from the water, the track flattened a little and we emerged from the shadow of the hill to our north.  The effect was noticeable in the vegetation around us, with the ferns and thick undergrowth disappearing and large gums beginning to flourish in their place.  The forest floor went from green to brown and the air temperature seemed to go up as well.  The sound of cars on Pinnacle Road some way above us occasionally filtered down towards us, while views of Hobart’s Northern Suburbs peeked intermittently through the straight trees that grew around us.

Old Hobartians' Track joins with Hunters’ Track a few hundred metres below the Chalet and then climbs quite steeply once more towards Pinnacle Road.  Instead of eating lunch at the Chalet, as planned, we found an open section in a boulder field just below the road, which provided much greater views of Hobart below us and also was more open to the midday sun.

It was now clear that our intentions of reaching the summit were premised on the kind of overoptimism Scott Morrison uses in his budgets and in reality there was no way we had time to add that section, since we both had things to get done in the afternoon.  But we have both been to the summit many times before so weren’t too fussed about not doing it on this occasion. 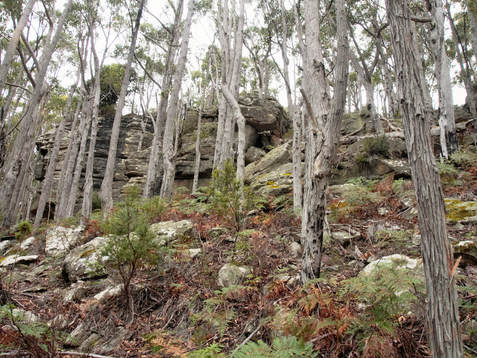 We decided to take an alternative route down, heading back along Hunter’s track towards Junction Cabin.  The last time I came down this track there was a fair bit of snow in the upper sections, so it was a bit different having an easy track to follow.

There were a few sections you had to be careful following markers across the boulder fields as a lot of the rocks were as wobbly as Malcolm Turnbull’s leadership.  The tall trees growing around us were occasionally punctuated by impressive rocky outcroppings.  After about half an hour of descent we reached a flatter section where the vegetation became thicker temporarily, but this soon reverted to normal as we made our way down to Junction Cabin.

We stopped for a quick drink of water and then set off down Old Farm Fire Trail, which felt more like a highway, compared the tracks we had been on up until now.  After a short period of steep descent, we turned left onto the Lenah Valley Track, which ambled its way gradually back across the hillside and into the same re-entrant that the Old Hobartians' Track had followed.

​We passed New Town Falls lower down from where we had crossed the same watercourse earlier and it was unsurprisingly just as dry here.  Soon enough we had reached the Lenah Valley Rivulet and followed the easy track back to the car park.  All up the walk took a little over four hours but that included me stopping to take photos fairly regularly and a short lunch break. 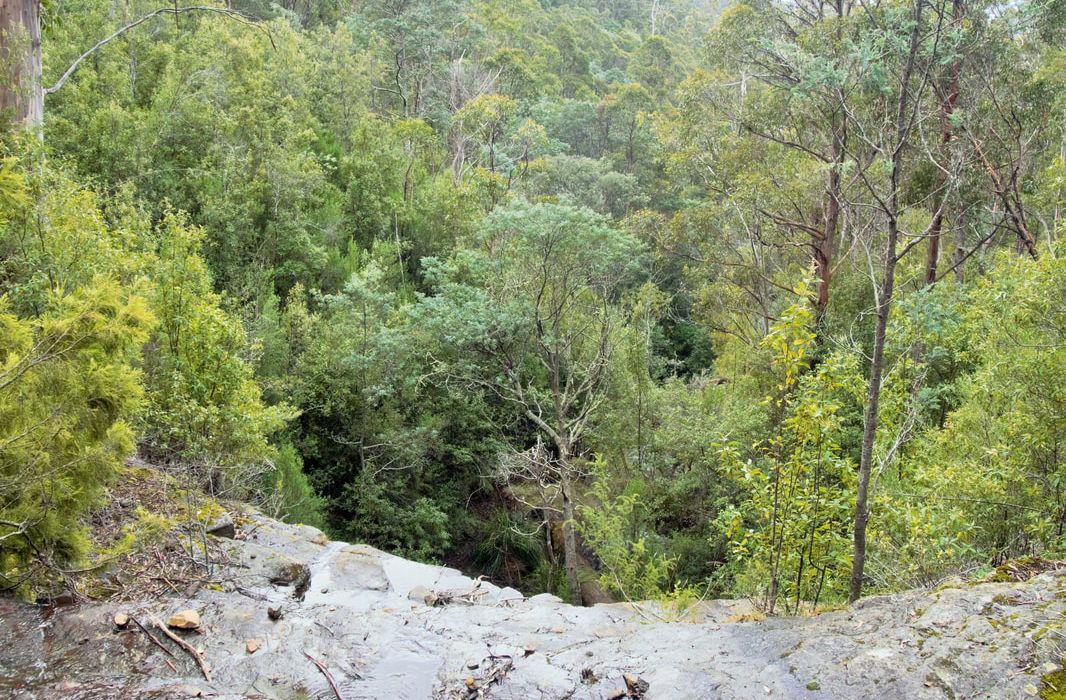